By Jim Feehan
The Register-Guard

Half a world away, a South Eugene High School graduate is helping in the tsunami relief effort in India.

Kelly Bauer has seen villages laid bare by the tsunami's pounding waves and witnessed unsparing generosity. A few days after arriving in Chennai, also known as Madras, Bauer toured the ravaged fishing villages and communities near Cuddalore, about 100 miles south of Chennai along the Bay of Bengal.

For the past two years, Bauer has been working for Lutheran World Relief, while based in Uzbekistan. She was scheduled to go to India on Jan. 4 to visit the agency's long-term projects. But when the tsunami hit and the extent of the disaster became clear, the organization asked if she could change her plans and tour the affected areas, she said.

In her first four days in India, Bauer, 31, put in 15-hour days visiting fishing villages near Cuddalore. Some villages sustained only minor damage, while others were devastated, she said.

In Pudhukuppam, a village of 600 families, the tsunami washed away 250 houses, killing 110 people, Bauer said.

Nothing but rubble lies between the ocean and the village's main road. Walking through piles of palm fronds and pieces of broken boats, Bauer was approached by villagers who cried out the names of loved ones lost, she said.

"They won't even look at the ocean now. Their entire lives revolved around the ocean, yet they can't bring themselves to look at it. They refuse to sleep in the village for fear of another wave," Bauer said in a telephone interview.

For now, they sleep in a school at a nearby village and return to their own village during the day to clear debris and repair the few boats that were not washed away, Bauer said.

This is the first disaster response trip for Bauer, who previously visited Lutheran World Relief project sites in Kenya, Uganda, Tanzania, Mali and the Philippines, she said. Prior to working for Lutheran World Relief, Bauer was a Peace Corps volunteer for two years in Uzbekistan.

Getting paid to travel the world and witnessing Lutheran World Relief's work first hand drives Bauer to live outside her comfort zone and, in doing so, appreciate life even more, she said.

"I see the hope in people's eyes and the dignity and pride they feel when they can lift themselves out of poverty. To witness this and then bring the stories back home - this is what I was born to do. I don't think there's a better job," Bauer said.

A few days after the earthquake and tsunami, Lutheran World Relief launched a campaign to raise $5 million for the worst natural disaster in modern history, said Lisa Bonds, vice president of external relations of 60-year-old relief agency based in Baltimore. 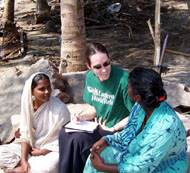 Caption: Kelly Bauer talks to women in a southern India village that lost 110 people. "The women just surrounded me. ... They simply need to talk," she said.

As of Friday, $4.5 million had been raised, with a little more than $2 million from contributions to Lutheran World Relief's Web site, Bonds said.

"That's pretty amazing, because we normally raise about $100,000 from online giving in one year's time," she said.

Lutheran Word Relief volunteers will remain in India for the next five to 10 years if necessary, Bonds said.

"Development efforts are never short term. Our goal is to make the communities better than when the tsunami hit. And that takes a lot of time, a lot of hard work and a lot of money," she said.

Two weeks after huge waves struck 11 countries in Asia and Africa, the number of missing was still rising. About 1.1 million people have been displaced in five of the nine hardest hit countries.

The overall death toll was reported Saturday to be 162,000.

Bauer isn't the only area resident volunteering with the tsunami relief effort.

On Saturday, Judi Kloper of Corvallis left home for a three-week trip to the same fishing villages in India's Tamil Nadu province that Bauer is visiting.

Since the tsunami struck, Kloper has collected about $48,000 for victims of the natural disaster. Kloper raised the money through her network of friends and associates at Journeys of the Heart, an adoption service based in Beaverton.

A former teacher, Kloper joined the staff at the adoption agency six years ago. She currently serves as the agency's India program coordinator, working with orphanages in India and Bangladesh to get children adopted in the United States. Kloper and her husband, Peter Owens, an agricultural building contractor, adopted three children from India.

The purpose of the trip is not to promote adoptions of children from these grief-stricken nations, Kloper cautioned.

"We have had lots of calls to adopt these kids, but that's not our purpose. Our purpose is to find the needs and help rebuild their lives," she said.

Just before leaving Uzbekistan for India, Bauer's host family made a donation to the relief effort in South Asia. The family's mother, a 55-year-old retired school teacher with five grown children, handed Bauer $400 of their life savings of $2,000, she said.

"It's humbling to receive a gift that means so much. But I accepted it gratefully and am confident Lutheran World Relief would make her incredible gift work as hard as anyone could," Bauer said.

On Dec. 29, Lutheran World Relief launched a campaign to assist tsunami victims in the rebuilding efforts in India, Sri Lanka and Indonesia.

This story has been posted in the following forums: : Headlines; COS - India; COS - Uzbekistan; Tsunami; NGO's; Service