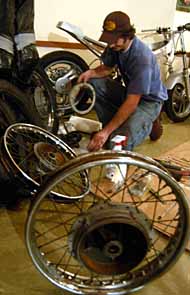 By DAVID McFADDEN
The Patriot Ledger

Caption: Ben Prime of Hingham works on the wheels of a motorcycle at the House of Prayer Lutheran Church in Hingham. The church is sending refurbished motorcycles to Africa to help transport food, clothes and medical supplies to AIDS orphans in Malawi. (DEBEE TLUMACKI/The Patriot Ledger)

HINGHAM - Inside the high-ceilinged fellowship hall at the House of Prayer Lutheran Church, a group of local men, young and old, are busy planting seeds of hope for a distant country seared by disease and desperation.

The men are painstakingly rebuilding and reconditioning two vintage motorbikes that will soon help ferry food, clothes and medical supplies to thousands of AIDS orphans living in Malawi, a small southern African nation that's one of the world's least developed.

‘‘It's a subsistence economy where the smallest hand gets the least amount of food,'' said Garry Prime, a local entrepreneur and a 1960s-era Peace Corps volunteer in the country of 11.9 million. ‘‘Children live with struggling grandparents or other surviving relatives because AIDS has destroyed a generation of adults.''

In a group of 37 rural communities known as the Malawi Children's Village, two well-built motorbikes can help make the difference between life and death, said Prime, who helped found the village collective in 1996 with other former Peace Corps volunteers formerly based in the country.

‘‘I had recently talked to Garry Prime about his work in Malawi and there was this immediate understanding that Bob's project could help,'' the Rev. Sinnot said.

Shortly before winter break, the Rev. Sinnot gave his young parishioners an interesting option of how they might spend their school vacation: play video games, watch the snow fall or learn how to build motorcycles to send to the needy in Africa.

In anticipation, Daly, 53, a union electrician who's been rebuilding motorcycles for more than three decades, brought his two gleaming 1971 Triumph 250 cc motorbikes to the church hall.

After only a few sessions, the volunteers, several of whom had never worked on a motorbike's engine before, are currently in the process of retrofitting the classic British machines from top to bottom.

On Wednesday night, about 10 eager volunteers hunched over repair manuals, or used greasy hand-tools to disassemble front wheels and put on new tires and wheel bearings sealed in rubber.

Daly, who drag raced motorcycles during his youth in Dorchester, offered expert hands-on instruction to the volunteers as they worked. Looking over at a group of three young buddies working on a set of wheels, he said, ‘‘I love teaching and I love motorcycles, This is just a perfect fit.''

Prime's 20-year-old son, Ben, was one of the young volunteers enthusiastically rebuilding the Triumphs, fitted with plastic body work to take the wear and tear of riding on Third World roads.

‘‘I enjoyed motors and motorcycles, but I've never worked on them before,'' Ben Prime said. ‘‘This is the best way of learning how to do it that I can think of. It's a blast.''

Daly and Garry Prime estimated that in a couple of weeks the dirt bikes will be ready to be shipped to Malawi Children's Village so volunteers there can have some reliable transportation, especially in the treacherous rainy season.

‘‘The paths are insurmountable over there in bad weather,'' Prime said. ‘‘Motorcycles are far more versatile. If a child needed to get to a hospital in the rainy season, you have to transport them on a bike.''

Due to the generosity of an unidentified businessman, the two motorbikes will be shipped to Malawi for free. Daly plans to include spare tubes, cables, gaskets, wheels and repair manuals in with the machines.

‘‘People have just been great about chipping in for this project,'' Daly said proudly. ‘‘Besides all the volunteers helping out, we've gotten $5 here, $20 there from people. All total, we've gotten about $2,500. It's been great.''

Daly hopes to expand the program, which any interested person is welcome to attend at the Main Street church. ‘‘There's a thousand of these kinds of bikes sitting in people's basements,'' he said. ‘‘We just need to find them.''

David McFadden may be reached at dmcfadden@ledger.com.

This story has been posted in the following forums: : Headlines; COS - Malawi; Service; Motorcycles