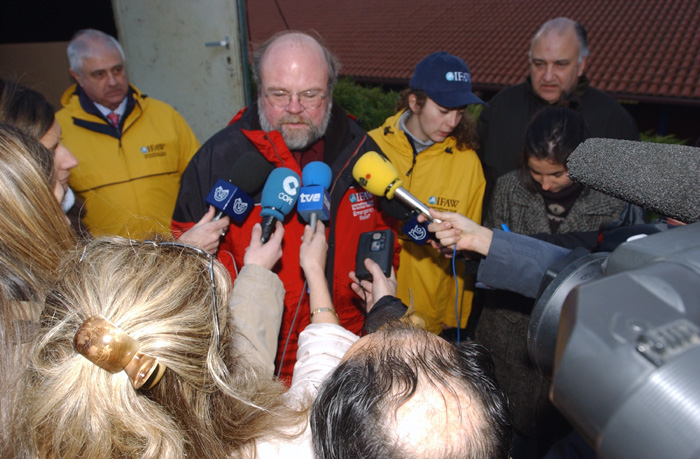 Contact: Chris Cutter of the International Fund for Animal Welfare, 508-744-2066 or ccutter@ifaw.org

IFAW has deployed emergency relief teams of veterinarians and animal care experts from Australia, China, United Kingdom and the United States to work collaboratively with local groups in affected areas in India, Sri Lanka and Thailand.

"This is a unique operation where IFAW and local animal welfare groups have come together to help animals and people in this time of unprecedented need," said IFAW President Fred O'Regan. "Animal welfare and human well-being are not separate concerns. They are inextricably linked and core to IFAW's mission."

As fears of disease outbreaks intensified due to unsanitary conditions created by the tsunami, a massive vaccination program began in the coastal villages of north and south Madras, India and stretching up to areas in Mahabalipuram. Over 500 cattle and goats have received vaccinations against such diseases as foot and mouth, blackquarter, hemorrhagic septicemia and tetanus. Hundreds of abandoned dogs are being vaccinated against common canine infectious diseases including rabies and tetanus in these areas.

Off the Tamil Nadu coast, on an island near Cuddalore, in southern India, IFAW is caring for more than 50 cattle and a few hundred goats marooned on the barren sand banks without food and water due to the tsunami. Nearly 500 of the 1500 inhabitants of the now desolate island were washed away in the tsunami. Those few survivors who escaped could not take their livestock as they fled the island using broken fishing boats. The IFAW team is now camped on the island providing care and feeding these animals until they can be reunited with their owners.

"For many survivors in these areas, their livestock has become their lifeline. By saving their animals we are literally saving their lives," said Anand Ramanathan, IFAW's Emergency Relief Operations Manager.

In addition to efforts in India, an IFAW sponsored stray dog vaccination drive is under way in Sri Lanka. In Phuket and Khao lak, areas in Thailand devastated by the tsunami, IFAW is providing food and medical care to homeless companion animals and livestock. IFAW is also using a mobile veterinary clinic based in Bali in Indonesia to bring mobilize supplies of food, water and medicines to animals in Banda Aceh, one of the coastal towns most devastated by the earthquake and tsunami.

With operations already underway to bring disaster relief to companion animals and livestock, IFAW working in partnership with the Wildlife Trust of India, is undertaking wildlife and habitat disaster assessments in coastal wildlife refuges in southern Tamil Nadu and the Anaman and Nicobar Islands. Wildlife habitats -- especially endangered sea turtle nesting areas, coral reefs, mangroves, and wildlife refuges that are generally abundant in biodiversity -- are presumably devastated. These field assessments will help identify opportunities to develop long-term strategies for future wildlife habitat restoration efforts and for involving local communities in conserving their biodiversity.

To support IFAW's relief efforts or to receive updates on our progress, visit the IFAW web site at http://www.ifaw.org.

Founded in 1969, IFAW is an international animal welfare and conservation organization that works to protect wild and domestic animals and to broker solutions that benefit both animals and people. With offices in 15 countries around the world, IFAW works to protect whales, elephants, great apes, big cats, dogs and cats, seals, and other animals. To learn how to help IFAW protect animals, please visit http://www.ifaw.org.

This story has been posted in the following forums: : Headlines; COS - Swaziland; NGO's; Tsunami

Dear,
having come to know about you through any source.I concern your attention to Asian Earthquake,mostly animals are affected by it.animals have worst stuation in these areas.we are working for relief of animals.I tell you,your organization can work here.you can work with us.