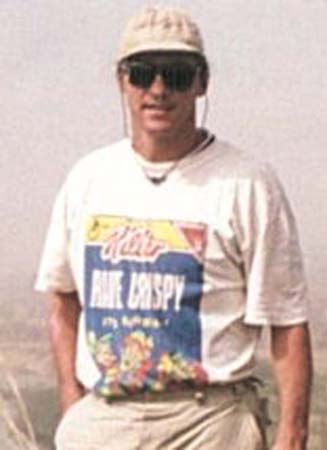 Tsunami Hits Those Close to Home

Agatha Sherman of Rockham, feels she is very lucky. A little over a week ago, Agatha sat patiently waiting for word on her grandson Tod Bruning, a United States Fulbright Scholar based in Sri Lanka. On Dec. 27 Tod sent word to his family via email stating that he was alright.

Bruning lives in the hills in a suburb at the southeast part of Colombo, Sri Lanka completely out of harms way when it (the tsunami) hit. "In fact, I wasnĺt even aware anything was amiss until Sunday afternoon when I saw the canal outside my office was flowing the wrong way," said Bruning.

Tod also feels he was very lucky. He had originally planned to head south to his favorite beach at Tangalla on Saturday morning, but because he had gotten the flu, he just didnĺt feel like traveling and was actually bummed about it. Now he is just thankful he got the flu, because Tangalla was totally wiped clean. There is nothing left of the little strip of rest houses on the beach where he was headed, along with the other rest houses along the coast.

There is a main road that links Colombo with nearly every point south of the island and runs right next to the beach for almost the entire way. That road is gone and the entire southern end of the island is isolated. A railroad that runs alongside the road was also destroyed. The only safe way to get south now is by going through the mountains and approaching it from the north.

"I lost friends, and nearly everyone on the island has been affected. The budding tourism industry, just recovering after years of conflict has been devastated," said Bruning. Normally, Sri Lankaĺs weather is mild and storms are very rare. If they do have a storm it is usually not violent. Because of the wonderful weather they have been building the hotels right on the beaches. The people on the island had no chance against the 30- foot- wall of water that came crashing down on them a week ago, Sunday. Boats were flung inland, many were destroyed and those that were not are in need of repair.

Tsunami is a Japanese word with the English translation, "harbor wave."

As a United States Fulbright scholar Tod works with the Sri Lankan governmentĺs Information Communication Technology Agency. ICTA was founded in 2003 for the express purpose of implementing the E-Sri Lanka Initiative. Bruning is to be there until July 2005 assisting the ICTA with devising a content development strategy.

His career focuses on studying and implementing applications of information technology to improve the lives of people in developing countries.

Tod became interested in ICT during a stint with Source Inc. in Dallas, TX selling telecommunications equipment in the early 90ĺs. Bruning loves the idea of making a difference in the lives of other people, but the corporate lifestyle quickly wore him down. "A taste of overseas life as an undergraduate working for the Office of Economic Development in Brisbane, Australia had left me deeply unsatisfied with the same four walls day in and day out," said Bruning. "To be able to look up and quite likely see something I have never seen before is what has always attracted me to Far Away Places with Strange Sounding Names. "

On Todĺs way to work one morning he saw just that ľ a 7- foot monitor lizard in the canal outside his office. He was completely unprepared for the sight of a lizard that big. He lives for this kind of thing.

In 1995 Bruning joined the Peace Corps as a Small Enterprise Volunteer, and was sent to the far corner of Ghana. He was assigned to work with a regional chamber of commerce. When he arrived in Ghana Tod asked them what they wanted him to do; they said they wanted to learn computers, so he became a computer teacher.

Tod left the Peace Corps after three and a half years and he toured Africa doing this and that. Six years after leaving American soil, Tod boarded a plane and returned to the U.S. to obtain his degree in International Development. Bruning has also been a finalist in the Global Bangemann Challenge. The Bangemann Challenge is a competition between European cities in the use of IT in various fields of public administration. The trophy is a split globe with a mat surface, colored like land and sea. The surface inside the division is polished and has a gilded concave center. The trophy shows a global process, one that ennobles at the same time as it spreads itself like seed.

This is a very prestigious honor and his mother and grandmother joined him overseas for the presentation of the awards.

It seems truly amazing at what this 40 -year -old from Pleasonton, TX has accomplished. Go to a search engine, type in his name and links pop up everywhere. This is what his mother Connie Catron had to say about her son, "Tod has always been one to set a goal and go after it until he gets it; from raising money by gathering glass to sell for recycling to pay for his airfare to visit his Sherman grand parents (Redfield) when he was 10 years old, to being commander of the "Fish Drill Team" at Texas A & M, or working in Australia, and going to "faraway places with strange sounding names." He finished his Masters in Internet Technology for developing countries this past summer and as one of his master courses, he spend the summer in Costa Rica for disaster training in 2003. So what he is doing now seems to be a culmination of all he has worked at! We are very proud of him."

Tod had planned on going to the islands to help out but ended up staying in Colombo and attaching himself to an NGO called Sarvodaya. According to Bruning the Governmentĺs response to the tsunami has been haphazard and slow, so he decided to see what the civil society organizations were doing. Sarvodaya is the countries largest community-based NGO and has been one of the first to respond to the event. Tod is helping them out with their ICT needs at the main office. He then was co-opted to help coordinate ICT aspects of national relief efforts, working with multilateral and bilateral organizations.

Sarvodaya has a system set up to collect payments online through credit cards or bank transfers. They are using that money to purchase critical supplies such as medicine to treat waterborne diseases, portable water, prepared foods, and blankets and much more. Tod has also been a key player in setting up missing personĺs databases. "Sarvodaya has stated they intend to take in ever orphan they can find," said Bruning.

Bruning stated, "The stats get worse by the day. The devastation was so complete and profound that they wonĺt know the true extent of the tragedy for some time yet." Tod will be staying in Columbo to help coordinate ICT aspects of the relief efforts, so will not be traveling to any affected areas anytime soon.

Agatha also received word that Todĺs brother, Chris and his fiance were close to the tragedy too, but are alright. Chris, who is in imports, decided to vacation while in Thailand and was there the day before the storm broke out. Apparently, they had someone looking out for them as well, because there were no rooms available on the island. They left and went to another island away from the affected areas. "Our family is very lucky, and we are glad they are both okay said," Agatha.

A word from Tod Bruning: ôDonations can be sent through the International Red Cross. Thanks to all of you who have sent emails asking about me. Iĺll be helping out with the relief efforts, so may be out of touch for a while. Please remember to say a prayer for those less fortunate.ö

I could not have said it better myself. Keep up the good work, Tod Bruning. We are all very proud of you. You are another one of Godĺs angels on earth.

This story has been posted in the following forums: : Headlines; COS - Ghana; COS - Sri Lanka; Tsunami