Amanda Rogers will be stationed in Guinea, West Africa, as a volunteer with the U.S. Peace Corps 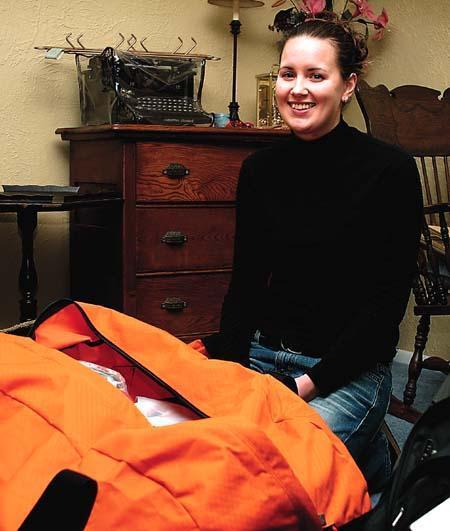 Amanda Rogers will be stationed in Guinea, West Africa, as a volunteer with the U.S. Peace Corps

The adventure of a lifetime: Amanda Rogers is off for a stint in the Peace Corps - in Africa
By Ben Raymond Lode
The Springfield News

Caption: Amanda Rogers, shown packing for her trip, says her most important possession when she gets overseas will be her camera, which she'll use to document the experience. JOHN GUSSENHOVEN/The Springfield News

Amanda Rogers from Springfield was packing her bags at her parents' house last Thursday.

It seemed obvious she was itching to get started on the adventure of a lifetime.

For 27 months, beginning this week, the 25-year-old graduate of Springfield High School and Oregon State University will be stationed in Guinea, West Africa, as a volunteer with the U.S. Peace Corps.

The assignment, which will give Rogers a prime opportunity to help others in need, is likely to be a life-changing experience.

That's something the energetic young woman is fully aware of.

"I think it will be real good for my own personal growth," said Rogers.

But experiencing daily life on a different continent is also attractive to Rogers, whose degree is in natural resources management.

"I'm most excited about just seeing how people in developing countries live on a day to day basis," said Rogers, "because that's how most people (on the planet) live."

According to World Bank estimates, in 2001, 1.1 billion people had consumption levels below $1 a day. Another 2.7 billion lived on less than $2 a day -- figures that clearly illustrate the gap between developing and industrialized countries.

While Rogers will spend much time helping people, she will also conduct research for her own graduate thesis while in Guinea.

That's because she is involved in a Peace Corps partnership with roughly 100 colleges and universities across the U.S., called Master's International.

PEACE CORPS from 1A

According to Rogers, who will use her own education to help Guineans learn about sound agricultural practices and sustainable development, the program offers academic credit and financial incentives to volunteers during or after Peace Corps service.

One of the big challenges of being a Corps volunteer for many, in addition to being removed from the typical luxuries of modern life in industrialized countries, is learning a new language.

In Guinea, as in many of the countries on Africa's west coast, the people speak a localized version of French.

Rogers, who took French in high school, said she will go through a three-month language course while living with a host family in Carnaky, Guinea's capitol.

"Hopefully I can use some of my high school French," Rogers said.

While the Corps sends people to remote corners of the world, the perception that they send people just about anywhere isn't necessarily true, according to Rogers.

"I think the biggest myth is that the Peace Corps will send you to just any country," she said.

"I think they try to take care of our well-being," she said, adding that countries considered dangerous are taken off the list of countries volunteers are sent to.

When Rogers left for Philadelphia to meet other volunteers last Friday before departing to Guinea, two bulging orange Samsonite bags full of clothes and other essentials accompanied her.

But Rogers' most prized possession, besides a plethora of books, was her camera.

That will allow her to document experiences so that she can share her impressions from a land far away with families and friends upon her return to the motherland.

Guinea, a developing country sandwiched between Guinea Bissau and Sierra Leone -- the latter a recent hotbed of civil unrest -- is rich in natural resources, holding 30 percent of the world's bauxite (aluminum ore) reserve, according to the CIA World Fact Book.

But the country is poor and has suffered from unrest spilling over from neighboring war-torn Sierra Leone and Liberia, threatening stability and creating humanitarian emergencies in the country, the fact book states.