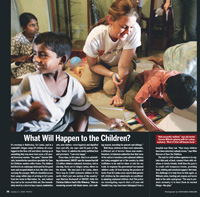 A Warrenton resident's humanitarian work put her in People magazine this week.

Hours after a tsunami swept away more than 150,000 lives in Southeast Asia, Tammie Willcuts, 34, boarded a plane for Sri Lanka. Her husband, Stu, followed a week later, forgoing a planned meeting with President George W. Bush and Secretary of Defense Colin Powell.

Mrs. Willcuts works for Save the Children, one of the world's largest non-governmental organizations. For the past three weeks, she has provided emergency services to people in Sri Lanka.

She sets up programs to ensure people receive food, clothing, blankets, mattresses or whatever they need.

More than 33,000 families lost their homes in the Matara region, where she stays in "a tiny little place." Children are most vulnerable, Mrs. Willcuts said in a telephone interview Wednesday.

Her sister scanned in a copy of the picture in People magazine and sent it to her last week via e-mail. It depicts Mrs. Willcuts coloring with children in an orphanage.

She spent two weeks on the east coast of the island before heading south to Matara. She spent four days in the capital city of Colombo with her husband, stationed there with Air Serv, a relief organization based in Fauquier.

Mrs. Willcuts spent 1994 to 1996 in Sri Lanka as part of the Peace Corps. She speaks the language, Singhala, fluently.

She frequently goes to disaster areas. Mrs. Willcuts has worked in the Balkans, the Middle East, Jamaica and Africa. When she can stay in Warrenton, she volunteers with the local Red Cross.

Mr. Willcuts, 54, is president and CEO of Air Serv, a nonprofit agency that uses planes and helicopters to help those in dire situations. Air Serv pilots transport doctors, nurses and assessment teams to isolated areas so they can do their jobs. The agency operates from an office in New Baltimore.

Mr. Willcuts spoke Monday from Sri Lanka about the destruction and heartbreak spawned by the tsunami.

"It's incredible that this happened in the space of 20 minutes," he said. "I walk down the street and see the pain in people's eyes. What can you do except give them a hug?"

The Willcuts met in 1998, while providing aid to families left homeless by a war in Azerbaijan. Mr. Willcuts proposed a year later in a refugee camp in Kosovo.

"I took her up to the top of a mountain in Albania," he said of the proposal. "Lucky me, she said yes."

The Willcuts spent most of November and December at home in Warrenton, enjoying a quiet Thanksgiving and Christmas. Most of the time, though, they catch sporadic moments with each other in distant lands.

"They've dedicated their lives to caring for disillusioned people who wouldn't get help otherwise," said Air Serv's chief pilot Kurt Neuenschwander. "They do spend time together here in Warrenton, just not during emergencies."

"He just asked questions and thanked us," the pilot said.

Mr. Willcuts heads to Indonesia on Jan. 14. Mrs. Willcuts will either follow or remain in Sri Lanka, depending on where she is needed.

This story has been posted in the following forums: : Headlines; COS - Sri Lanka; People Magazine; Tsunami