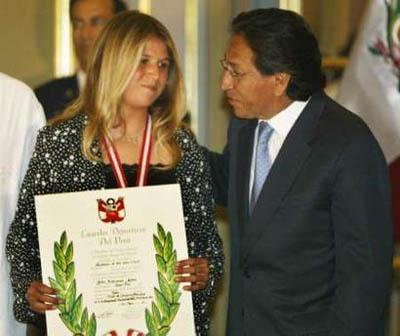 Peruvian surfer Sofia Mulanovich (L), the 2004 World Champion (WCT), is awarded the sporting palms, the highest honor for Peruvian sportsmen and women by Peruvian President Alejandro Toledo (R), at the government Palace in Lima, January 12, 2005. Mulanovich was named the World Championship Tour (WCT) World Champion for 2004 after placing second at the Roxy Pro competition in Ali'i Beach Park on Oahu's North Shore in November. Mulanovich, 21-years-old, finished 2004 as the top female surfer in the world and also the first South American of either gender to capture a world surfing championship.

This story has been posted in the following forums: : Headlines; COS - Peru; Surfing; Sports