During his three years as a Peace Corps volunteer in a fishing village in Malaysia, Lars Leader learned a lot about the fragility of life for those who make their living from the sea 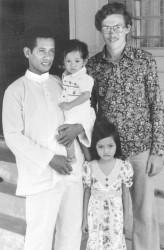 During his three years as a Peace Corps volunteer in a fishing village in Malaysia, Lars Leader learned a lot about the fragility of life for those who make their living from the sea

Caption: Lars Leader, at right, is pictured with a Malay teacher, Mohamad Zaini, and his children.
— Contributed photo

VALDOSTA — During his three years as a Peace Corps volunteer in a fishing village in Malaysia, a Valdostan learned a lot about the fragility of life for those who make their living from the sea.

Lars Leader, an assistant professor in the Department of Curriculum and Instructional Technology at Valdosta State University, spoke Friday about South Asia, where he once taught, and where thousands lost their lives last month when an earthquake unleashed tsunamis in the Indian Ocean.

“Initially, I was worried about my wife’s family because my wife (Nadra Leader) is from Sumatra,” he said. “The epicenter was on the same side of Sumatra as the area where my wife’s family is from.”

It would be two days before they learned her relatives were all safe.

“Most of her family live in a mountainous area while only a few live in the coastal capital of the province, Padang,” he said. “Fortunately for them, the tsunamis spread to the north, east and west with little effect to the south.”

Leader said the last major tsunami in that area, in 1833, caused extensive damage in that province called West Sumatra where his wife is from.

“One of the reasons the people did not recognize that a tsunami was coming after the earthquake this time is the great length of time since the last one occurred,” he said.

Watching the destruction the tsunami wreaked on television, Leader’s thoughts focused on the people who live on the coasts in much of Southeast Asia.

“For the most part, they live from fishing or subsistence farming. These are people at the lowest socio-economic levels of the countries they live in.”

“People living in the fishing village were mainly Malays. The Malay culture extends throughout much of the coastal area in Malaysia, Singapore and northwestern Indonesia.

“One reason I stayed an extra year was because I enjoyed the culture of Malaysia and the friendships I made there. The Malaysian people are very open and friendly toward visitors which is a normal way of life throughout Southeast Asia. An example of this could be seen in the assistance that local Thai people gave to foreign victims of the recent tsunami.”

Similar to the fishing village where he lived in Malaysia, many of the people along the affected coast of north Sumatra live in houses built of wood and raised above the ground, which is suitable to the tropical climate.

Leader says this makes the houses vulnerable to the forces a tsunami brings.

“It’s not surprising great levels of destruction occurred as they did. In some of the coastal villages in the northern province of Aceh in Sumatra, 70 percent or more of the buildings were destroyed.”

Leader says the province of Aceh is one of the less developed parts of Indonesia compared with places like Java.

“On the west coast of Aceh, only one narrow road connects most of the coastal villages. The tsunami not only destroyed housing but also this transportation link. This west coast of Aceh has connections to other parts of Indonesia by sea, but the effects of the tsunami silted the harbors where boats and ships would dock. So much of the area was completely cut off from the outside until helicopters arrived.”

“Many of the large trucks in the capital city of Banda Aceh were destroyed, and the drivers of some of those trucks disappeared in the waves.”

Aid has also been slowed to reach those in need in Aceh due to the historical isolation of the area, he said.

“The people of Aceh are devout Muslims and have a strong tradition of independence which has caused conflict with the national government of Indonesia. Initial delays of supplies to the area reflected the government’s need to loosen restrictions on entry to this area.”

Leader said there is a great need for immediate aid to meet the health and safety needs of people in Aceh and in the other coastal areas of the Indian Ocean where the tsunami hit.

“As commonly occurs with disasters, news reports decrease in number and interest is lost, but the redevelopment needs will be great. Without their boats and equipment that were destroyed, many people in these coastal towns will have no way to make a living.”

Leader said farmers on the coast will also have to deal with long-term effects — salt water from the tsunami waves making the soil unsuitable for crops perhaps for years.

“Here in the United States, we might very well ask why is this important to us. If for no other reason, providing sustained assistance can give people hope for the future.

“In Indonesia, as has occurred in other parts of the Muslim world, the foot soldiers for extremist groups such as al-Qaida are most easily recruited from communities where many feel hopeless. Redevelopment can help people gain control over their lives and their futures and foster self-sufficiency.”

A clearinghouse for aiding the earthquake and tsunamis victims in South Asia may be reached at http://inter

InterAction is an alliance of more than 160 U.S.-based international development and humanitarian nongovernmental organizations. If you or someone you know is considering making a contribution, either financial or material, this site lists all InterAction members who are accepting contributions for assistance. In addition, the guidelines for appropriate giving found at http://interaction.org/disaster/guide giving.html may help guide you in your donation.

This story has been posted in the following forums: : Headlines; COS - Malaysia; Fishing; Tsunami