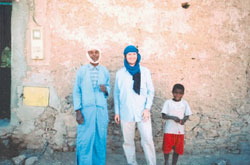 By Maggie Wolff Peterson
Special to The Winchester Star

Caption: Paul Negley of Winchester is with the Peace Corps in Morocco. His hut has electricity, but no appliances. He cooks on a portable electric cooktop. Photo Provided by Anne Jaeger

You could call Paul Negley an adventurer. After his 1998 graduation from Handley High School, Negley decided to backpack alone across Europe and was gone from August to December.

Paul Negley of Winchester (center) is with the Peace Corps in Morocco. As is the custom in his village, Negley wears long pants, long-sleeved shirts, and a head wrap.
(Photo Provided by Anne Jaeger)

You could call Negley an achiever. When he returned from his cross-continental trek, Negley entered Lord Fairfax Community College, with the goal of making his way into the College of William and Mary. He earned a grade point average of 4.0 and did.

Or, you could call Negley a humanitarian. With his college degree in government and philosophy, Negley entered the Peace Corps.

Today posted in Morocco, Negley lives in a dirt-floor hut and works against the spread of AIDS in Africa.

According to the Peace Corps, Morocco was one of the first countries in the world to invite American volunteers, under the international program initiated in the 1960s under President John F. Kennedy. A group of 53 surveyors, English teachers, and irrigation foremen arrived in 1963, and since then, Peace Corps programming in Morocco has been virtually uninterrupted, with more than 4,000 U.S. volunteers serving.

Today, the corps in Morocco focuses on public health and sanitation, but past projects have included such diverse pursuits as urban development and beekeeping.

Around 150 volunteers remain posted in the 172,200-square-mile country, at the northwest edge of Africa, where today, English is the official language of commerce.

However, the corps recognizes four official languages for Morocco, including three different idioms of Arabic, and separate regions of the country retain individual dialects.

“The desert oasis village I serve in is desolate,” wrote Negley, 24, in an e-mail.

Photographs show Ait Ouabelli, the village in which Negley serves, as a collection of small mud-walled buildings with dusty streets between. A nearby oasis, recognizable immediately by the cluster of green palms around it, is where the women of the village go daily while the men travel to nearby cities for work.

“He is in the most remote location of all the Peace Corps volunteers that are there now,” said Anne Jaeger, Negley’s mother, who visited her son in October. “But if he stands on the top of his hut, his cell phone gets through.”

The world in which Negley lives is a study in contrasts. In addition to his cell phone, he has a computer and e-mail, but they’re not always reliable. Messages to Negley often end up lost in cyberspace.

His hut has electricity, but no appliances. Negley cooks on the type of portable electric cooktop that a freshman might take to a college dorm. Indoor lighting comes from a single bulb on a long cord that is tethered to the wall.

“Some of the women at the oasis have cell phones on their hips,” Jaeger said. “And they all have satellite dishes. You see such extremes.”

In Marakesh, there is a McDonalds. There is a large store, like a Wal-mart, at which merchandise is abundant and prices are set. But there is also a traditional marketplace, crammed with small stalls in which hagglers settle prices on merchandise such as octopus on ice, and snake charmers lure vipers from open baskets.

“Just booth after booth of the most amazing things for sale,” Jaeger said. “Everywhere you go, people are bartering.”

For Jaeger, getting to Negley’s village required a long day in a small car. “We tried to squeeze in everything we bought for his hut,” Jaeger said. “We had to travel with things piled up on us, and on our laps.”

The Peace Corps had allowed Negley only 80 pounds of gear to equip his hut in Ait Ouabelli. After he arrived, he bought some rugs to cover the dirt floor and a piece of foam to put down for a bed. More creature comforts arrived with his mother.

She bought so much, Jaeger ended up leaving a suitcase behind. The car was stuffed and the route was dicey. “It’s the most dangerous driving I’ve ever seen,” Jaeger said. “They don’t obey any road rules. And there are camels everywhere.”

“We drove five and a half hours through a plague of locusts,” Jaeger said. “They were three and a half inches long, red, flying locusts. It was something biblical.”

A photograph made upon Jaeger’s arrival shows a small, white Peugeot plastered across the grill with long red smears of smashed insects. But in it, Jaeger is smiling.

Negley himself has been subjected to the local fauna. Three months after his arrival, he entered his hut to find a spider larger than his hand.

As is the custom in his village, Negley wears long pants, long-sleeved shirts and a head wrap. But he cannot help but stand out. He is a fair-skinned redhead in a village of black Muslims. Prepared for travel through five years of study in French, plus some ability in Arabic, Negley arrived in his village to discover the locals speak neither.

So, Negley learned the local Berber language, Tashelheit, and has made an ally of the sheik who leads his village. Occasionally, Negley is a dinner guest in the ruler’s home.

The sheik had Negley and his mom for tea while Jaeger was visiting. They met in the ruler’s lower domicile, which is his reception area for villagers. The highly sugared mint tea was presented only to Negley and Jaeger. The sheik couldn’t consume it, because Jaeger’s visit coincided with Ramadan, the month-long daily fast that Muslims observe during the ninth month of their calendar.

On another day, Jaeger was purchasing a drink from a vendor when one of the five daily Islamic prayers was called. The vendor left immediately for the nearest mosque.

“When the call to prayer comes, you just go,” she said.

The point of Negley’s 21/2-year mission is to improve health-care delivery in Morocco. Of the 40 volunteers with whom he trained, half were intended for health improvement, and half went to sanitation projects. One of Negley’s earliest successes was negotiating with the Japanese embassy in Marakesh for an ambulance for his town.

Additionally, Negley has worked with representatives of other international agencies to increase AIDS awareness in Morocco and prepare for National AIDS Awareness programming in December. “In the Morocco program, men and women volunteers often work in very rural areas and are able to reach and impact people in their homes, and at a village level, conversing in a variety of dialects,” Negley wrote.

Negley himself uses a bicycle to reach the three villages in addition to Ait Ouabelli that he serves. Another of his projects involves helping local women to develop indigenous industries, in addition to baskets they weave.

“He’s trying to come up with other things they can make with the resources at hand,” Jaeger said. “They’re very poor.”

Noticeably thinner than when he left the U.S., Negley has lost 20 pounds since going to Africa. But he has gained a wider world view, and Negley, who took the law school admissions test (LSAT) before leaving for Africa, now tells his mom that he might want to make international politics a part of his career path.

This story has been posted in the following forums: : Headlines; COS - Morocco; AIDS; HIV