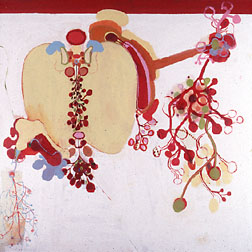 "Oh, don't go. I'm sorry, I've done for you." ... The words were not addressed to the crowd gathering about me. They were inside and spoken to no one but a part of myself. I was quite sane, only it was an oddly detached sanity, for I was addressing blood cells, phagocytes, platelets, all the crawling, living, independent wonder that had been part of me and now, through my folly and lack of care, were dying like beached fish on the hot pavement.

Loren Eiseley's regrets, addressed to the microscopic denizens of his blood stream after a fall, express an exceptional scientist's sense of wonder at life. It is a sense more often shared by poets and artists, although it reflects the personal bonds we all feel toward flesh and blood -- in ourselves and in the living world we cohabit. Dannielle Tegeder is among those uncommon painters who recruit such biotic empathies, delightful, disgusting, surprising and complex, to reveal bright fantasies of form and flow. "Flora (New Paintings)" is a play of brush and vision upon Tegeder's fascination with "proportion, order and color." Much of her art is in fact inspired by "bacteria, cells, DNA, viruses and other microbiological images." They emerge in new interpretations through "Flora (New Paintings)," on exhibit at Jan Cicero Gallery, Chicago, until November 25, 2000.

Biological form and pattern has become an increasingly frequent wellspring for art in recent decades, and it stands as contrast and response to the geometric focus of much modern art since the machine age. Which is not to deny that alongside currents such as Cubism, Contructivism, the various analytical and abstract approaches, some artists did investigate the soft, the symmetric, the curved and globular: expressions common to natural lifeform. It is, however, interesting that geometries of the exact and angular tend to proceed from cerebral analysis and theory. The eye neither sees nor dreams Euclidian, and ever changing nature often conceals fixable shapes in process and complexity. Tegeder knows the microscope as well as gross anatomies, and in viewing her paintings, one finds a kinship, certainly in shared inspirations and motifs, with artists such as Wassily Kandinsky and Paul Klee. And in her art, just as Paul Klee asserted: "The beholder's eye, which moves about like an animal grazing, follows paths prepared for it in the picture...." Klee went on to note:

The pictorial work was born of movement, is itself recorded movement, and is assimilated through movement (eye muscles). ... A man asleep, the circulation of his blood, the regular breathing of his lungs, the intricate functioning of his kidneys, and in his head a world of dreams, in contact with the powers of fate. An organization of functions, which taken together produce rest.

Tegeder's compositions strongly suggest gentle, rhythmic, even peristaltic waves and flow. This collaborates with stylized shapes of biology and botany, and together with a vibrant palette, evokes a sense of playfulness. Somewhat as in Eiseley's benevolent revelation, the facts of science are transformed to poetic art. Art historian Edgar Wind said of Klee:

In a half-apologetic tone he asks whether these are proper occupations for an artist: microscopy and paleontology. He excuses himself by saying that they set the artist's imagination in motion. The traces of these forms are indeed unmistakable in some of Klee's fantastic designs. And yet how strange that none of the biologists who showed Klee their microscopic preparations thought of enlisting his sensitive hand to record these structures in the interest of science, instead of letting him wander off to play with them only in fantasy. Klee's sly kind of humour is a precious bloom of Romantic irony: he made the most of being in a marginal position, and never pretended to be anywhere else, carefully avoiding the grand manner.

In Dannielle Tegeder's paintings, similarly, one finds graphic fantasy coupled with a 'sly kind of humour,' but Klee, in much of his work, lingered with a sharpness, an angularity of contour, while Tegeder's approach employs a softness more akin to Wassily Kandinsky, or Joan Miro. Tegeder does note Miro as an influence, as well as the work of Beatriz Milhazes, Monique Prieto, Amy Sillman, Florine Stettheimer and Terry Winters. Further, much of the sense of movement in Tegeder's paintings arises not just from the mobile-like balance of background color masses and the arrangement of large color elements, but also from clustered and branched smaller element ensembles -- a sort of Brownian motion, seemingly a jostling of tiny objects against each other. This latter trait is particularly effective in works such as Astrocyted Joy (1999:23"x23") or Sapphire Blue System (2000:48"x60"). Tegeder's very lively organization of compositional elements often creates the impression of a coroner's bright cache floating about a coral reef -- kelp and kidneys, adenoids and anemones (as in Epithelium Epiphany) -- A hallucinatory aquarium of remembered and familiar forms: the shapes of fauna, flora and of body parts.

The artist notes that her color schemes "are partly derived from popular American culture" and cites as examples: "A dress in a store window, Easter decorations, and candy...." Many years ago a National Geographic artist, in documenting deep-sea life, found his renderings too harsh to convey the delicacy of hue among his subjects. An accidental exposure to rain, by happy chance, brought the desired final effects. Dannielle Tegeder notes in her gallery statement: "Although bright colors predominate my paintings, I often counter them with softer hues to set a meditative mood." Dannielle Tegeder does characterize her paintings as a form of 'Pop Biology,' but in fact this color selection, and her subsequent manipulations within it, owes as much to authentic nature as to popular synthetics. These paintings delight, and that animative pleasure may signal a happy confluence: a choice of material and motifs from the natural sciences which resonate to natural preferences now widely exploited by mass culture. If animal nature is wary of the all too novel and the man-made, recognition of common archetypes that underlie both jellyfish and vine elicit ease and curiosity.

Artists such as Dannielle Tegeder would seem to signal a reversal of what Edgar Wind, in Art and Anarchy (1985), elsewhere saw as less fruitful, previous directions in art:

It is characteristic of the present disjunction that if artists seek contact with science at all, they are likely to chose what seems to them the most advanced and adventurous kind of science, but what is in fact the least profitable to them. Neither quantum mechanics at the one extreme, nor psycho-analysis at the other, can be of serious use to a painter, whereas he might draw real inspiration from the morphological sciences which he neglects. As for the place of the accidental in art, it hardly seems necessary to underpin it by a set of false scientific analogues, since a cautious admission of the unexpected has long been part of the artistic discipline....

Tegeder's work is certainly not the result of accidental process, but it does reveal wise and effective artistic instincts throughout. The artist starts with a diagrammatic base, a scientific representation, and often turns to "images of isolated, dissected body parts from medical books." Tegeder's ability to synthesize and harmonize congruities of form and hue over so diverse a spectrum of source material -- from mundane objects and Pop artifact through to diatoms and pancreas -- nonetheless results in an art which evokes Disney animation cells in free association. The potentially macabre becomes festive. She achieves a striking, and personal style and although she works primarily in oils, her art carries that individuality through gouache, ink, colored pencil, marker and pastel. There is little in her art which stands out as eclectic, even though she draws inspiration from "astronomical charts, 18th century Dutch floral paintings, Indian miniature paintings, historical, medical and botanical illustrations, and Rococo art. In 1994, as a Peace Corps volunteer to Ghana, West Africa, she taught art classes among the Ashanti, and in 1997 she was a visiting artist at Baroda University in Gujarat, India, and those ventures may well also contribute to a distinct color identity, and graphic, decorative sense.

If one accepts that 'decorative' need not mean decoration, but rather a strong sense of visual harmony -- even unity -- of open-ended associations, then Tegeder's art rests upon more than just visual pleasure or psychology for its strength. Wassily Kandinsky, in Concerning the Spiritual in Art, anticipated such: "It is possible that towards the close of our dying epoch a new decorative art will develop, but it is not likely to be founded on geometrical form." Kandinsky concluded: "The forms, movement, and colors which we borrow from nature must produce no outward effect nor be associated with external objects. The more obvious is the separation from nature, the more likely is the inner meaning to be pure and unhampered."

There is an imbedded logic and a marvelous, and natural impulse to her paintings, and much of this work builds on a wonder at life and its materials. It is a call which Loren Eiseley responded to directly, and which fascinated poets like Hugh MacDiarmid:

There is the marvel that results in each secreting tubule
Meeting a collecting tubule
Accurately end to end
Each complete duct is composed of two sections
Performed from different embryological elements But guided to meet each other by a "call,"
A "call" so wonderful that each kidney tubule
Meets each ureteric tubule end to end
And so completes the canal.

Colorful, lively, often as perplexing as it is pleasing, Dannielle Tegeder's art intuits the fingerprints the living leaves in shape and form. This art offers, not geometries or abstracted formulas, but an instinct found in dreams and fantasies, and in the smallest motioned patterns of biology. There is a delicacy about this work, and, as the artist has declared, it may very well "juxtapose our inner mortality with modern society's obsession with pop culture through the combination of biology and color." (In Art Scene, Chicago 2000, (Crow Woods Publishing: 2000)).

In addition to Tegeder's four larger works on the East wall of the front exhibition room, there are three small format works on the South wall. The paintings of Dannielle Tegeder will be on exhibit at Jan Cicero Gallery's "Flora (New Paintings)," together with work by Sue Johnson, Victoria McAlister, and Barbara Rogers, until November 25, 2000.

Dannielle Tegeder studied at the Amsterdam School of Fine Arts, The Netherlands in 1991. She graduated with honors from the State University of New York at Purchase in 1994, and received her MFA from the School of The Art Institute of Chicago in 1997. She currently teaches at SAIC and the Illinois Institute of Art.

Dannielle Tegeder is featured in Art Scene, Chicago 2000 (Crow Woods Publishing: 2000) which gives a biography, artist statements, and three color illustrations of her art. Additional paintings by Dannielle Tegeder may be found at http://www.paintingsdirect.com/bin/selection.cgi?artist=Dannielle%20Tegeder&Submit=Go

Jurek Polanski has previously written and art edited for Strong Coffee in Chicago. He's also well known and respected among the Chicago museums and galleries. Jurek is currently a Visual Arts Correspondent for ArtScope.net.

This story has been posted in the following forums: : Headlines; COS - Bangladesh; Art; Painting