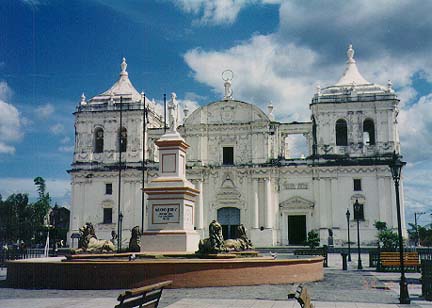 MATAGALPA, Nicaragua -- Standing beside a dirt road that winds up a green mountain, Hipólita Gómez, 50, put the coffee beans she had picked that day into a single burlap bag.

For three decades, she has walked the steep fields, picking the red and yellow berries that fuel the second-largest global business on earth.

She has never been to school, lives mostly on rice and beans, supplemented by an occasional tortilla, and has outlived eight of her 17 children. She complains of "pain in my bones" from the stooped labor.

"The work helps us to survive anyway," she says, smiling diplomatically. "But I'm not sure how much longer I can continue."

The work has always been backbreaking, and now it increasingly produces little pay. From Latin America to Africa, poor farmers like Gómez are suffering from the impact of a global glut of coffee beans that has driven bulk prices to their lowest levels in 100 years.

Three years in the making, the coffee crisis is having a devastating impact in countries like Nicaragua that built their economies on the commodity. Banks have crashed and, in a scene reminiscent of the American Midwest of the 1980s, thousands of farms have been seized in foreclosure.

Hundreds of thousands of Latin American plantation workers have been forced off land into squatter camps. Others, like Gómez, are working at bare-subsistence wages.

"After the coffee crisis, the whole panorama of this region changed," said Harmhel Antonio DallaTorre, whose nonprofit group provides aid to farmers in Matagalpa. "It has caused the vast majority of the people to live in extreme poverty. Many take their children out of school to help them pick."

Opponents of globalization have seized on the plight of the farmers as a prime example of free-market policies gone awry. Other experts say that 25 million farmers, unregulated and clamoring to get ahead, have contributed to the crisis.

"The glut is not because of coffee roasters taking advantage of the poor," said Jay Molishever, a spokesman for the National Coffee Association, an American industry group whose members include the "big four" roasters -- Kraft, Nestle, Procter & Gamble and Sara Lee. "It is because of growers capitalizing on whatever advantages they could find."

The market has changed drastically in recent years. Brazilian farmers learned how to produce more coffee per acre by adopting new technology -- output is expected to skyrocket this year to 40 million 132-pound bags, from 30 million. Then, in the 1990s, Vietnam entered the coffee trade, expanding its share of the market to 8 percent from 1 percent.

A devastating Brazilian frost in the mid-1990s led to a brief price spike that prompted countless coffee growers to plant even more of the crop.

All this pushed world supply well beyond demand. The harvest this year is predicted to reach 122 million bags. Coffee beans for export were trading yesterday at 61.5 cents a pound, half the price from the 1960s to 1989, when quotas were in force.

The price plummet, combined with fierce competition that developed among roasters in the 1990s, has kept supermarket prices historically low. But a huge increase in the popularity of specialty coffees, like the blends offered by Starbucks, has proved that some consumers are willing to pay top dollar.

And that may by the only glimmer of hope out there for long-suffering coffee farmers.

Even players within the coffee industry disagree on the best way out of the crisis, but everyone believes it is not a cyclical downturn that will repair itself. Many observers voice concern that a continuing drain will destabilize vast regions of the world, further fueling illegal immigration and conversion to cocaine production.

Some support the return of the quota system, which collapsed in 1989 when the United States -- which accounts for 25 percent of consumption -- pulled out. (The United States had supported quotas as a way to keep communism from sweeping Latin America; with the fall of the Soviet Union, Washington lost interest.)

Advocates for the poor worldwide have their own solution. They are pressing the sale of "Fair Trade" coffee, which attempts to cut the corporate world out of the equation and pays farmers $1.26 a pound.

Popular in churches and on college campuses, the Fair Trade movement has captured a tiny percentage of the market. In New Jersey, the First Reformed Church in Secaucus is one place that is selling Fair Market coffee by the pound and serving only that brand at church functions.

The Rev. Will Henkel said the notion of paying a fair price was reinforced for him when he traveled to Matagalpa last year. He saw unemployed coffee workers squatting in city parks or building plastic shacks on hillsides vulnerable to mudslides.

"It's a justice issue," he said. "It's totally unfair that between the picker and the person lifting that cup of coffee that someone is making such large amounts of money and the people down there don't get a fair price. It's unconscionable."

Henkel conceded that the 25 pounds of coffee his congregation sells a month won't solve the crisis.

Some say a better solution is to work with market realities -- educating farmers in Central America to boost quality and grab a piece of the rapidly growing gourmet market.

Warren Armstrong, a former Peace Corps volunteer whose sympathies brought him to Central America more than a dozen years ago, has been working with 350 small farmers for about a year.

"Brazil is light-years ahead of Nicaragua when it comes to the technical aspects of growing," he said. "But what they don't have is the rugged terrain necessary to grow the highest grade of shade coffee."

Armstrong, who works for a nonprofit group, has been providing technical assistance to farmers and also has visited major buyers in the United States to make his pitch. He is hoping this groundwork will lead to higher prices in coming years.

Many of the farmers working with Armstrong do business with Beneficio La Esperanza, a processing plant that prepares quality coffee for export in Matagalpa and recently won a breakthrough order of 96 cents a pound with a U.S. roaster.

But the plant is a much smaller operation than the major companies that line the road from Matagalpa to Managua, the Nicaraguan capital some 60 miles south. Last year, it exported just 38 shipping containers of coffee.

"I'm really not sure that specialty coffee is the solution for the average grower," said Carlos Mejia, one of three brothers who own the plant. "A lot of the major roasters are tempted by the cheaper quality coffees, which come at a much cheaper price. The only real solution will be a worldwide effort to set prices at a sustainable level."

The relatively high price Benificio La Esperanza won was brokered by the New Jersey office of an international concern called Holland Coffee. Holland chief executive George Willekes, who works in Sparta, agreed that the real solution is for the United States to re- enter the International Coffee Organization, which oversaw the former quotas. The State Department is currently analyzing that request, which is supported by the Specialty Coffee Association of America, an industry group including Starbucks and other chains.

"We must make the public more aware of the plight of millions of coffee farmers," Willekes said. "There are an estimated 25 million coffee farmers in the world, and none of them are producing at a profit. That is remarkable and sad."

In the fields of Matagalpa, coffee workers seemed remarkably understanding about their bottom- rung role in the worldwide coffee business.

Carlos Maradiaga Zelaya, 73, is a migrant worker who picks coffee for four months and then moves on to other crops. He expressed surprise that a pound of quality coffee can fetch $6 to $12 a pound in the United States.

"That's business," he said, smiling through rotten teeth. "There is a lot of expense getting it from here to there."

Willekes said that kind of attitude is typical of small coffee farmers all over the world.

"We are not giving these people a chance to be self-sustainable," he said. "So in the long run, they must be propped up with international loans, and who pays for that? The U.S. taxpayer will pay one way or another. Why not pay a fair price for a bag of coffee? These people don't want a handout. They want fair trade."

This story has been posted in the following forums: : Headlines; COS - Nicaragua; Agriculture; Coffee