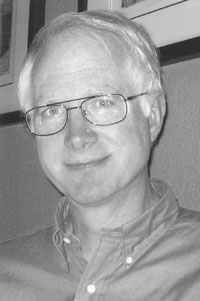 The Community Chest of Port Washington is proud to recognize Joe Blanchard as "Citizen of the Year" for 2004, the highest honor bestowed by the local charity. The Port Washington community is invited to the awards ceremony on Wednesday, February 2 at 8 p.m., held at the Port Washington Public Library.

The Chest established the prestigious Citizen of the Year Award, more than 36 years ago, to honor the rendering of outstanding service in the fields of health, education and welfare in the Port Washington community.

Joe Blanchard, who passed away in October, has long been an active volunteer in our community. When he joined the Community Chest of Port Washington, his involvement with the Chest expanded from door knocking solicitation to becoming the President of the Chest 1983. Before coming up with the ingenious solution of using red tape to fill in the Red Feather chart, he used to walk around town with a can of red paint to fill in the progress of fundraising.

He also volunteered for Residents for a More Beautiful Port Washington, Landmark on Main Street, American Red Cross, Harvard College admissions interviews, Harvard College Fund Phone-a-thon. He even found the time to help with the Thanksgiving Day Run, Harbor Fest, beach and park clean-ups - wherever and whenever he was needed.

"Joe possessed a tireless passion for being there and helping people for a good cause, and his contributions to the Port Washington community exemplified the Chest's mission of the people of Port helping the people of Port," said Community Chest President Craig Michaels.

Throughout his banking career, which transitioned from Chase to other Investment Management firms, to the most recent Bank of New York, Joe always maintained his enthusiasm to help the community he lived in.

He got started in banking in December 1971, joining the Global Credit Training program at Chase Manhattan Bank. Thanks to his strong performance, he was chosen to go to Chase Tokyo branch (Japan) to teach Credit Courses, and thereafter was promoted and transferred to the Far East Regional Office by October 1973.

Joe met Akiko Hasegawa, who was an International Remittance clerk at Chase, Tokyo, in 1973. He became Manager of Asia Training Center of Chase Manhattan, Hong Kong in 1974.

After much effort to get approval from Akiko's parents, Joe and Akiko had a wedding in the Japanese style in Tokyo on March 15, 1975, with guests including parents from both sides. Joe and Akiko lived in Hong Kong for about a year until the Chase Head Office assigned him as Manager of Country Risk back in the New York office, to analyze and report to the Country Risk Committee. David Rockefeller and Henry Kissinger were among the monthly meeting panel.

And Akiko moved from NYC's Waterside Plaza to Port Washington in 1977, prior to their first baby's arrival. They enjoyed settling down in Port, and raised all three children - Sara, Christopher, Andrew - in the same home.

He is a graduate of Harvard College, where he majored in International Relations. After college, he joined U.S. Peace Corps. From June 1967 to November 1968, he ran an experimental farm in Peru, dealing with fertilizer experiments, seed programs, chicken-raising program, health programs etc. Then, Joe served the U.S. Army from February 1969 to February 1971, as the Assistant Security Sergeant on a NATO missile base in northern Germany, having 20 people under him.

Joe also attended New York University College of Business and Public Administration and in Feb. 1979 received certificate for the Professional Program in Business in the field of International Business.

Joseph Procter Blanchard was born to John Adams Blanchard, a Senior V.P. banker, and Mary W. Procter, a remedial reading teacher, in Boston on March 30, 1945 and was raised in Dedham, MA.

This story has been posted in the following forums: : Headlines; COS - Peru; Awards