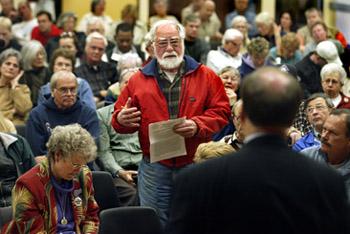 That was the overwhelming sentiment among local residents, young and old, who turned out Thursday for a town hall discussion of President Bush's proposal to privatize Social Security.

The spirited talk was decidedly partisan. A number of speakers characterized the privatization proposal as a conservative campaign to roll back the nation's social programs.

Bush's plan calls for allowing young workers to invest a portion of their Social Security taxes into private accounts.

"I think the economy is in trouble and Social Security is a distraction," said Bernie Angel, 77, of Carmel.

Another man said that if everybody knew how to invest for themselves, there would be no need for town hall meetings -- everybody would be retired.

Thursday's meeting was one of four Farr is conducting in the area over the next several days, including one at the Salinas Firehouse Building last night. Other members of Congress are also holding these talks, he said.

Farr said the president's proposal to allow future retirees to divert a portion of their Social Security taxes into private accounts has sparked a healthy conversation about America's inability to save.

But Farr added, "We don't have to destroy Social Security to have this debate."

He said the president's idea to put future retirees' fortunes in the hands of companies as unpredictable as Enron is "absolutely nuts." Social Security is supposed to be a safety net, not a gamble, Farr said.

What's more, Farr said, while Social Security needs some adjusting, it certainly isn't in a crisis stage as some in the Republican party have characterized.

Many in the audience nodded in agreement.

It has been predicted that as it stands now, the Social Security system by 2042 will be paying out more in benefits than it takes in and its trillion dollar-plus surplus will be depleted, said Farr and Roy Aragon, a lobbyist with the National Committee to Preserve Social Security and Medicare, who was also on hand.

If no action is taken to address the shortfall, the system would be able to pay retirees only about 75 percent of what they are entitled to.

Bush has acknowledged his proposal won't solve the shortfall, but he hasn't yet stated what option he favors to fix it.

One option the president has rejected is raising taxes.

Aragon said Bush's plan has too many holes. Aragon said it is unclear how the government would pay benefits to the disabled, who account for a third of the 47 million Social Security recipients.

Likewise, Farr said, the discussion should now be about how to repair the program, not about changing it fundamentally.

"We don't want to rush into something that the American people haven't bought into."

Farr agreed with residents who said the government needs to focus on more pressing needs, including rising medical costs.

"I think we should have a big die-in at the White House," Moffatt said.

After the meeting, Moffatt said she can't work because of medical problems but hasn't been able to qualify for medical benefits.

One man said the privatization talk is just an attempt to get to "the last of the low-hanging fruit.... to shift it to Wall Street."

It's a trend that troubles Neil Amos, a 20-year-old student at CSU-Monterey Bay, one of the youngest town hall attendees. Changing the Social Security system would have detrimental effects on his future, he said.

"The guaranteed benefits won't be there when I retire."

This story has been posted in the following forums: : Headlines; COS - Colombia; Politics; Congress; Social Security