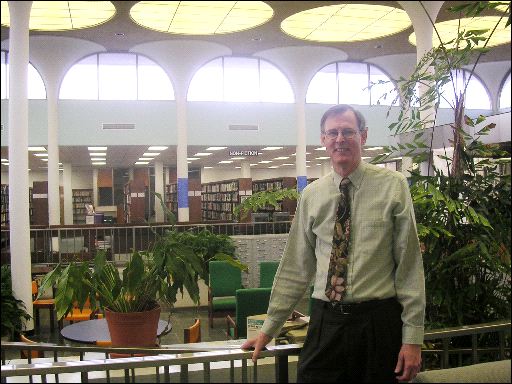 Librarian retires with plan to work in school systems

There are a lot of things that Fred Danes will miss about working at Fort Gordon's Woodworth Library, including the quirky building itself.

"It's a fun building," said Mr. Danes, who retired Jan. 31 after 35 years in government service including 18 at the library. "I love to whistle. It has good acoustics, good reverberations."

Sometimes, however, the sounds in the building can be a little spooky.

"When you are in here by yourself, the building creaks. You feel air disturbances you wouldn't expect," he said.

Born in Alaska to a father who was an electronics engineer with the Federal Aviation Administration, Mr. Danes moved around during his early years.

He applied for a job with the Department of the Interior's Bureau of Indian Affairs, wanting to teach in Alaska. Those with the bureau felt that it was too remote of an area to send a single man so they sent Mr. Danes to a Navajo Indian reservation on the border of New Mexico and Arizona.

He spent about 12 years on the reservation teaching school and eventually becoming the school's librarian.

Mr. Danes decided to move back to Washington state, but after the years under sunny skies on the reservation, the cloudy and rainy conditions of Seattle did not suit him, he said.

He looked for sunnier destinations, joined the Peace Corps and headed for the Fiji Islands.

Mr. Danes said he's enjoyed his time at Woodworth Library and would like to work in a library in one of the school systems.

His ultimate goal, he said, is to return to Fiji, where his wife, Chandra, has family.

--From the Thursday, February 10, 2005 printed edition of the Augusta Chronicle

This story has been posted in the following forums: : Headlines; COS - Fiji; Secondary Education; Libraries