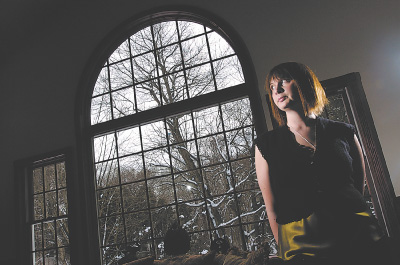 Caption: Diana Frymus, a 2004 graduate of George Washington University, is heaading off this weekend for Peace Corps assignment as a community health volunteer in Uganda
(Chris Preovolos/Staff photo)

STAMFORD -- A 22-year-old Stamford woman has joined the increasing number of Americans who are heading abroad with the Peace Corps.

Diana Frymus, who spent a semester of her junior year in college at the University of Cape Town in South Africa, will leave Sunday for Uganda. Her experience teaching AIDS and HIV prevention to Xhosa women in Langa Township, South Africa, inspired her to seek a career in international public health, Frymus said.

Studying alongside students with AIDS showed Frymus what she hopes to show others -- that AIDS is not someone else's problem.

"One in four students were infected," Frymus said.

At a protest in Cape Town, she was moved to see South Africans chanting to compel their government to supply medical treatment for people with the virus.

"I came back thinking hardly anybody (in the United States) knows what's going on," she said.

Though Frymus has traveled extensively, thanks in part to her father's service in the Air Force, she felt a pull back to Africa.

"I really fell in love with African culture and people," she said. "People are lovely there."

Frymus graduated from George Washington University last year with a bachelor's degree in biology and a minor in human services. She requested Peace Corps placement in Africa and will work with AIDS patients as a community health volunteer with the Ugandan Ministry of Health. She said she will serve two years there before pursuing a master's degree in public health.

The Peace Corps has enjoyed a surge in popularity over the past two years. The last official count, taken in September, recorded 7,733 Peace Corps volunteers in 71 countries, the most since 1974, Peace Corps spokeswoman Jennifer Borgen said. The number of applicants is also on the rise, with 11,000 Americans seeking to volunteer since the start of last year -- a 10 percent increase over the previous year.

President Bush has asked Congress to provide $345 million to the Peace Corps in fiscal year 2006 -- an increase of $28 million over the current fiscal year, according to the group's reports.

Four Stamford residents and four other Fairfield County residents now are known to be Peace Corps volunteers, Borgen said, though the numbers may not represent all volunteers originally from the area.

Recent college graduates, who represent a large portion of the volunteers, sometimes list their most recent residence rather than their parents' home address on Peace Corps applications. About 130 Connecticut residents serve in the Peace Corps.

Two members of Congress from Connecticut were Peace Corps volunteers. U.S. Sen. Christopher Dodd, a Democrat, served in the Dominican Republic from 1966 to 1968. U.S. Rep. Christopher Shays, R-Bridgeport, served in Fiji from 1968 to 1970.

Those who know Frymus well were not surprised by her interest in the Peace Corps. Candice Elwell, Frymus' roommate at the University of Cape Town traveled from her hometown of Chicago to attend her friend's going-away party last weekend in North Stamford.

"She's one of the most compassionate people I've ever met," said Elwell, 23. "AIDS awareness is something she takes to heart."

Ryan Fitzgerald, a fellow George Washington student and friend, said, "She fits in everywhere. She doesn't try to conform to everyone, but she's very realistic about what she can do in the world."

So far, Frymus has done a lot. Influenced by her father, who is chief cardiologist at Danbury Hospital's recently formed cardiothoracic surgery unit, Frymus considered a career in medicine but her interest turned toward public health.

She taught AIDS prevention as a volunteer in Washington, D.C. Traveling through rural South Africa and Mozambique during her junior year spurred her interest in AIDS prevention.

In her senior year at George Washington, she took classes to support her career goals and did research in HIV medications. She organized a symposium at the school with speakers from the National Institutes of Health, school professors who worked in public health on HIV and AIDS and the president of the Global AIDS Alliance.

"With today's global community, things that affect other people in other countries will affect us here," Frymus said. "We're no longer in our own little world."

The Peace Corps was founded in 1961 by President Kennedy to help interested countries meet their need for trained people and promote understanding between Americans and the people served by the Corps. All told, about 178,000 U.S. citizens have served in 138 countries, in education, health, the environment, business development, agriculture and other areas.

This story has been posted in the following forums: : Headlines; COS - Uganda; AIDS Education