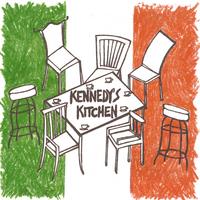 "joHn Kennedy writes and sings the best storytelling songs that I've heard since Harry Chapin",
Fan overhead at break during a recent show at the Box Factory for The Arts in Saint Jospeph, Michigan

www.kennedyskitchen.com for additional information, photos, listening to and purchasing music.

joHn Kennedy is a storyteller who sings, and a singer who tells stories. Every evening with his music is a new creation: sometimes hilarious, often deeply moving. Singing with a unique rich voice, his songs honor the past, give meaning to the work that we do, and hope for the future. At his solo shows you'll hear: The Great Kankakee, a song about what was once one of the continents great rivers, America's greatest wetland, a place within an hours drive of South Bend, Indiana, joHn's home; Patrick Coyle, the saga of joHn's Donegal Ireland born grandfather. You'll sing-along to I Want to Ride on a Sailing Ship, a children's song from joHn's first solo CD, a 1996 release chosen by WVPE's backporch as one of the top ten folk releases of that year.

joHn is a songwriter, award-winning multi-instrumentalist, singer, producer, promoter, and the leader Kennedy's Kitchen, a South Bend based group dedicated to playing Irish music. He helped to form and lead the traditional Irish band Seamaisin in 1990 and co-produced two recordings with that group (Joseph Harvey's Fiddle was Left in the Rain,and Seamaisin: Live at The Tin Shop). Seamaisin also produced and scored music for the sound track of the short-film, Araby, an adaptation of James Joyce's short story of the same name. Araby was nominated for an Academy Award in the Student Narrative Film category.

joHn is the 2004 All-Ireland Fleadh Silver Medalist in Accompaniment, competing on guitar. He is also took first place in the 2004 Midwest Fleadh in Ballad Singing, in English. joHn is the 2003 Midwest Fleadh Gold Medalist in Accompaniment. He has appeared on stage with the great concertian player John Williams and Mick Maloney. With Kennedy's Kitchen he opened for SOLAS, The Celtic Fiddle Festival, and Natalie McMaster. Together with the Kitchen he appeared on stage with the Chieftains for the encore at the 2005 concert at the University of Notre Dame.

Kennedy's Kitchen's debut CD, which joHn produced and mixed, was chosen by WVPE FM 88.1 as one of the top 25 folk releases of 2003. joHn's solo CD I'll Learn To Fly, was chosen by WVPE FM 88.1's The Back Porch program as one of the top ten folk releases of 1998. Other recording credits include: St. Patrick's Day at Notre Dame,recorded live with David James, Dan Gellert, Kevin and Maggie Henry, Pat Max, and Rosie McCormick; The Notre Dame Experience,with Nolan, Auturmn, and Tim O'Neil on the opening cut of this Pianobrothers production; and Extra Stout, Live at The Inn at Long Trail a recording that joHn engineered and produced with Pat Max.

joHn (with help from Joel Cooper) is working on his second solo CD, All My Life. (See sound samples below)

"His voice is absolutely phenomenal" Helen Norris, Senior Life, October 2001.
"joHn Kennedy puts his whole heart into it." Andy Hughes, South Bend Tribune, March 16, 1996
"The best storytelling songs that I've heard since Harry Chapin", A fan, overheard in the lavatory at a show at Box Factory for The Arts.

This story has been posted in the following forums: : Headlines; COS - Chile; Music; Ireland