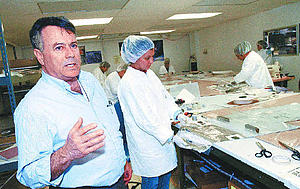 A&R in Fontana manufactures fabric products for space ships, buildings and trucks. A&R customers include the Navy, NASA and Toyota.

The manufacturer employs 32 workers and is the parent company of AR Tech.

Weisbart met Motonobu Nohmura, a family member of the owner in 1998 through the Industrial Fabrics Association International, a nonprofit trade association headquartered in Roseville, Minn. The two kept up a friendship over the years.

Weisbart and Nohmura discussed A&R providing shelters for use in Japan.

"We built and sent them the prototype in November and we will go to Japan to make a presentation Feb. 28," Weisbart said Feb. 17. "No deal has been made yet. The goal of the trip is to get something" such as an agreement or commitment, he said.

If a deal is made, A&R Taurpalins would manufacture the air awning, fabric emergency shelters and export them to Japan. Taiyo Kogyo would distribute the shelters.

A&R generated $2.5 million in revenue in 2004. The manufacturer expects revenues will increase this year by $300,000 "if the deal with Japan goes through," Weisbart said.

Not those blue tarps!

A&R manufactures tarps but not the ubiquitous blue ones familiar to Californians.

"We don't make those blue tarps. I don't even like them," Weisbart said. "We sell heavy duty 18-ounce tarps for trucks."

The tarps weigh 18-ounces per square yard, are five-feet wide, heat treated for water proofing and are twice the thickness of those ubiquitous blue tarps, Weisbart said. A&R tarps are used to cover truck beds and loads.

Weisbart bought a $50,000 laser-guided cutting and mapping machine in November to help A&R keep up with demand for products. The machine maps Mylar patterns and files them in a computer. It can cut fabric into any shape the designer wants.

A&R Tarpaulins was founded by Aundra Arrington and Bud's father, Ralph Weisbart in 1976. A&R was originally headquartered in Boyle Heights but in 1988, Arrington bought a building in Fontana.

"We decided to fully move to Fontana in 1992. We needed to consolidate because we were not coordinating well," Weisbart said.

Weisbart, 64, bought a third of the company in 1978 after 17 years as a social services administrator for Ventura and Los Angeles counties. Weisbart's wife, Carmen, joined A&R in 1989. She is president of the company.

Weisbart realized that the social service work he wanted to do would be difficult to accomplish as a public servant because funds were not available at the time. So he turned to business.

"My passion was developing programs based on needs to address issues among youth. Now we do the same conceptual thing in designing products and services in companies," Weisbart said.

"Over the years, my father and I disagreed on what direction the company should take," Weisbart said. "I thought we should expand our business into the aerospace industry and he didn't."

Weisbart bought his father's share of A&R in 1990. A&R landed contracts with Lockheed Martin and Boeing.

Weisbart wants to keep his company small because the challenge of handling a high-revenue company would not be in his best interest.

This story has been posted in the following forums: : Headlines; COS - Peru; Business