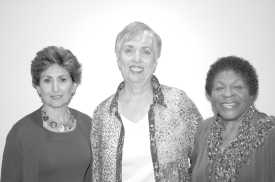 Three of Immokalee's "guardian angels" were recognized recently at the Celebrating Women of Achievement Benefit on March 8. The women were singled out for their service to the community they love by the American Association of University Women, Greater Naples Branch. Their names are all familiar to Immokalee residents: Barbara Mainster, Florence Jelks-Robinson and Carol Shaw.

Barbara's love of education has taken her from Michigan State University, to the Peace Corps in Arequipa, Peru; from Coordinator of the Community College Early Childhood Program in Binghamton NY, to the Executive Director of RCMA in Immokalee, FL, where she's spent the last thirty-two years.

Barbara's success, she believes, is in large part a result of her parents - their unconditional love, and the belief that she could do anything she set her mind to. Two of her most notable accomplishments include: setting up a birth control project in Peru while in the Peace Corps and helping to develop RCMA from three child centers in one county serving one hundred kids, to over seventy centers and programs in twenty counties serving over 6,000 kids. Barbara's greatest inspiration comes from the very people RCMA serves - migrant parents who, even without legal status, work so hard believing they can create a better future for their own children against tremendous odds. Barbara, whose late husband was the love of her life, has four children (three of whom were adopted), eleven grandchildren, and two great grandchildren. She points out that this is what happens when you adopt older kids!

This story has been posted in the following forums: : Headlines; COS - Peru; Awards