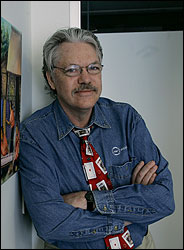 
Associated Press
Allen Andersson, with his daughter Rachel in Barcelona, Spain, for a family vacation this week, said he always expected that Symlin would receive FDA approval. Rachel, 20, has taken the drug used to treat diabetes for three years.
Having a child with diabetes means living with a gnawing fear of a thump in the middle of the night – the sound of your child falling out of bed, struck by a hypoglycemia attack from dangerously low blood sugar.

Allen Andersson described that sound in a letter last year to federal regulators, and detailed the horror of rushing to the side of his unconscious but howling daughter.

He described plunging a syringe into her torso to inject a hormone that raises blood sugar, then smearing her cheeks with cake icing in the hope of reviving her.

Andersson, 60, wrote as both the father of a diabetic daughter and the utterly convinced investor who poured millions of dollars into research for a drug he hoped would help her.

Last Wednesday, the Food and Drug Administration approved that drug, Symlin, for use by diabetics on insulin therapy.

Amylin Pharmaceuticals, the San Diego company that makes the drug, credits Andersson with keeping Symlin alive for the six years it needed to obtain FDA approval.

In 1999, the company had been on the brink of collapse after Johnson & Johnson withdrew its financial support.

The FDA rejected the results of two clinical trials of Symlin. Wall Street clobbered the company and its shares tanked.

But Andersson invested $18 million in the company that year and almost singlehandedly kept Amylin afloat.

To celebrate Symlin's approval, the Andersson family raised glasses of milk to toast Symlin. That day, Andersson's 9.2 million shares of Amylin were worth more than $200 million.

When Andersson first said he wanted to invest in Aymlin, the company's then-CEO Joe Cook warned him "this could be the dumbest investment of your life."

Last week, a giddy Cook said, "This is a story about personal values, perseverance and essentially being faithful to what you believe, sticking to your guns and trying to drive it forward."

Andersson grew up the son of a carpenter in Hyannisport, Mass. As a boy, he got a paper route and saved every cent he could. By the time he was 16, he had saved enough to make a down payment on a drive-in ice cream parlor. He and his four younger siblings put themselves through college on their earnings from running the drive-in.

Before Allen Andersson's major investment in Amylin Pharmaceuticals in early 1999, the San Diego company's prospects were at a low:

Lowest share price: 31 cents. Nasdaq was threatening to delist its stock.
Lowest market capitalization: $18 million
Johnson & Johnson had pulled out as Amylin's development partner in its diabetes drug Symlin.
Work force was down to 31 employees.

Amylin's current profile:
Share price: $19.40 (at yesterday's close)
Market capitalization: $2.03 billion
Its first drug, Symlin, has been approved by the Food and Drug Administration.
FDA to decide by April 30 on approval of the company's second diabetes drug, exenatide.
A work force of more than 600 employees, with plans to hire more than 300 for the launch of exenatide

Though he claims he was not a good student, Andersson attended Phillips Academy in Andover, Mass., on a scholarship. He then worked his way through the Massachusetts Institute of Technology, where he said he "studied math erratically."

He also spent two years in Honduras during the 1960s as a Peace Corps volunteer.

He and his wife, Susan Riecken, settled in Bethesda, Md., where they bought a three-bedroom house. Andersson set out as a computer software entrepreneur, experiencing several failures before finally having a wild success.

When their daughter Rachel was 4, she was diagnosed with juvenile, or Type I, diabetes.

No insulin
In people with the disease, beta cells in the pancreas do not produce insulin, which allows sugar in food to be absorbed by the body's cells. That failure to absorb the sugar can ultimately damage all organs.

Everyone's diabetes is different, fluctuating by day and by hour, depending on diet and activity. But patients learn to know their bodies and signals of the disease.

Symlin, which is injected and is used with insulin, helps control the fluctuations in blood sugar, especially after meals. The drug is a form of amylin, a hormone that is also produced by the pancreas, said Dr. Steve Edelman, a professor at the University of California San Diego and a founder of Taking Charge of Your Diabetes.

Edelman has been taking Symlin for three years and has run clinical trials on it.

Edelman said Symlin is the first major advance in diabetes treatment since the development of insulin in 1921. "And people still struggle to use that correctly," he said.

In the mid-1990s, Andersson learned about studies involving the Symlin compound. The drug made sense to him because it is a replacement for a missing hormone, just as insulin is.

In late 1998, when he heard Amylin was conducting clinical trials of Symlin, Andersson called the company and asked if his daughter could be enrolled.

She was too young, but he kept watching Amylin.

Shares fell
In early 1999, Andersson obtained the results of two Phase 3 clinical trials in which people who were on insulin therapy used Symlin.

The FDA said the results were "statistically insignificant," meaning that the results could not conclusively prove that the drug's success was not due to chance.

Securities analysts, who had been predicting a positive outcome, were "just irrational, and they slammed the company," recalled Ted Greene, a physicist who formed the company with Garth Cooper, the Oxford scientist who discovered Symlin.

Andersson looked at the same statistics with the eyes of a mathematician and concerned father.

"Anyone with an understanding of diabetes or statistics could see this was a good drug that did the job and was safe and effective," he said.

Several doctors, scientists and medical statisticians also looked at the trial data and urged Amylin not to give up. But the company was dangerously low on funds, after Johnson & Johnson withdrew its support.

"I was thinking that I really wanted to invest in the company," Andersson said. "But I also thought it would be better to buy from the company itself, so that my money could go directly into additional research and help keep the company and my money alive, instead of buying it on the open market where it would go to some undeserving capitalist."

He called Amylin and said he was interested in making a direct investment.

The people at Amylin did not know Andersson. Nor did they know he'd recently made some money and wanted to invest a seven-figure sum.

Andersson's computer software company LightSpeed International had developed programming that allows long-distance calls to be made over the Internet. The company was sold in 1998 to Cisco Systems, earning Andersson $10 million in Cisco shares.

"After a lifetime of entrepreneurial struggle, and mostly failure, I finally got lucky late in life," Andersson said.

Met in restaurant
He and Cook, the then-CEO, met over dinner in an Italian restaurant in Bethesda, Md.

"Joe is a button-downed (former) Eli Lilly executive and Allen is a Bill Gates type, always running around in sandals. One is a Republican and the other is a Democrat. But they're both smart and got a huge amount of integrity."

Their dinner lasted four hours. Cook filled the white paper tablecloth with doodles and figures about Symlin and the company.

Andersson talked about the plan he and his wife had to invest their fortune building libraries in remote villages of Central America, where the indigenous people had never made a telephone call or traveled more than 10 miles from home.

Cook shared that he and his wife were investing most of their fortune creating literacy and social programs in Appalachia, Andersson recalled.

"Neither of us is going to leave wealthy heirs," Andersson said. "I became an eager investor."

At first, he planned to invest $1 million, because it was all he thought he could afford. But then his Cisco stock began to soar.

His investment allowed Cook to attract an additional $9.5 million, about $6 million from Domain Associates and several million from himself, Greene, Tim Wollaeger and then-board member Donald Rumsfeld, now the secretary of defense.

In October 1999, Andersson was the lead investor in another round of financing, investing $12 million of the $18.5 million raised with shares selling for $5. Between the two deals, Andersson had purchased 7.6 million shares.

$16 million
In February 2000, Andersson invested $16 million more to buy 1.3 million shares at $12. He was the company's biggest shareholder; at his peak, when he was borrowing against his shares to buy more, he held about 11 million shares.

Yesterday, Andersson and his daughter Rachel, now 20 and on Symlin for three years, met in Barcelona, Spain, for a family vacation.

Rachel is studying fashion design in Europe and is "beautiful, intelligent and healthy and taking Symlin every day," her father said.

Amylin expects to hear by April 30 whether the FDA will approve the company's second diabetes drug, exenatide. And Phase 2 trials in which people, without diabetes, used Symlin to lose weight show promise.

Andersson, too, has moved on to other projects.

He and his wife founded the Riecken Foundation, named after her parents, which has built more than 20 libraries in Honduras and Guatemala.

He used a portion of his Amylin gains to found Paperboy Ventures, his merchant bank, which identifies pathbreaking scientific discoveries and works to commercialize them.

"We are not a condescending, dart-throwing venture capital firm," Andersson said. "We have the paperboy's working-class values. . . . We don't bet on entrepreneurs; we are entrepreneurs."

Andersson plans to pour the profits from most of these ventures into his philanthropic projects in Central America. He and his wife still live in their three-bedroom home in Bethesda.

Although thrilled about Symlin's approval, Andersson said he expected it would happen, eventually. He recalled what he said to the staff almost two years ago, when he was asked to speak at Cook's retirement.

"You know how I feel about my daughter and how I feel what all of you have done for her," he recalled saying. "Multiply that somehow by a million, and this is what we have done and what our work will do."
Terri Somers: (619) 293-2028; terri.somers@uniontrib.com

This story has been posted in the following forums: : Headlines; COS - Honduras; Business; Pharmaceuticals; Diabetes