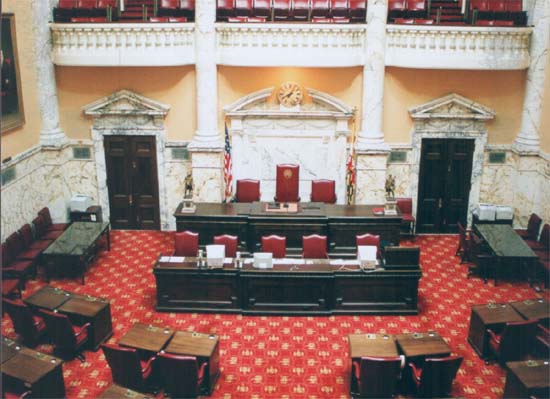 Nearly one-third of Maryland Senators and Delegates who participated in a voluntary test have shown elevated levels of mercury in their bodies. All 22 of the participants had at least some amount of the potentially harmful neurotoxin in their system, while seven -- including four women legislators -- had levels that the U.S. Evironmental Protection Agency declares unsafe for women of childbearing age.

"These results, taken from some of our highest political leaders, show just how dangerous and widespread the mercury threat has become in our state," said Mike Tidwell of the Chesapeake Climate Action Network, a co-sponsor of the test. "Until we scrub mercury from our dirtiest power plants -- using available, cost- effective technology -- we'll surely see more children, more pregnant women, and even more of our lawmakers put at risk."

In early March, 22 lawmakers surrendered five grams of their hair that was then tested by the Environmental Quality Institute at the University of North Carolina Asheville ( http://www.unca.edu/eqi/ ). Seven of the legislators had at least one microgram of mercury per gram of hair sampled. The US EPA considers this level dangerous for women of child-bearing age (16 to 49 years old).

Mercury is a toxic heavy metal, which, when ingested, can cause serious neurological damage, particularly to developing fetuses, infants, and children. Across America, one in six women of child- bearing age now have unsafe levels of mercury, according to the US EPA.

Coal-fired power plants are responsible for 41 percent of the total mercury emitted by all known U.S. sources. In Maryland, the state has issued fish consumption advisories for ALL of its rivers and lakes due to mercury contamination.

But the Maryland Four Pollutant Bill, HB 1169/SB 744, would reduce by 90 percent the mercury from the state's seven dirtiest plants. This would provide the state with millions of dollars in health treatment savings and incalculable benefits to otherwise injured children.

"This test of Maryland lawmakers mirrors results now found across this region and this country," said Brad Heavner of the Maryland Public Research Interest Group. "But with the federal government refusing to act on this tragedy, our state lawmakers should act promptly to protect themselves and the rest of Maryland from mercury by passing the Four Pollutant Bill. We know the problem and we know the solution. Pass the bill."

The test of Maryland lawmakers was voluntary and anonymous. Though not scientific in scope, the test broadly reflects mercury prevalence across the country ( http://www.nrcm.org/merc2/hairsample_pr.htm ).

This story has been posted in the following forums: : Headlines; COS - Congo Kinsasha; Global Warming; Environment; Humor