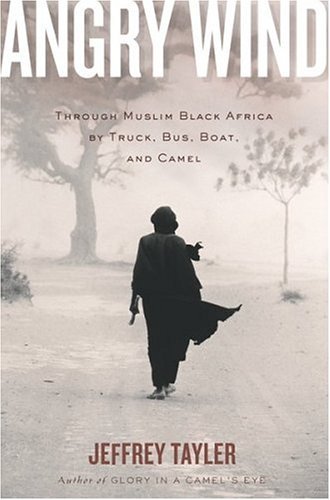 Special to The Seattle Times

Just before the U.S. invasion of Iraq in the spring of 2003, Jeffrey Tayler spent several months traveling through some of the most remote and forbidding territory on Earth, from Chad west through Nigeria, Niger, Mali and Senegal.

The terrorist attacks of Sept. 11, 2001, had intensified the author's already strong desire to explore this swath of Muslim black Africa, where he briefly visited in 1997. Osama bin Laden had encamped just east of Chad, in Sudan, for several years in the 1990s.

Tayler's 4,000-mile journey took him along a band of semi-desert land south of the Sahara called the Sahel. A broad diversity of people share this barren landscape and the dry easterly windstorms called the harmattan, which can blow for days over Central and West Africa.

For Tayler, the harmattan is like a dusty lens, revealing the severe natural conditions of the terrain and, more metaphorically, the human misery he encounters. Fluency in Arabic and French gives him unique access for a white foreigner. He has also read the Koran, giving him further insight into the cultures and politics of the region. The Muslim influence in West Africa dates back 1,200 years.

The people of the Sahel feel a sense of belonging to their tribes — the Tuareg, Hausa, Zarma and Songhai — and not to the nation-states created by 20th-century colonial powers. Historic ethnic tensions and subregional conflicts simmer constantly.

Tayler himself openly questions Bush administration policies and war plans, but most of the criticism of the U.S. he hears is unsolicited. Although he faces skepticism and hostility as an American, many of the people he interviews treat him with respect and decency, reserving their outrage for President Bush. As one of Tayler's Nigerian guides puts it: "We separate Bush from the American people. Evil comes from Bush, not from the American people, who are honest." Anti-Americanism is not new to this region, but "Bush (and Blair) angered Muslims in a newly and uniquely personal way," Tayler writes, "and evoked a disgust whose likes I had never before seen in twenty-one years of overseas travel."

However, "Angry Wind" is far from a political diatribe. Lush accounts of traveling to storied destinations are at the heart of the narrative. He describes Faya Largeau, in northern Chad, as the "largest oasis town on earth." Tayler rides by camel to witness exultant dance rituals by Tuareg nomads in the sands of the Sahara. He takes an eventful boat trip down the Niger River to Timbuktu.

Hardship is the norm in much of the Sahel. The villages he visits in Niger seem the most distant from modernity. Slavery still exists in remote areas of the country. He visits a town where men take their fill of the limited food supply while women and children go hungry. So foreign and reviled is the concept of state or national government that taxes are collected in raids.

Tayler the writer sometimes overreaches with his diction, waxing rhapsodic about the "crepuscular luminosity" of a Malian village and the "voluptuous mounds" of desert sands, but he rises to the occasion in the urban scenes. Of Bamako, Mali, he writes, "The chants of the mendicants, the hyena-honks of taxis, the grunts of the women, and the oaths shouted by angry drivers all compose a cacophony of urban distress as grievous as it is vain. Vain because beyond the Sahel the voices of these people cannot be heard, their stories will never be told. They are born to live poor and die hard, leaving nothing behind; their misery, once the subject of ideologies of liberation and revolt, inspires no one."

Tayler's grim conclusion about Bamako and the region — that conditions will worsen and animosities increase — illustrates his larger point that in a time of global destabilization and the rise of fanatic fundamentalist religion, we ignore the fate of these people at our own peril.

David Takami is the author of "Divided Destiny: A History of Japanese Americans in Seattle."

This story has been posted in the following forums: : Headlines; COS - Morocco; Writing - Morocco