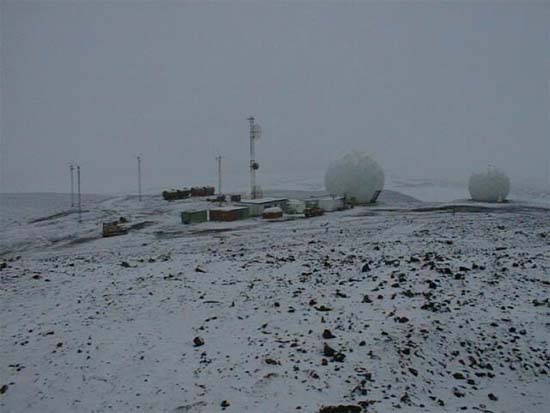 PEG out to peg more business for ATSC

Caption: In striking contrast to Ross Island's ice, Black Island (above) receives very little precipitation and has a climate more akin to a cold desert. Needless to say, the ATSC engineers and technicians going to Antarctica must be prepared

This is not the first overseas project that Culin and Pickens have worked together on. "Kevin spent six months in Canberra, Australia as part of a team of 20 engineers who installed the GRO Remote Terminal Station (GRTS) in 1993. When NASA came to us to install another TDRS Ground Station at McMurdo, Kevin was my choice to lead the project due to the strong team leadership qualities he displayed on GRTS."

The McMurdo Project is only one of over ten multi-million dollar Ground Station related projects that the Project Engineering Group is now managing. "We have grown from 5 projects and 20 engineers to 13 projects and over 40 engineers since Jim Conrad set up the Project Engineering Group in 1994," Pickens added. "And we are presently pursuing opportunities with NASA and other customers to build additional Ground Stations which, if we win, will more than double our group's business by the end of 1995."

Perfection is our goal. Excellence will be tolerated.

The 1996 vision for ATSC's Project Engineering Group (PEG) is: Perfection is our Goal. Excellence will be tolerated."

The PEG demonstrated this excellence when they completed the McMurdo ground station, a project to install a satellite ground station in Antarctica for direct communications between the base at McMurdo, Antarctica and the White Sands Test Facility, Las Cruces, NM.

Antarctica provided great challenges to the McMurdo crew for many reasons, including the extreme cold, the isolation, and the lack of communications.

"It is fascinating to realize you are in a place where fewer than 50,000 people have been," said Kevin Culin, ATSC project manager. "It is amazing to see mountains, ridges, and canyons turn into flat terrain. We were sitting on two miles of ice."

Kim Stanley Robinson, a science fiction writer, spent time in Antarctica with the ATSC McMurdo project engineers while he was gathering information for a new book. Robinson says of Antarctica, "It is a very striking, bizarre sensation, to land on this ice sea, and to have the mountains you go over just covered with a huge cake of ice and snow, so smooth the rocks barely stick out of it."

The McMurdo team, led by Culin, worked under strident deadlines. For example, the team had one year between presenting the preliminary design review of the ground station, and the internal review of all equipment before it was shipped to the customer.

The team battled the isolation associated with working at the South Pole through communication via the internet. Daily project information was relayed back to ATSC, as well as minor problems the group needed assistance handling.

The team was recognized for their work by their customer, Frank Stocklin, NASA project manager. Stocklin wrote in a letter to ATSC, {"my admiration and respect for a job very well done. I look forward to working the next challenge with you."

The project has been nominated for the Goddard Space Flight Group Achievement Award. The winners will be notified in the next 3-4 months.

"As a result of the excellent work performed on McMurdo, ATSC was awarded a contract to design electronics and communications systems for the National Science Foundation at the Amundsen/Scott South Pole Station," said Pickens. "The contract has a value of $5 million over the next five years."

PEG achieved "perfection in many ways. They increased business by 50 percent in 1995, and they grew from 40 to 60 employees in the past year.

PEG's completion of the McMurdo ground station, coupled with their future outlook, ensures they will meet their 1996 vision of "Perfection."


GRTS
The TDRS Ground Terminal in Canberra, Australia that closed the ZOE - the zone of exclusion.


Guam GRGT - 1 - 2
Building on the success of GRTS, another TDRS ground station in Guam.


At the end of the day - you bet on people.
Strategy is easy - Execution is hard work.


What we look for
...in an enginner