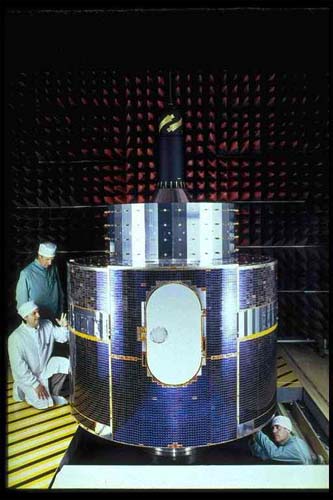 Hundreds of miles from Florida, an infant hurricane is forming off the west coast of Africa. Farther still, a satellite high above Earth starts snapping baby pictures.

It's part of the GOES system -- Geostationary Operational Environmental Satellite -- that uses radar, infrared imaging and other tools to track the world's weather.

"It's a watchdog," said Jerry Jarrell, acting director of the National Hurricane Center in Miami. "GOES is the primary means that we have to detect something that might be forming. Because of the GOES satellites, we should never have a hurricane or tropical storm develop without us knowing about it."

That wasn't always the case. The first GOES were sent into orbit in the 1980s, but spacecraft problems often hindered their performance, and launch delays kept replacement GOES on the ground. To do a complete job, two spacecraft need to be operating at the same time. One focuses on the Atlantic Ocean and the eastern portions of North America while the second monitors the Pacific Ocean and western parts of the continent. But there were times in the past decade when the National Oceanic and Atmospheric Administration, which oversees the GOES system, had to rely on a single spacecraft.

In 1992, AlliedSignal Technical Services designed and installed an upgrade to the NOAA Ground Station at Wallops, VA to provide the station with the capability to control and receive telemetry from a German Meteosat weather satellite which was moved to a position over the Atlantic Ocean to provide weather coverage of the Eastern United States in the event of GOES satellite failure.

Today, however, NOAA has three GOES in orbit -- two working craft and a third that is undergoing tests so it can replace a predecessor that breaks down or runs out of fuel. The trio of weather-watchers represents an unprecedented level of security. Otherwise, if one GOES broke down, it could take anywhere from a year to 1 1/2 years to get replacement spacecraft into orbit, said Gerald Dittberner, GOES program manager for NOAA. That's because rocket companies that launch the spacecraft are booked that far in advance.

"With the backup GOES already in space, it can start taking data within two days of turning it on, so we're looking at a two-day break instead of a 12- to 18-month break."

The third GOES, launched in April 1997, had some solar array difficulties when it first slid into orbit. However, NOAA officials say the problem has been fixed and the satellite will be ready to work when needed.

"Everything else on the satellite is working fine, and we expect to have a fully capable spacecraft without any difficulties," Dittberner said.

The three GOES are among the five spacecraft planned in the current series of weather satellites. At about $220 million each, the satellites represent a $1.1 billion investment in weather watching. Hurricane officials say their use is invaluable.

"We need them. We would be really nervous without them," Jarrell said. "It's hard to imagine forecasting without them."

The remaining two GOES in this series -- built by Loral Space Systems of Palo Alto, Calif. are scheduled for launch aboard Atlas rockets in 1999 and 2002. NOAA also recently made a $423 million deal with Hughes Space and Communications Co.for two future GOES satellites. Those two craft will ensure that a weather-monitoring system is in place through 2010, Dittberner said.

This story has been posted in the following forums: : Headlines; COS - Peru; Engineering; Space; Ground Stations; Project Management; NOAA