Justin and Steffanie Haring are ending their Peace Corps service and are heading back to Nicaragua, where they are starting a business 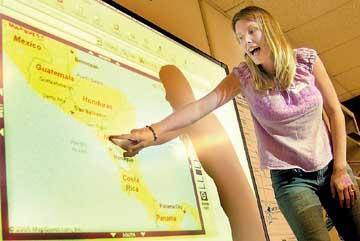 Justin and Steffanie Haring are ending their Peace Corps service and are heading back to Nicaragua, where they are starting a business

Just as Justin and Steffanie Haring of Competition are ending their Peace Corps service, Nicole Hutton of Lebanon is beginning hers.

The Harings returned from Nicaragua this week and visited Barbara Prock's third-grade class at Maplecrest Elementary School to review their Peace Corps experiences.

Hutton is in Botswana, in southern Africa, beginning her Peace Corps training.

The Harings had a short-lived celebration at home this week, because they are already heading back to Nicaragua, where they are starting a business. They will be living in San Juan del Sur, which is a fishing village on the southwestern Pacific coast.

"San Juan del Sur has a developing tourist industry and a friend of ours, who is a real-estate agent, told us about some opportunities," Justin Haring said. "There are many people building houses and many tourists wanting to rent houses, but there is no medium to do that."

The Harings plan to be involved in property management.

Justin said they plan to give the business a chance -- at least until November -- and if it is still in the black they will likely stay in Nicaragua several more years.

"This will be a challenge, but we have several things in our favor," Justin said. "The fact that living costs down there are very low means that we won't take that big of a hit if we don't start out big immediately. Also, if the income starts coming in it will be easier to save money while we're down there than if we were here as a young couple."

'A life of least resistance'

In the last two years, the Harings have lived in Las Praderas, a small village in central Nicaragua. Justin said they have learned to live more simply without electricity, hot water, television and electric lights.

"Living in Nicaragua is about adapting yourself to a life of least resistance," Justin said. "While living out in the country, we learned to do things for ourselves instead of having our machines do it for us.

"Instead of watching TV we had to play cards, have conversation, play games or read books. We've become accustomed to it and when I come home and watch TV now there's nothing to watch because nothing grabs my attention."

The Harings' job as Peace Corps volunteers was to encourage people to live more-productive lives. They were involved in several projects, from making stoves to introducing medicinal plant products.

Justin made "improved stoves" out of dirt. He said people traditionally cooked over a fire between two rocks as a stove, which filled their home with smoke. He added that the improved stoves had a chimney, used less wood and produced more heat.

"We learned that agriculture, like most things, was done by hand the way things have been done for generations," Justin Haring said. "It was hard and sometimes frustrating to get people to change. All we could do is show them a new way and encourage them to try it."

The Harings also encouraged people to produce and sell medicinal plants and use fruit-tree grafting. Justin said there was just one woman who agreed to make medicinal soap, but the grafting was popular because it allowed people to harvest oranges, lemons and tangerines from one tree.

While the Harings' Peace Corps service ended in April, they still plan to volunteer and help the people in Nicaragua.

"When you see a situation you like or would like to be a part of, don't be afraid to jump in the middle of it and see where it takes you," said Justin.

This story has been posted in the following forums: : Headlines; COS - Nicaragua; Small Business

These two are old good friends of mine and I'm trying to track down an e-mail or something similar. Anybody able to help me out?

Where they went to the peace corp, I went the opposite route and have been serving in the military for the past 7 years. Because of this, we lost touch...