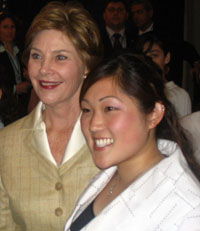 First Lady Meets with Volunteers and Their Students in Georgia

WASHINGTON, D.C., May 12, 2005 – What first began as a writing contest to teach their students how to compose an essay creatively in English, resulted in an once-in-a-lifetime meeting and national recognition for 16 Peace Corps volunteers and their students in the country of Georgia.

On Tuesday, May 10, in the capital city of Tbilisi, United States First Lady Mrs. Laura Bush and Georgia First Lady Mrs. Sandra Roelofs brightened the day of the 42 Georgian student winners, ages 12 to 16. The students had shared their ideas and thoughts to win this year's Peace Corps volunteer sponsored 2005 Writing Contest, known locally as the "Writing Olympics." While the students wrote only for the possibility of winning a certificate and English books, the two first ladies brought the winners unexpected national recognition as well.

"Meeting Mrs. Bush at the event meant the world to my students," said 23-year-old volunteer Thomas Phillips of Greenville, Ala.

"Though they may not have understood everything that was said during this event, the students were so thrilled and beyond happy — this is in and of itself the icing on the cake," said volunteer Helen Chung, 28, who helped organize the event. It was Chung's proposal to the Embassy that caught the interest of the events planners for the first lady's visit.

At the event, in a small, yet cozy auditorium, two Georgian school children read their essays before an anxious crowd. Following, the two first ladies fielded questions from the student winners. And, the 16 volunteers, who had come to the event with their students, were thanked by Mrs. Bush for their dedication to global education.

"To our utter shock, Mrs. Bush recognized and led applause for the Peace Corps volunteers that were in the auditorium and the work that we do — that despite our comfortable and privileged backgrounds we have decided to come to help those that need our help," said Chung. "So touching and graceful were the words, that tears came to my eyes hearing our first lady acknowledging our mission, work, endeavors here, in a place so far from home."

The annual essay contest started in 2004 when volunteer Ken Goff saw the advantages of the students in his foreign language classes learning to express themselves competitively, yet creatively, in English. As an education volunteer, he wanted a way for the youth to learn to write in an environment that did not chastise them for making mistakes, and which rewarded creative expression. So, he devised the "Writing Olympics" for his youth, who are rarely asked to write essays — whether in English or Georgian. His idea caught on as Helen Chung, and other Peace Corps volunteer teachers, encouraged their students to write essays in English and participate in the contest this year.

Even though the students had no idea the first ladies would be at the awards event when they began the writing contest, the number of students participating in the contest doubled this year to reach 629 entries. A 1st, 2nd, and 3rd place winners were selected from each region and grade level. Then, 140 regional winners, 18 National winners, and 3 selections were judged and the winners attended Tuesday's event.

The first Peace Corps volunteers arrived in the country of Georgia in May 2001. Since then, 105 volunteers have served in rural communities and towns throughout the country, where they offer and enhance English education for Georgian students and teaching methodologies for Georgian teachers. This year, 42 volunteers are serving in Georgia.

This story has been posted in the following forums: : Headlines; COS - Georgia; Presidents - Bush