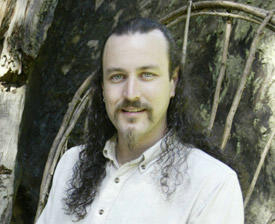 By Kimberly Wear The Times-Standard

While living halfway across the world, Scott Menzies learned what he would like to see in his own back yard -- communities encouraging interaction between neighbors and places where a car isn't always a necessity.

The 33-year-old Eureka resident came to appreciate the importance of those elements during two years of Peace Corps service in Nepal, another three years teaching English in Taiwan and extensive travels across Asia over six years, including a trek to Mount Everest.

In that time, he experienced village living without electricity or indoor plumbing and grew to appreciate the concept of having businesses and residences side by side. Despite the size of Taiwan, Menzies said he and his girlfriend Emily got to know their local noodle shop owners and other neighbors because so much of what they needed was in walking distance.

After finding his way back to the North Coast in late 2003, Menzies borrowed some pages from the Peace Corps mission and began a fledgling organization called Realizing Community that is "dedicated to promoting policy and action which will encourage the flourishing of natural and healthy communities."

A native of San Francisco, who went to high school in Sacramento, Menzies will be going back to Humboldt State University in fall to begin pursuing a master's degree with his thesis centering on the subject of community design.

He received his bachelor's degree in biology with a minor in botany there in 1995 before setting off to see the world.

"I saw pictures of the big trees and that was it," Menzies said. "It was the only place I applied."

Menzies, who also teaches Tai Ji Quan at HSU, said he has also been involved in the county's general plan process, attending meetings on the issue.

But people might recognize his name from another pursuit, which he calls his secondary mission: Educating people about election reform.

Menzies recently found himself in the news after helping put together a forum looking at voter reform issues. He and members of the Voter Confidence Committee gave a presentation on how ranked-choice voting -- used in San Francisco and under consideration in Davis -- works.

Menzies said he sees a connection between satisfaction with the electoral process with "making communities tighter."

His main interest is in finding ways to reduce stress and simplify people's lives, taking them out of their cars and back to connecting with their neighborhoods. But, Menzies said he also knows everyone has to make their own decisions about modern technologies.

On his last visit back to the rural village where he taught in the Peace Corps, Menzies found the people now had electricity generated by solar panels and hydro power. What was the first thing most of them hooked up? Television sets.

"I certainly appreciate the opportunity I had to see what it was like without all of that stuff because now I know where it fits in my life," Menzies said.

This story has been posted in the following forums: : Headlines; COS - Nepal; Community Design