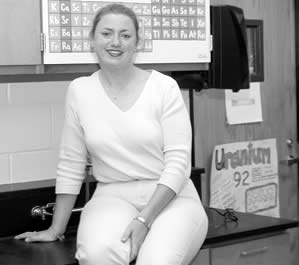 Three years ago, North Springs High School science teacher Rochelle Lofstrand saw a need for gay students to have a safe-space club on campus. For her vision in supporting those students, she will be honored with the first Georgia LGBT Educator of the Year Award next weekend at Kennesaw State University’s annual statewide LGBT Student & Organization Summit.

Lofstrand, whose father is gay, knew gay students at the school in north Fulton County were acknowledged positively by their peers. But they didn’t have a gay-straight alliance.

“I approached a student who I knew was openly gay and asked him if he thought a GSA would be successful at North Springs, and he was ecstatic,” Lofstrand says. “From then on, I realized the students had a need for this.”

Lofstrand drafted a proposal and pitched it to the school’s interim principal. While she says the idea was well-received, Lofstrand acknowledges fearing her efforts would be risky so early in her career.

“I was very concerned because the parent community at our school is very involved,” she says. “If someone didn’t like what we were doing, I was concerned there might be backlash.”

The school’s principal did field calls from some parents who were uncomfortable with a gay student group’s presence at North Springs, Lofstrand recalls.

But she believes any rumblings of concern from parents don’t represent the larger popular opinion at the high school.

“I look at my classroom and I see such a diverse group of people,” she says. “I have to believe the parent community is also very diverse and accepting.”

The group held small gatherings and events throughout its first year. But in October 2002, the GSA held a campus-wide pizza party to mark National Coming Out Day, welcoming some 80 students and 10 faculty members interested in the group. A second successful party was held last year.

One of Lofstrand’s goals was to have the organization ultimately serve as a resource for faculty and staff.

“I’d not only wanted this to be a very supportive thing for our kids, but also for our teachers, who may not have had much experience in how to deal with these things in and out of their classrooms,” she says. “We talked about it, and I was able to explain to them that it’s okay to treat these kids like any other kids.”

Acceptance of the GSA has increased, including attaining official club status during the current school year and participating in the homecoming parade. It recently received a $500 donation from Verizon Wireless. It also worked with Enlight, an organization that combats homophobia in grades K-12, to bring “Rainbow High” author Alex Sanchez to speak at North Springs this year.

The award — sponsored by the GLSA, the GLSA Advisory Board, Emory University Office of LGBT Life and Southern Voice — honors a middle or high school educator who has provided significant support to gay students.

“I think what makes [Lofstrand] stand out … is her willingness to get involved so visibly and so quickly in her school system, and to accomplish the things she has in such a short time,” Joyce says.

Award candidates were nominated by peers or supporters and selected by a committee of KSU faculty members. The winner receives a plaque and $200, presented during the second annual LGBT Student & Organization Summit, set for April 24 at Kennesaw State.

The summit is expected to draw about 200 participants from high schools and colleges around the state, Joyce says. The event features 15 panels and workshops facilitated by leading organizations including Georgia Equality, the Human Rights Campaign, YouthPride and PFLAG.

The day-long summit also includes the Georgia premiere of “Jim In Bold,” an award-winning documentary on the life and death of Pennsylvania gay youth James Wheeler. YouthPride sponsors HIV testing sessions, and entertainment will be provided by local performer Chris Burke.

At noon, Lofstrand will receive the Educator of the Year Award, and state Rep. Karla Drenner (D-Avondale Estates), the state’s only openly gay state legislator, will deliver the keynote address. The summit concludes with a networking reception from 4 p.m. to 5 p.m.

This story has been posted in the following forums: : Headlines; COS - Namibia; Gay Issues Secondary Education; Awards