Guatemala RPCV Marguerite Chandler has founded a food bank, a center for nonprofit social service agencies, a foundation devoted to the elimination of hunger and organizations to promote New Jersey's historical heritage 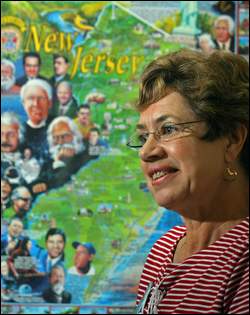 Guatemala RPCV Marguerite Chandler has founded a food bank, a center for nonprofit social service agencies, a foundation devoted to the elimination of hunger and organizations to promote New Jersey's historical heritage

Caption: Marguerite Chandler, who has worked for many charitable causes in the state, talks about her Celebrate New Jersey! festival, being celebrated throughout this month. STAFF PHOTO BY DAVID BERGELAND

A major tenet of the Quaker religion practiced by Marguerite Chandler since 1972 is to put faith to work for the benefit of the community, with God providing guidance on how to accomplish this through "leadings," insights acquired during prayer or meditation.

Chandler's leadings have prompted her to found a food bank, a center for nonprofit social service agencies, a foundation devoted to the elimination of hunger and organizations to promote the area's historical heritage. She even launched an unsuccessful 1990 bid as the 12th District's Democratic nominee for the House of Representatives.

But since October, she has been involved in what is perhaps her most ambitious project -- an effort to revitalize pride in the Garden State.

As coordinator of the first Celebrate New Jersey! festival, a statewide event through this month, the 62-year-old philanthropist is helping to showcase the state's historical sites and raise public awareness of the state's beauty and importance to science, commerce, culture, arts, education and technology.

The festival was launched by a coalition of 20 statewide groups, Chandler said, noting their involvement "underscores the breadth of what we're doing." More than 300 events are listed on the coalition's Web site, www.celebratenj.org.

The idea is one whose time has come, she said. Despite the jokes, public pride in the state runs close to the surface, and the celebration affords residents an opportunity to boast about their state rather than being forced to defend it.

"Like any issue of dignity, it starts from the inside and works out," she said. "When we claim our stature, the jokes will fall away."

Chandler's faith has been the tool that allows her to follow God's leadings without having any ultimate destination in mind.

"All of these projects are God-directed," said Chandler. "I don't look for them. They look for me."

It is this faith that has contributed to Chandler's success, not only in her philanthropic ventures but also in business. She is the president of Edmar Corporation, a commercial real estate company that is the former owner of the Central Jersey Industrial Park in Bridgewater.

The Celebrate New Jersey! campaign grew out of her work with the Somerset County Chamber of Commerce. As the Chamber's strategic planning chairman she developed a bus tour to promote the county's historical attractions. The tour was so successful that it led to the formation of the Heritage Trail Association.

Although the state -- and Somerset County in particular -- played a major role in the American Revolution, few residents are aware of it, Chandler found. Most people associate Virginia, Massachusetts or Pennsylvania with the Revolution when in fact New Jersey was far more important.

In the patriots' revolutionary ardor, she recognized the same leading spirit that informs her faith and that has inspired Quakers throughout the course of history to take up the cause of freedom and liberty, working for reforms in civil rights, women's rights and prison conditions. The patriots' struggles touched her heart, she said.

Indeed, hanging on the wall of her office at the historical Van Horne House in Bridgewater is a copy of a painting of Gen. George Washington kneeling in the snow beside his horse to pray for divine guidance. The painting serves as an inspiration, she said.

Chandler's latest opportunity arrived when she formed the Crossroads of the American Revolution Association, whose aim is to obtain the designation of a large part of the state as a "national heritage area" by the U.S. National Park Service. The designation will serve as an umbrella under which to organize local cultural and historical attractions.

Although legislation to create the national heritage area has been introduced in Congress, the effort has languished in part because of lack of local support, she said.

"People don't believe New Jersey could have been so prominent in the American Revolution," she said. "They think, 'How could it be? We've never heard of it.' "

Chandler attributes this lack of recognition to home rule -- the system of government in which the state is divided into 566 municipalities, each running its own show, often in ignorance of what's going on next door. While many residents have some knowledge of local history, few have a grasp of the whole picture, she said.

In praying for guidance on how to deal with the problem, Chandler was led to the Celebrate New Jersey! idea. The idea was brought up in a conference last fall in Princeton, and the response was so great that plans were made to hold the first festival this month.

The state's lack of recognition of its importance is nothing new, Chandler points out. Even during the Revolution, Benjamin Franklin described New Jersey as "a barrel tapped at both ends" -- alluding to New York and Philadelphia.

"The passion for liberty -- that was the roots of this place," she said. "They came from other places and found new life and new opportunities. The same is true for the immigrants who come here today."

Chandler, who moved from Somerville to Cape May Point three years ago to spend more time on her hobby of organic gardening, has been going nonstop ever since. She was interviewed last week, for instance, on her way to Commerce Bank Ballpark, where the Somerset Patriots were holding a Celebrate New Jersey! night.

She grew up in Somerville and Pattenburg and developed her sense of social awareness as a Peace Corps volunteer in Guatemala in the late 1960s. Later, she traveled to Calcutta, India, where she spent a year as a volunteer with Mother Teresa's Missionaries of Charity.

When she told Mother Teresa that hunger wasn't a problem in the area of New Jersey in which she lived, the Catholic nun replied hunger was a problem everywhere and challenged her to do something about hunger at home.

"When you say you'll do something to a saint, you're in big trouble," she said.

The result was the establishment of the Food Bank Network of Somerset County, the PeopleCare Center and the Worldworks Foundation for the elimination of hunger, as well as Chandler's involvement in many other activities devoted to eliminating hunger. Her determination to restore the state's reputation is no less sincere.

"We won't put up with the world defining us," she said. "We will define ourselves and claim our greatness."

This story has been posted in the following forums: : Headlines; COS - Guatemala; Service