Ugly Americans don't come much uglier than they do in Paul Theroux's latest novel. 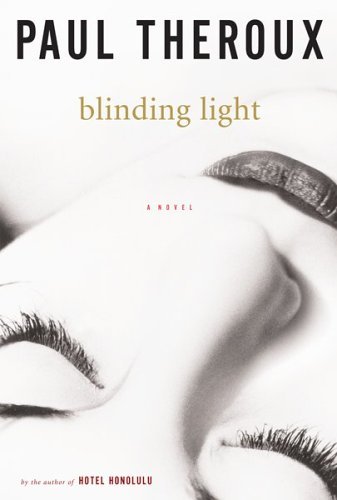 Ugly Americans don't come much uglier than they do in Paul Theroux's latest novel.

Ugly Americans don't come much uglier than they do in Paul Theroux's latest novel. The same goes for the Crass Brit and Creepy German accompanying those Americans on their "drug tour" through the jungles of Ecuador.

After several dozen pages with them ("Those bowl-shaped haircuts make them look like retards," one Yank says about the locals), some readers may start to wonder how soon they can get away from this repellent crew. Then the drugs kick in, dismantling all normal perception, and things get more interesting ... to a point.

In "Blinding Light," Theroux offers his most perverse and patience-testing novel yet. He has always had a sharp eye for impossible characters, notably inventor-utopian Allie Fox in "The Mosquito Coast" and the title character in "Millroy the Magician." But in both those cases, Theroux gave us a younger, more innocent pair of eyes through which to watch these gifted charlatans disclose their true natures.

That isn't true in "Blinding Light." Its protagonist, a writer who has produced only one book in 20 years, does have a skeptical girlfriend. But while she questions him, she's frequently as off-putting as he is. And she's anything but innocent.

For years, writer Slade Steadman has been trying to top his legendary travel book "Trespassing: Around the World Without a Passport," a cash cow that — thanks to film and TV adaptations and outdoor gear franchises — has made him astonishingly rich.

Nevertheless, the two decide to go through with a vacation they've booked in a jungle village in Ecuador, where Steadman samples the local shaman's brews. One of these renders him "blind in a powerful way," unable to see physically, but telepathically tuned in to all around him, including the thoughts of his traveling companions: their infidelities, their secrets, their acts of theft.

After securing a supply of the drug, Steadman heads home to his Martha's Vineyard estate, draws Ava back into his fold and starts dictating a drug-fueled, triple-X-rated inner-journey counterpart to "Trespassing."

Ava doesn't just take down his words but acts out each sex scene with him once "work" is done, in passages that can make you feel trapped in an endless Penthouse Forum column at times. Still, "The Book of Revelation," as the novel is called, is supposed to be wonderful stuff about "sex as trespass in the realms of touch, taste and smell; sex as memory, as fantasy, as prophecy."

Wonderful or not, the book is a hit. Steadman goes on tour (starting at Seattle's Elliott Bay Book Co.!), endures some drolly testing encounters with fans, then starts to disintegrate as his liberating blindness becomes a blind trap.

Theroux has constructed a parable on a massive scale here, a cautionary tale about "pride" and "posturing." He even introduces a political dimension into the book when he parallels Steadman's big secret (that his blindness is deliberately drug-induced) with the sex secrets of an unnamed president whom Steadman meets.

The book does hit some winning notes of gothic zaniness when Steadman, at his peak of hubris, starts to "drive blind, walk blind, shop blind, get money blindly from an ATM machine." Less credibly, there appear to be no females in the entire continental United States who don't want to hop into bed with Steadman — and their rote willingness gets a little boring after a while.

The novel's troubles go deeper, however. Theroux, while terrific on drug effects and shrewd on the select vineyard social circuit where Steadman is a player, never convinces you that there's anything superior about Steadman's mind. The guy is simply obnoxious, without enough wrinkles to his personality to keep him interesting for 438 pages. Ava has more kinks to her, but she reads like someone's sex fantasy rather than a plausible character. And too much about the novel — the "blindness" imagery, the sex — feels repetitious and overworked.

Theroux has dealt in nasty psychosexual territory before, in "Chicago Loop," the novellas of "Half Moon Street" and most recently "The Stranger at the Palazzo d'Oro." But those stories employed a delectably sinewy economy. As for his large-scale novels about doomed delusion, there is usually more at stake in them: whole utopias or religions, not the mere writing of a second book (no matter how sexy).

"Blinding Light" undeniably has its moments — but it can be a long slog getting from one to the other.


Buy the book on Amazon here.

This story has been posted in the following forums: : Headlines; Figures; COS - Malawi; Writing - Malawi

Paul Theroux was wrongfully let go by Peace Corps because of bogus charges.

Look at what his students had acess to. Now, he is one of America's best fiction writers.

Will the Peace Corps apologize for their head shrinking in Medical services and bogus charges that he was somehow overthrowing the "Lion for Life", the Corrupt Banda in Malawi.

Where is the apology?