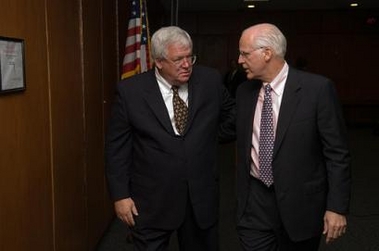 GREENWICH, Conn. -- Republican U.S. Rep. Christopher Shays has battled with his party's leadership and has called on the GOP's majority leader to resign.

But on Wednesday, House Speaker Dennis Hastert raised up to $70,000 for Shays at a Greenwich fund-raiser, and called the 4th District congressman a key member of the GOP team.

"We don't always agree," said Hastert, who also acknowledged that Shays is a top election target for Democrats. "People in this district need to know that we support Chris. He is a part of this team, and we are going to keep him a part of this team."

Hastert said it is important for Shays to have the resources to get the message out to voters.

Promising to be more aggressive during his 2006 campaign to get out his message, Shays said he is eager to seek re-election to an 11th full term. He said he asked Hastert to headline the fund-raiser, "to put to bed the criticism that a moderate, independent voice like mine means I don't have the support and respect of my own leadership. I do."

Just last week Shays bucked his leadership by pushing for a vote on expanded funding for stem cell research _ something Hastert opposes. But Shays praised the speaker for allowing the House to vote on the issue _ which passed overwhelmingly.

And earlier this year Shays became the first Republican to say that embattled House Majority Leader Tom DeLay should resign because of mounting ethical problems.

About 100 Shays supporters attended the fund-raiser at the Belle Haven Club overlooking Long Island Sound, paying either $1,000 each for lunch or $2,100 to attend a private reception and have a photo taken with the lawmakers.

Hastert's Greenwich appearance was part of a swing through the northeast for fund-raisers in Pennsylvania, Vermont and Massachusetts.

This story has been posted in the following forums: : Headlines; Figures; COS - Fiji; Politics; Congress; Election2006 - Shays