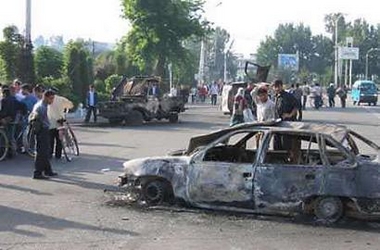 TASHKENT, Uzbekistan (AP) - Uzbekistan denied Saturday restrictions on a U.S. base are in retaliation for criticism of the government's response to last month's uprising in the Uzbek city Andijan.

The Pentagon said Wednesday that Uzbekistan has stopped allowing U.S. nighttime flights from its air base at Karshi-Khanabad, which its forces use to support operations and supply neighbouring Afghanistan.

A statement from the Uzbek Foreign Ministry said the restrictions were imposed three months before the suppression of the rioting in Andijan "for the reasons that the American side is well aware of,"

Uzbek President Islam Karimov has blamed the violence on Islamic militants and rejected U.S. and other western calls for an independent international inquiry.

The ministry statement also seemed to hint the United States was behind the Andijan disturbances because of the restrictions on flights at the base.

"Following the logic of the American mass media, the conclusion should be that the events in Andijan was a consequence of - not a reason for - Uzbekistan's decision to restrict the American military flights," the statement said.

A Foreign Ministry official, speaking on condition of anonymity citing the sensitivity of the subject, said the reasons for the flights restrictions were technical and subject to negotiations between Washington and Tashkent but refused to elaborate.

The U.S. military has taken steps to adapt to the restrictions, Pentagon spokesman Bryan Whitman said.

Uzbekistan has been a key ally in the U.S.-led war on terror, opening the Soviet-built air base to U.S. forces shortly after the Sept. 11, 2001, terror attacks.
© The Canadian Press 2005