Morocco RPCV James Rupert writes: An estimated 40,000 to 60,000 children survive in Kabul these days by hustling on streets made dangerous by aggressive drivers, thieves and even kidnappers. But in the downtown school called Aschiana ("nest" in Persian), more than 800 of them find a miracle in every room. 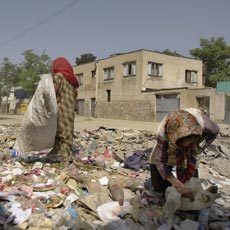 Morocco RPCV James Rupert writes: An estimated 40,000 to 60,000 children survive in Kabul these days by hustling on streets made dangerous by aggressive drivers, thieves and even kidnappers. But in the downtown school called Aschiana ("nest" in Persian), more than 800 of them find a miracle in every room.

A bitter lesson in capitalism
For Kabul street urchins, an overcrowded school is their only hope. Now, that is disappearing too.

KABUL, Afghanistan -- Early each morning, hundreds of street kids -- the trash-pickers, beggars, water-carriers and taxi touts -- pile through the gates of a slightly rundown school. They arrive like children: shouting, shy, curious, nervous. And like survivors of war: thin, ill-dressed, wary and often hungry.

An estimated 40,000 to 60,000 children survive in Kabul these days by hustling on streets made dangerous by aggressive drivers, thieves and even kidnappers. But in the downtown school called Aschiana ("nest" in Persian), more than 800 of them find a miracle in every room.

In one class, 62 girls squeeze into 17 desks, practicing writing and math. Next door, music students talk quietly in a corner, prevented from playing their traditional instruments just now because another class is at the computer, shouting greetings down a video link to schoolkids in Japan. In other rooms, instructors and social workers teach tailoring, carpentry, land-mine awareness and a dozen other subjects.

But the miracles will end soon. A wealthy Afghan businessman and members of the former royal family say they plan to build a five-star InterContinental Hotel on the site, and they have told Aschiana to leave. The school has no place to go; its director says that, within days, he will have to turn his students back to full-time destitution.

Across war-ruined Afghanistan, essential roads, schools and irrigation systems are being rebuilt at a creeping pace. In Kabul, though, the money of the wealthy is pouring in. High-salaried foreign aid workers, rich expatriate entrepreneurs, corrupt government officials and drug-smuggling warlords are competing for comfortable homes and offices. Amid the fever to build villas, shopping centers and hotels for this elite, obstacles such as street children, slum-dwellers -- and laws -- get shoved aside.

It happened last year on a government-owned tract in Kabul where hundreds of refugee families from the provinces had lived for years in mud-brick hovels they built themselves. Unfortunately, the land adjoined Wazir Akbar Khan, the neighborhood where Kabul's wealthiest residents live in spacious, walled villas. When the need for more villas became urgent, the government bulldozed the squatters' homes and sold mansion-sized lots to top officials and their cronies.

The downtown school is one of six for families that are too poor or fragmented to send their children to public schools. While public schools are free, the cost of books, supplies, lunches and, occasionally transportation, is too steep. Aschiana's director, Muhammad Yusuf, says his group is teaching -- and feeding hot lunches to -- more than 9,000 street kids citywide.

Aschiana teaches young children literacy and math in hopes of returning them to the regular school system. Older children unable to re-enter school are taught vocations. Everyone learns survival skills such as the importance of avoiding dirty drinking water and how to recognize unexploded ordnance. "A lot of kids gather scrap metal to sell," Yusuf explained.

The range of Aschiana's services is astonishing: drama, music and painting classes help children express feelings and deal with traumas. Portraits, landscapes and still-lifes by the children fill the walls. Classes for mothers teach nutrition and child rearing. A child-run bank encourages the students to save for their futures and offers loans for older kids to start businesses or pay for medical care or outside studies.

On Salang Wat, a chaotic main street downtown, Aschiana's children work the bottom end of a brutish economy. A boy wearing a castoff pink snowsuit over a T-shirt stands amid traffic and diesel smoke, hoarsely shouting the destination of a minivan taxi headed to a suburb. A half-dozen girls wander among the carts of vegetable and cigarette sellers, hawking thin plastic bags to shoppers for their purchases.

On a good afternoon, Rukiya, 11, can make 30 Afghanis (60 cents) by selling bags. Then she might spend a couple of coins to ride a bus to her home 3 miles away. Often, she walks.

Rukiya and three siblings live with her uncle's family of eight in a pair of ragged tents pitched in the bombed-out shell of the former Soviet Cultural Center. The family says Rukiya's parents are dead. Her uncle, Hakim Khan, said he moved the family to Kabul three years ago from Pakistan, where they took refuge during Afghanistan's years of war. In Pakistan, "we were as poor as here ... and the weather was very hot," he said.

Khan sells vegetables on the street near the family's camp. Rukiya and her older brother, who hauls water to sell by the cup in a bazaar, are the family's other income earners. She and one of Khan's daughters are the only two of the 10 children to attend school.

Aschiana once ran a temporary school in a tent for refugees at the cultural center but moved it to a bigger camp at the edge of town. Four men at the center approached a foreign visitor last month to plead that Aschiana return. They pointed to dozens of kids chasing each other around the debris-littered grounds. "Our children have nothing," said one man.

Aschiana began its work in a Kabul depressed and isolated by the religious dictatorship of the Taliban. In 1997, the organization signed a 10-year lease to run its school in the former home of Prince Inayatullah Seraj, the brother of King Amanullah, who ruled Afghanistan in the 1920s.

Last winter, a tall businessman wearing a tailored suit and a gold Rolex visited Aschiana, Yusuf, said. "He told me he had bought the land gave us a deadline to move," Yusuf said recently. "It passed six weeks ago." The businessman's work crews have begun demolition work, felling trees and toppling walls at one side of the compound.

Aschiana pays $1,500 a month in rent -- paid for by donors, including the European Union and World Bank -- but Kabul's race for prime real estate has pushed rents for alternative downtown sites to $9,000 a month. "We will not be able to stay in the center," where thousands of children work the crowded streets of the main bazaars, Yusuf said.

Across the courtyard from Yusuf's cluttered office, the businessman, an Afghan living in Dubai, has set up a spare, elegant room with soft carpets and a glass-topped desk. Outside the window behind his chair, the street kids dash past on their way to and from class. The businessman spoke on condition his name not be published -- "just call me 'the investor,'" he said -- because in Kabul's lawless chaos wealthy businessmen are at risk for extortion and kidnapping.

The investor is frustrated. "People who don't understand accuse me, saying, 'Why are you pushing out Aschiana?'" he said. "They don't understand that this hotel is necessary for Afghanistan's economic development."

He envisions 200 luxury rooms and 80 serviced apartments where corporations -- he mentioned Sony and Phillips -- can send their people to work. The hotel might employ as many as 2,000 people, he said. "And 500 children must not be a barrier to the reconstruction of our country."

"We have been waiting for eight months for Aschiana to move," the investor said. "I am losing money every day." If the school can find no other place, "I am not [Afghan President Hamid] Karzai to help them. It's not my responsibility, it's the government's responsibility."

Moments later, the investor was more conciliatory. "I will be a partner for Aschiana for the future," he said. "It is run by very nice people ... We should provide milk for the children." If only he can get the school out and the hotel built, he said, he is ready to give the children jobs when they grow up.

No sympathy for school

The investor declined to discuss details of the project, many of which are murky. A spokeswoman for the British-based InterContinental Hotels Group said it has signed no deal for a hotel in Kabul and is "negotiating with several potential partners."

Members of the Seraj family say their current patriarch, Prince Hamidullah, sold the land to the investor for more than $4 million at the encouragement of younger relatives, including Azim Nasser-Zia, chief of protocol at Afghanistan's Foreign Ministry. Nasser-Zia was unsympathetic to Aschiana, saying his family had tolerated below-market rents and missed payments from the group -- "a stupid thing to do." He said Aschiana has been offered land in northern Kabul and denied that it needs a downtown location, saying the assertion that street children live in this part of the city "is false information."

An older relative of Nasser-Zia, Prince Abdul Ali Seraj, disagreed. "I feel very bad for Aschiana and those children," he said.

The organization is "doing the work our country needs after 20-some years of war," he said, and it "should be helped to move" to a new location.

"Unfortunately, this is a case of commercial interests and millions of dollars versus a charity," Seraj said. He voiced understanding that his relatives had sold the land. The surviving children of Inayatullah are numerous, aged, scattered and not rich, he said. "That money was very hard to walk away from."

Seraj said it's too late to set conditions in the sale to protect Aschiana. "The papers have already been signed," he said. But Kabul city officials said they are uncertain the investor has legally bought the land or abrogated Aschiana's lease. "That plot has not been recorded as sold," said an official of the district court that would have to approve the sale.

Still, in Kabul's battles over land these days, laws are no more than a petty annoyance. "People with money are paying bribes ... forging property records to get land they want to develop," said a senior Afghan official. Even within the confines of the capital, "we have no functioning courts, and no real enforcement of laws," he said.

"The lack of transparency in this [Aschiana's ouster] is very troublesome," said Dennis Kux, a retired U.S. ambassador who lives in Washington. "Why all the secrecy, and why the rush to force the school out?" With his wife, who has visited Aschiana, Kux has formed a Washington-based foundation to help raise funds for the school and find it a permanent home in central Kabul.

Last week, however, the demolition work had crept to the edge of the school building, and Yusuf said his appeals to Karzai's office had brought no response. "This is not our responsibility; it belongs to the Social Affairs Ministry," said Rafiullah Mojaddedi, a media officer for Karzai.

Yusuf sat in his office last week amid piles of children's paintings, health-care supplies and files. "We're moving equipment into storage," he said, smiling sadly. "You see, they are beginning to demolish the far end of our building, and it will not be safe for the children to come. We will have to stop work any day now and tell them to leave."

This story has been posted in the following forums: : Headlines; COS - Afghanistan; COS - Morocco; Journalism