Years after her service in India, Gail Singh continues to recommend the Peace Corps to everyone looking to change the world, one village at a time 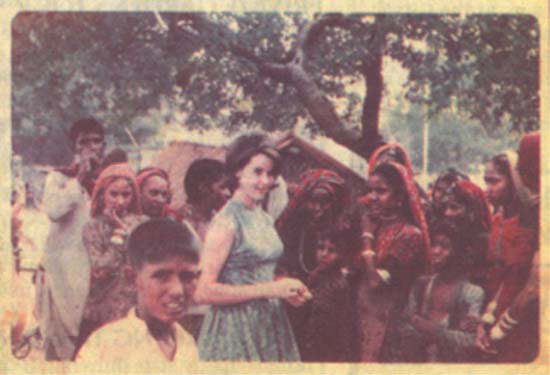 Years after her service in India, Gail Singh continues to recommend the Peace Corps to everyone looking to change the world, one village at a time

Esprit de Corps
Years after her trip to India, Gail Singh continues to recommend the Peace Corps to everyone looking to change the world, one village at a time.

Caption: Gail Singh at her first assignment in a remote village of Central India in 1965. Singh was likely the first white person the Indians had ever seen.

"When I joined the Peace Corps in 1965, I was just like everyone else-naïve and idealistic," Gail Singh said as she sat in her restaurant "That Fancy Café" where her travels linger in the Indian Curry dish she offered her patrons earlier that day. Like curry itself, Singh is an enticing woman who is filled with as much passion as her curry is spice.

"I have been accused of being a Pollyanna," she said, "but I still feel that if they send the Peace Corps volunteers instead of the military [to the Middle East] we wouldn't have the problems we have today. Americans have this image as being pompous and self-serving, but there are thousands of villages around the world whose people remember an American who came to them without an agenda and became their friend. It was an American who helped them with something as simple as digging a fishpond or constructing a chicken house. It is true what they say-you can attract more flies with honey-why not follow that philosophy. Like Gandhi said, it is not a contest of wills where I win and you lose or you win and I lose; it's how you deal with each other and result where we end up being friends and respect each other and in turn, make the world a better place."

"I feel the majority of people who volunteer with the Peace Corps are not running away, but running towards something; perhaps to slay the dragon. The Peace Corps has changed so much since I joined back in its early days. It was so unstructured then. But I wouldn't change it and would recommend it to anyone," Singh said.

At the ripe age of 20, Singh signed up for the Peace Corps. Her family thought she was crazy-her mother refused to ride with her to the airport. Of the 150 that were invited to train for the project called "Village Level Nutrition" in India, only 90 completed and were selected to go. Singh remembers that Southerners were a very rare thing in the Peace Corps. At the time, there was just one other couple there from the South, Georgia that is. Training for the volunteers was for three months after which they were off to a land where things they read about in books became an everyday reality.

"I was put as far into the jungle as one could go," Singh recalled of her first project site in central India. "They sent me off with one other volunteers with directions that said 'take a train, ask directions when you get there and walk to the village'. Singh laughed remembering the cryptic instructions.

She recalls the slogan of the Peace Corps "The toughest job you'll ever love" and agrees whole-heartedly. For those who want to make a positive change in the quality of life on the planet, the Peace Corps comes high on Singh's recommendations. She adds, "You certainly get more out of it than you give."

There are lots of images that accompanied Singh after she left India. The smell of jasmine in the evenings, the children learning from their parents how to beg, puffs of dust on roads, bullock carts in open air markets, the leper in the bazaar, skinny legs, swollen bellies and distorted limbs-these are all images burned on Singh's brain and in her scrapbook. Life's lessons seem harder to take when they come in a different language.

Granted, every day was not as inspiring as the few that stuck with Singh. There were days when her friend's expression, "How dare the sun come up for another day," seemed to permeate the air all around. Singh admits that her days volunteering in India were some of the worst and best times of her life. But like everything, "Victories come slowly," Singh said.

One triumph Singh and fellow volunteer; Mary Jane, came away with was that in northern Indian locale. The two spent 6 months coaxing a deprived two year old girl the seemingly luxury of milk powder. The girl had never received enough nutrition or care to stand on her own tow legs; while her brother ran around her listless, seated body full of zest and happy. But it goes deeper than just giving the child the mild, "The miracle wasn't that Jesus actually caused the fish and the loaves to multiply but that they learned to share. It wasn't that we fed her, it was that her mother started paying attention to her and treat her the same as the boy child."

Like the milk powder that had been sitting in storage, Singh and Mary Jane also asked for permission to distribute vegetable seeds that were previously just being stored in a warehouse when the natives could have been growing vegetable gardens all the while. Once again, after gaining permission from the government agency that owned the seeds, the volunteers set off on a mission to change the world, one village at a time.

"We would go out to the sites and distribute the seeds telling the farmers and anyone who would take them that the vegetables would enhance their diet. We really didn't have any idea what they would do with the seeds-throw them away or what. Then the next season they all came back asking for more!"

As for the Peace Corps, there are projects like the village nutrition one in central India being developed all over the world every day. Thousands apply driven by their desire to 'change the world'. In the end, each volunteer is making a difference and the government liaisons between the Peace Corps and individual countries make it so those who need help get it. Whether it is learning to raise pigs, how to stop the spread of AIDS, or learning water purification, the smallest steps to nourishing the world's people and teaching self preservation is what the Peace Corps is all about. Stepping onto a foreign land, not destroying what is there, but helping to preserve the traditions while improving the quality of life.