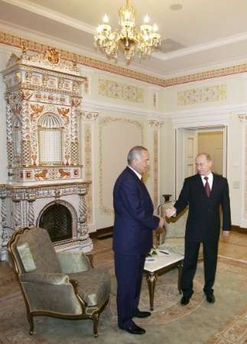 Russia is to conduct joint military exercises with Uzbekistan, in a show of support for Tashkent after a bloody government crackdown.

Russia is to conduct joint military exercises with Uzbekistan, in a show of support for Tashkent after a bloody government crackdown.

Russia's defence minister said the joint manoeuvres would be the first since the collapse of the Soviet Union.

Sergei Ivanov also defended the actions of the Uzbek government in suppressing an uprising in Andijan in May, in which up to 500 people are said to have died.

Mr Ivanov said protesters were armed and had attacked buildings in the city.

The Uzbek government said 173 people were killed, most of them Islamic militants and "terrorists" receiving instructions from outside the country.

Witnesses dispute this, saying that troops opened fire on a rally, killing up to 500 people, among them women and children.

Speaking at a meeting in Moscow with Uzbek President Islam Karimov, Mr Ivanov said Russia agreed with Uzbekistan that the uprising was not spontaneous.

"We actually knew how it was prepared, or at least knew certain elements," he said.

Mr Ivanov said foreigners had been involved, adding that it was absurd to say troops had opened fire on peaceful demonstrators

He said the protesters "attacked the police, then they attacked a military unit and seized its weapons and arsenal, then there was the prison, then the torched cinemas and cultural buildings".

The joint Russian-Uzbek military exercises would be held in central Uzbekistan over the summer, Mr Ivanov said.

Russian news agency RIA-Novosti reported him as saying the manoeuvres would be of a special nature in light of the events in Andijan.

This story has been posted in the following forums: : Headlines; COS - Uzbekistan; COS - Russia