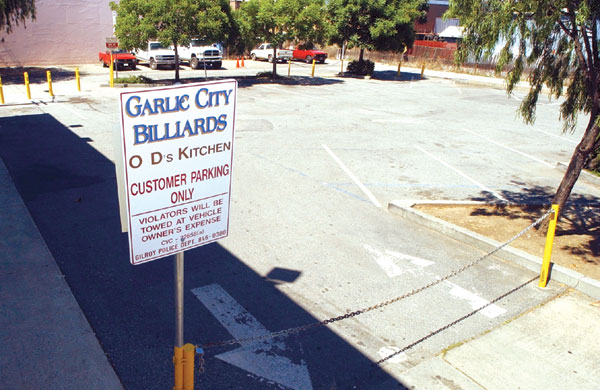 “I went out there with him and when he saw the sign, he said he was in the wrong,” Tapella said of the congressman, whose car he towed about two years ago. “But he was really nice about it.” Congressman Mike Honda of California served as a Peace Corps Volunteer in El Salvador in the 1960's.

Park at your own risk

Caption: The entrance and sign on the Martin Street side of the parking lot behind Gilroy Billards, across from OD’s Kitchen. Photo by: James M. Mohs/Chief Photographer

Gilroy - It happened to a policeman. Then a congressman. And now Maryalice Ritti. The Morgan Hill resident is the latest to learn the hard way that Bob Tapella, owner of Garlic City Billiards on Monterey Street, has a very strict definition of “customer.”

Last week, she joined the expanding list of people whose cars Tapella has had towed from the lot behind his pool hall. Ritti had dined at OD’s Kitchen, which according to signs posted in the lot, shares the parking area with the pool hall.

Ritti’s car was OK in the lot while she was eating at OD’s, but she ran afoul of Tapella’s unwritten and unforgiving parking regulations when she left her vehicle there beyond the diner’s 2pm closing. When she returned to the lot from some downtown shopping at about 3:30pm, her car was gone.

Tapella, who had arrived at 3pm to start preparing the pool hall for its 4pm daily opening, gave her a grace period before calling the tow truck company. She was perplexed and frustrated since her car had been the only one in the lot.

“Customer parking only means a patron of the business,” Tapella explained. “Once somebody leaves, they’re no longer a customer. I show up at 3pm, I want that lot cleaned out because I don’t know where these people are. I went over and knocked on (OD’s) door and asked ‘You got anybody in here?,’ and he said they’re closed. I went back over and waited another half hour and called (the tow truck company) at 3:30pm.”

Ritti calculated her lunch in downtown Gilroy cost more than $200 after the cost of towing.

Tapella doesn’t discriminate when it comes to violators. He has towed customers of area bars, the bowling alley, the new gym that has opened up a few doors down. He has towed a Gilroy police officer’s personal car and Congressman Mike Honda’s (D-San Jose) vehicle.

“I went out there with him and when he saw the sign, he said he was in the wrong,” Tapella said of the congressman, whose car he towed about two years ago. “But he was really nice about it.”

This story has been posted in the following forums: : Headlines; Figures; COS - El Salvador; Politics; Congress; Humor