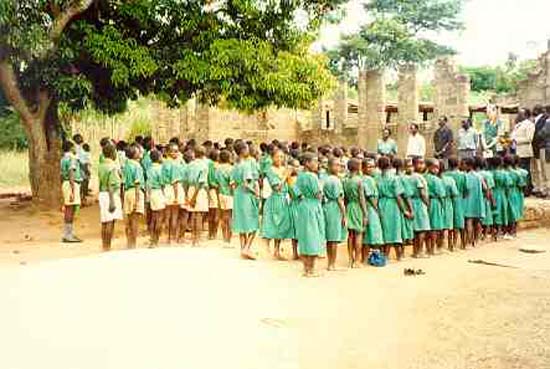 As I arrived, a lady asked a question about how an HIV+ mother could have a HIV- child. Through a translator, Alison answered the question as thoroughly as possible. Her answer was greeted with the clever response, "I don't believe you." Then the people in the room proceeded to talk amongst themselves and propagate some of the misconceptions that are so common here. Alison was powerless against the torrential force of the Masai women and their thoughts about HIV. After another discouraging ten minutes, the women left to join a class being held that was teaching all the general information about HIV.

This last Saturday, the entire SIC group held a community day at Mzimuni Primary (the school that I teach at about an hour away from Arusha town). The day provided the local community with classes teaching them about HIV from the biology through transmission and condom demonstrations to living and caring for a person with HIV. There was also music and other forms of entertainment, free food and free testing.

I was not scheduled to teach any particular part of the curriculum, but was hoping to see some of my students and to observe the testing procedure (as I had done at the in-town testing). As with many things in Arusha area, things got started a couple of hours late. We filled the time by playing frisbee with the kids and practicing our broken Swahili (at which I could definitely use more practice). When more of the adults showed up , classes began, and as I wasn't doing anything, I wandered over to the Question Room where SIC staff was fielding random questions that the people had. Alison, a friend from Stanford, was heading the operation.

As I arrived, a lady asked a question about how an HIV+ mother could have a HIV- child. Through a translator, Alison answered the question as thoroughly as possible. Her answer was greeted with the clever response, "I don't believe you." Then the people in the room proceeded to talk amongst themselves and propagate some of the misconceptions that are so common here. Alison was powerless against the torrential force of the Masai women and their thoughts about HIV. After another discouraging ten minutes, the women left to join a class being held that was teaching all the general information about HIV.

The Question Room was closed for the rest of the day. It was decided that it would just be better for the people to ask their questions after they took the class to ensure 1) that they were going to the class and 2) that any clarifications that needed to be made could be in order to prevent miscommunication.

After the flop of the Question Room, I wandered about until I nearly ran into a tarantula on his way somewhere. I wandered away from that spot very very rapidly. Once testing began, I asked if it would be possible (pretty please) to observe how the procedure went and offered to take down the statistics as well.

Deus, who you'll remember I went on safari with, was heading the actual testing of people while "Dr." Linus provided those interested in testing with pre- and post-test counseling. I walked into the room and Deus told me to sit down, so I walked over to the stats book and he said, "No, come sit here. You know how to do this right?" I sat down and told him the procedure that I had seen Chava do at the in-town testing, and about 1 minute later we started testing the first of many people!!! The first person I tested was an older gentlemen (about 50 or 60) and he had no idea that I had never done it before. I was so nervous, but I figured the only thing worse than testing a person while you're nervous is testing someone who is nervous because his tester is nervous.

I watched Deus out of the corner of my eye and let him begin about five seconds ahead of me, just to make sure that I was doing all of the steps correctly. First, I wrote the man's number down on the test strip (the numbers are used to identify the person since all tests are anonymous). Then peeled back the protective covering from the test. I put on my gloves (which were two sizes too big) and dunked a cotton ball into a pink liquid (that I assume was some sort of alcohol). I then reached for the man's giant hand, observing a slight shake in the his hand as well as in my own. I randomly chose the middle finger (so everyone that I tested essentially flipped me off) and cleaned it with the cotton ball. I then unwrapped a disposable needle that was flat like a paper clip and came to a point on one end.

Without looking into his eyes, I placed the needle point near his finger tip and pushed...skip here if you don't like to hear about blood......The needle being safely discarded into a hazardous waste bucket, I fumbled in my giant latex gloves for a capillary tube that I had set out in front of me. Once obtained, I collected the blood and blotted it onto the test strip in the place indicated. While we say that you only need three drops of blood for the Rapid Test that SIC Mobile testing unit performs, it actually requires like five or six. I had to squeeze his finger about ten times to get enough blood to completely saturate the strip. Poor guy, but damn he clotted fast.

So I made sure with all of the other people that I tested that I poked them hard enough and kept pressure on the wound so that the blood would continue to come out. After that first one, I was a pro. Bring on the HIV testing - which is exactly what happened. We only let in two people at a time because there were only two testers and every time we opened the door, a mob of test-seeking Tanzanians rushed in.

After herding them back out, we continued. There was only one guy that I had to prick twice; his fingers were frozen and he wouldn't extended the digit fully (I didn't mind pricking him twice). The people that we tested ranged all over the spectrum: old, young (11 or so), men, women, pregnant, brave, fraidy-cats, etc. It was a really fun experience for me (sorry if that sounds heartless) and super interesting (great adjective, I know). About half-way through the day (around 3pm), Chava came in to takeover and I left on the first truck back to town. By the time I left, Deus and I had tested around 60 people. If I may share the results, since they are anonymous and none of you are in Tanzania, not one person showed up positive. Y

ou may recall that at our in-town testing, 36 people all tested negative. So on the way back, we discussed possible reasons as to how this could be. One theory: the test batch or test itself is flawed or damaged. One person, however, mentioned that the same batch was used at a different location and did yield some positive results.

My was of rationalizing follows like this: if there is an HIV infection in a small community, then you would see a large number of HIV+ people when doing random testing, but if there is not a prominent HIV infection in that small community then not many people would be positive. Make sense? If not, ask me to clarify in individual emails ( I feel like I am holding class - come to my office hours).

The entire thing was a great experience (though hot as hell) and I think we reached a lot of people that otherwise would not have had access to education and testing. Hopefully we are making a small difference here, it is nice to think so. Until next time (or office hours).

This story has been posted in the following forums: : Headlines; COS - Uganda; Blogs - Uganda; HIV; AIDS; AIDS Education