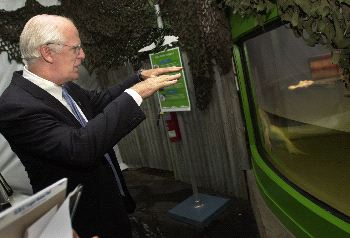 NORWALK -- U.S. Rep. Chris Shays, wearing a blue suit and yellow tie, waded knee deep into Long Island Sound at Calf Pasture Beach on Friday morning. His hair and clothes remained completely dry, despite a steady light rain. In fact, Shays did not have to leave the cozy confines of the Olin Technology Lab in the Maritime Aquarium at Norwalk to experience the walk into the Sound. He did all this in real time vicariously through Joe Schnierlein, an educator at the Aquarium.

Schnierlein, an intern and a video cameraman, caught horseshoe crabs and small fish near the Coast Guard facility in Norwalk as a way of demonstrating the Aquarium's "distance learning" educational project. Shays, who would be instrumental in procuring federal funds for the Aquarium, toured the attraction for the first time in years and was amazed at the progress made since his last visit. "There's a great deal of energy here and I'm thrilled to see so many people utilizing the facility," he said. "This just illustrates the energy of Norwalk."

Shays, R-4, visited the Aquarium briefly during the annual Red Apple Dinner in April and suggested to new Aquarium president Jennifer Herring that they get together for a tour. "This was just the first step," Herring said about what she hopes are continued discussions with Shays about federal funding.

On June 15, the board of trustees of the Maritime Aquarium approved a new mission and vision statement. Part of that mission includes protecting the Long Island Sound through education in the form of living exhibits, marine science and environmental education. Those exhibits will also be more sharply focused on the Aquarium's mission of helping people recognize the Sound as a valuable resource. The Aquarium is considered for entertainment and educational funds, according to Shays.

On Friday, the Aquarium used the opportunity to show off its state-of-the-art educational tools. The Aquarium is already using its "distance learning" tool at area schools. Students may sit at their desks in school and watch an Aquarium educator perform live demonstrations from a remote area. Norwalk Mayor Alex Knopp stressed during the presentation that the Aquarium and all Norwalk schools will be linked by the upcoming fiber optic municipal area network, that will also include the police and fire stations and City Hall. Knopp added that science will soon become part of the Connecticut Mastery Test and the Aquarium's distance learning may be an integral part of the science curriculum at Norwalk schools.

On Thursday, Schnierlein displayed just-caught aquatic animals and gave descriptions and histories of them as Shays, Knopp, Herring and about a dozen other people watched television screens on the third floor of the Aquarium. The connection was made possible by a transmitter located on a stack at Manresa power plant. Jack Schneider, animal curator at the Aquarium, led the discussion at the Aquarium while Schnierlein answered questions at Calf Pasture Beach. Schneider said the program can have a lasting impact on school children as the Aquarium "establishes a rigorous scientific protocol so it has real meaning for kids."

Shays, without needing to hold a microphone or wear a headset, fired off a few questions to Schnierlein. "Can we see Peach Island?" Shays said. Schnierlein obliged and directed the cameraperson to pan over to show Shays a glimpse of the small island in Norwalk Harbor that was recently added to the U.S. Fish and Wildlife Service's National Wildlife Refuge system.

Herring led Shays on a tour of the Aquarium following the distance learning demonstration. The rainy day and scheduled summer camp visits had the facility packed with children. Herring showed Shays the popular shark tank from above and then directed him to the rare albino alligator, which is a summer resident at the Aquarium. "There are real financial needs and good educational programs going on," Shays said. "We have to figure out how the federal government can be more helpful. The education and science-based research adds to the credibility in the request for federal dollars." "I think he was impressed,"

Herring said of Shays. "Half a million people visit here each year. The people experience the wildlife of Long Island Sound. We help people better connect with nature and hopefully get them interested in preserving the Sound for future generations." More federal funding will only help that cause