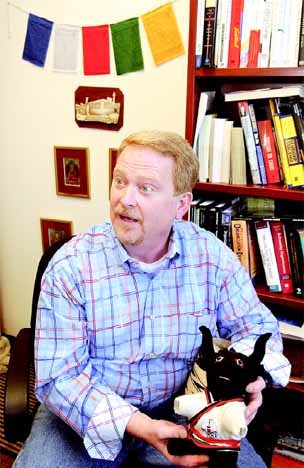 “I started out in the Peace Corps helping nonprofit organizations raise funds and connect with the community. Through that, I got into training workshops and into teaching courses in colleges. I loved teaching. When I got back from the Peace Corps, I went to school full time and worked full time so I could get through school as quickly as possible. In about five years, I finished two master’s degrees and a doctorate."

Sandy Wells: Innerviews
# ‘I have that international bug’

Caption: In an office filled with artifacts from his global travels, Drew Ciccarello explains about the yak, the official animal of Tibet. He’s leaving the University of Charleston where he heads the graduate business programs to accept a university teaching position in Egypt. Photographer: Chip Ellis

He was a precocious child who sang and performed with his Osmond-style family. Through high school, he dreamed of performing on Broadway. Then reality, a pesky thing called making a living, got in the way.

Drew Ciccarello ended up using his stage talent in ways he never would have imagined. He sang for Hillary Clinton in Romania. He hosted a television show in China. He acted in a Chinese movie. How unlikely can you get?

An ad for the Peace Corps changed his life in midstream. He served in Nicaragua and Romania, then taught for two years in China. Along the way, he acquired two master’s degrees and a doctorate.


Now, he’s director of the MBA program at the University of Charleston. But not for long. In August, he travels to Egypt for his next global adventure — a teaching position as (get ready for this) the Endowed Chair in International Leadership and director of the Executive Leadership Training Institute at the American University in Cairo.

“I always thought I wanted to be on Broadway. I grew up in musical theater, like the Light Opera Guild. As far back as I can remember, my sister and I sang. We were the Four Ciccarellos. My mom played piano and my dad played drums. We started out performing at church dinners. We grew and grew and added more people to the band.

“I graduated from George Washington in 1976, the bicentennial year. By that time, we had a group called the Spirit of ’76. In my senior year, we toured with the Amtrak Freedom Train. We were kind of like the Osmond family, only we never got that big.

“So I moved to the family business, Association Management. Mom and Dad worked with the contractors association and engineers and were in politics and stuff. It was about this time that I first heard about the Peace Corps. It sounded like the neatest thing. But while I was making plans, life happened and the Peace Corps got put off.

“I got into athletic funding with colleges and universities and spent five years with the Olympic Committee as director of development for the training center. The next thing I knew, 15 or 20 years had passed. I was never really happy. There was something inside of me that said there was more, that I couldn’t just settle for a normal job.

“In the mid-’90s, my grandfather was very ill and someone needed to take care of him. I moved back to Charleston and started my own specialty cleaning business. The cleaning took place at night, and I would do the marketing for jobs and take care of him during the day.

“After about a year, grandpa passed away. That’s when I had an epiphany. I truly believe that’s when my life really started, the life I wanted, the one I was destined for.

“I saw an ad for the Peace Corps here at UC. I was finishing my undergraduate degree. I signed up, did a stint in Nicaragua and one in Romania and caught the bug. Life in other cultures, that was what I wanted to do.
- advertisement -
Garnet Career Center

“In Romania, I worked with the orphanage that Michael Jackson had donated $250,000 worth of playground equipment to. That was one of the most heart-wrenching experiences I’ve ever gone through. This orphanage had so many babies in cribs together and a huge percentage had HIV and AIDS because they used the same needles for everything. That started bringing along my strong social justice component and humanitarian view of things.

“I was in Romania for their first democratic election after the fall of the dictatorship. The celebration that night should be mandatory viewing for every American. You don’t understand what you have until you see somebody getting it for the first time.

“All through the Peace Corps, I kept my performing desire alive. In Romania, I sang the national anthem at our swearing-in ceremony and the Romanian officials were very impressed. A few months later, Hillary Clinton was coming and the European detachment of the Air Force Band was playing for her. They invited me to sing for her. It was on Romanian TV, a big deal. For the next week, every time I went somewhere, people would come up to me and want my autograph like I was a big star.

“I started out in the Peace Corps helping nonprofit organizations raise funds and connect with the community. Through that, I got into training workshops and into teaching courses in colleges. I loved teaching. When I got back from the Peace Corps, I went to school full time and worked full time so I could get through school as quickly as possible. In about five years, I finished two master’s degrees and a doctorate.

“Between the master’s and doctorate, I got the opportunity to teach in China for two years. I lived in Guangzhou, taught in the university and lived on campus.

“They had a weekly television program, This Week in Guangzhou, the only English program offered on Chinese TV. The host quit, and they invited me to be the host. About six months later, Portugal was giving the island of Macao back to China. Communist China Television made a big movie, “The Story of Macao,” with about 20 episodes. It was directed by a famous Chinese director and starred a lot of Chinese movie stars.

“I was invited to have a featured role, the only foreigner. I played a ruthless construction company owner from England. Here’s where my Light Opera Guild background came in handy. I couldn’t understand what anybody was saying, so I never knew when it was time to give my line. I developed a camaraderie with the other actors. I could tell by their nods and glances that it was time for my line. I would give my line then try to act interested in whatever was going on.

“As we traveled around filming this movie, lots of natives recognized the Chinese movie stars. They assumed I was an American movie star because I was with them. Hordes of people would come running up to have their pictures taken with me and get autographs and touch and pull. On a couple of occasions, the mob was so big, they had to send in the police to take me out of there.

“I was in China when I decided I needed my doctorate, so I came back to finish a doctorate in organizational behavior and started teaching here. Three years ago, I became director of the MBA program and chair of the graduate programs in business.

“My father and two of my aunts went to school here, so I’ve had a connection to UC my entire life. I have a tremendous respect for where this university is going, and I wanted to be a part of that. But this opportunity came up in Egypt, an endowed chair in international leadership at the American University in Cairo and director of their Leadership Training Institute.
- advertisement -

“Aside from Antarctica, the African continent was the only one I hadn’t lived on and taught on, and I especially wanted to go to Egypt, so it’s the ideal job in the ideal place. The university is a gorgeous building and has about 7,000 students, so it’s not like I’m going to an undeveloped part of China.

“When I told my family I wasn’t going to be at UC next year, they asked me where I was going this time. They knew I wasn’t going to be staying in the United States. There’s something about immersing yourself in another culture. It allows you to see every issue going on in the world from other people’s perspectives. It makes me a better teacher. In any classroom, a lot of cultures are represented. I reach those students because I understand their culture.

“I’ve had a ball every place I’ve been. I have that international bug. Every time I came back home, my goal was to somehow prepare myself for the next adventure.

“There’s the old adage that life begins at 40. It truly did for me. I have to consciously remind myself that I am 46 and not 20 because I feel like my life just started 10 or 15 years ago.”

This story has been posted in the following forums: : Headlines; COS - Nicaragua; COS - Romania; University Education