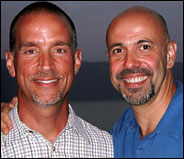 Donald Gardenier was a Peace Corps volunteer from 1983 to 1985 in Pilar, Paraguay, where he worked on a cooperative business development project with the town's fishermen.

Donald Gardenier and Thomas Arthur McGillis were married on Monday by Lucette Saint-Amour, a deputy clerk of the Superior Court of Quebec, at the Palais de Justice in Montreal. Yesterday, the Rev. Michael F. Delaney, an Episcopal priest, led another ceremony at the couple's weekend house in Claverack, N.Y.

Mr. Gardenier (above, left) is 46. He is a nurse practitioner at Internal Medicine Associates of Mount Sinai Medical Center, a group medical practice, and at the Harlem United Community AIDS Center, both in New York. He graduated cum laude from New York University and received a master's degree in public administration from N.Y.U. and a master's degree in nursing from Pace University. He was a Peace Corps volunteer from 1983 to 1985 in Pilar, Paraguay, where he worked on a cooperative business development project with the town's fishermen. He is the son of Alida Gardenier of Hawthorne, N.J., and the late Adrian Gardenier. His father was a master plumber in the maintenance department at the New Jersey Institute of Technology in Newark.

Mr. McGillis, 48, is the vice president for human resources at Find/SVP, a New York company that provides research and advisory services to businesses. He graduated from Richard Stockton State College in Pomona, N.J., and received an M.B.A. from Baruch College. He is the son of the late Anne V. McGillis and the late William A. McGillis, who lived in Bayonne, N.J. His father was a vocational teacher at Bayonne High School.

The couple met in 1990, when both were members of the New York City Gay Men's Chorus. Mr. McGillis is the principal sign language interpreter for the organization, a position he has held since 1988, and Mr. Gardenier was a tenor.

This story has been posted in the following forums: : Headlines; COS - Paraguay; Marriage; Gay Issues