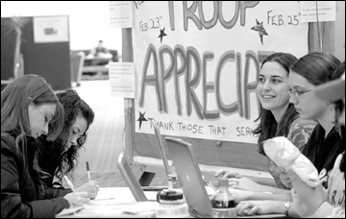 "Regardless of our politics, these men and women are sitting in harm's way, and we're sitting comfortably at home under their protection. Most Americans have not been asked to sacrifice anything for this war."

Deeds that truly support our troops

Bumper stickers entertain me while I drive. Even if I totally disagree with the sticker, I love a well-written, original one. The message tells me about the drivers' travels, their politics, their wit, their hopes, their cynicism, their activism.

That's why I have been fascinated and a bit perplexed by the proliferation of the "Support Our Troops" magnets on vehicles. I am especially bemused by the irony when they appear on the back of a gas-guzzling SUV. I wonder how many of these people actually do something to help our troops.

For me, deeds, not words, define the person. So now and again, I'll ask people who display these magnets what they do to support the troops. I often get a surprised or embarrassed look. Their "support" usually amounts to a 99-cent sticker purchased from a discount store.

Really supporting our troops is surprisingly easy. Most units have family organizations that send packages to their men and women fighting overseas. They need supplies and some serious cash to mail packages. You can donate airline miles or phone cards or help out a family with a loved one serving overseas.

I originally started sending letters and packages when a co-worker's unit was called up before the Iraq war started. Then I found www.booksforsoldiers.com, which connects people to soldiers who could use a boost. I have written to nearly a hundred soldiers, heard from about half of them and regularly correspond with about a dozen at a time.

I've happily seen many come home and be reunited with their families. Others are on their second or third tours. I've received cards and e-mails of gratitude from their families. Some of the soldiers I now call friend.

One did not make it. I scan the names released by the Pentagon each week with trepidation.

Some of my pen pals are young, overwhelmed 18-year-olds. And there are the salty guys who've seen more than one war. The women share great tales of their testosterone-driven worlds. Some barely finished high school, and others have advanced degrees. I write to privates and decorated officers.

And they all miss home. Terribly.

All of them appreciate the good thoughts and prayers. Every single one has said, "I'm glad someone back home thinks of me."

Having lived overseas, including a stint in the Peace Corps, I know how lonely mail day can be. Soldiers prefer to hear from the "real" world regularly, not just at Christmas.

When I offer to send a box, most soldiers are shy to ask for anything. They want little things like Lucky Charms, a good razor, Twinkies, decent coffee and spices. They go crazy over movies and books.

These men and women share with their unit. They swap movies and books and pass them on to the people who replace them. Many of the soldiers ask for candy, stickers and school supplies to hand out to Iraqi and Afghan children.

Their letters are powerful. Their photos humble me or make me cry. Iraqi and Afghan currency adorns my refrigerator. These men and women sometimes only have time to write a short note, but there is often hope, fear, frustration, gratitude and loneliness packed into a few lines. I am almost always compelled to write or e-mail right back.

Regardless of our politics, these men and women are sitting in harm's way, and we're sitting comfortably at home under their protection. Most Americans have not been asked to sacrifice anything for this war.

Although I really don't want to think about how much I spend on these boxes, I think I can bypass a dinner out or a new pair of shoes to give the soldiers a piece of home. Even on a tight budget, most people can afford a stamp or find time to dash off an e-mail.

Most of the soldiers don't really care about the packages. Commanders tell me that just getting a postcard with their name on it can bring tears to the eyes of a weary soldier.

So if you really want to support our troops, skip the magnet and get involved.

Diane Hardy is an educator in the Milwaukee Public Schools. Her e-mail address is talktodianehardy@yahoo.com

This story has been posted in the following forums: : Headlines; COS - Moldova; Iraq; Service