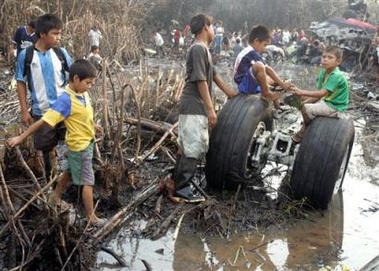 Hundreds of scavengers combed through the wreckage of a Peruvian airliner Thursday, carrying away scrap metal, passengers' belongings and electronic equipment that could have offered clues into what caused the crash that left at least 37 dead.

Caption: A group of boys play in a part of the wreckage of the TANS Peru airliner that crashed Tuesday, in Pucallpa, Peru on Thursday, Aug. 25, 2005. The airliner carrying 98 people crashed while making an emergency landing on a jungle highway Tuesday, killing 31 people. At least 57 people escaped the crash in what one aviation expert Wednesday called 'a miracle.' (AP Photo/Martin Mejia)

Hundreds of scavengers combed through the wreckage of a Peruvian airliner Thursday, carrying away scrap metal, passengers' belongings and electronic equipment that could have offered clues into what caused the crash that left at least 37 dead.

Dozens of air force soldiers stood by and watched as residents of this Amazon jungle town dug through debris of the Boeing 737-200 that crashed Tuesday, looking for anything of value.

"I'm collecting this for my house to hang my laundry," said Rosario Dahua, 47, as she tugged at a tangle of heavy black wires next to a partially submerged turbine jet motor wedged in the water and mud.

Aviation experts warned the missing parts could have yielded important crash details, and one compared the scavenging to contamination of a crime scene.

The airline has said wind shear likely forced the emergency landing and that the pilot's actions saved the lives of at least 58 people on board. But an aviation expert suggested pilot error was to blame. Officials will study both claims as they investigate the crash.

The airliner was carrying 98 people, including six crew members, on a domestic flight from the Peruvian capital of Lima to the Amazon city of Pucallpa when it crash-landed Tuesday in a marsh a few miles from the Pucallpa airport, company spokesman Jorge Belevan said Wednesday.

Belevan said three missing people might include survivors from Pucallpa who returned to their homes after the crash without receiving medical assistance.

Air force Cmdr. William Rodriguez, in charge of security at the site, said Thursday he did not believe the people would impede the work of civil aviation investigators who had not yet arrived.

"We are verifying that all the bodies have really been recovered," Rodriguez said. "So if these people want to search for things, perhaps they'll encounter another body."

A "black box" hasn't been recovered. Officials said the flight voice recorder has been found but not the data recorder.

Seated behind Rodriguez in a pickup truck parked near the crash site was another officer who did not provide his name. He said that if people find the missing recorder "they'll turn it in."

Juan Berte, 33, said he had no idea what the electronic equipment he carted away was and said he was not concerned about inadvertently removing key evidence.

"Look, we're taking stuff to keep, perhaps in the house, to look at like a toy," he said, holding a cracked insert panel with a blue numeric dial. A warning label on top of the component said: "Electrostatic Sensitive" and "Special handling required."

Wrapped in a piece of black burlap, Berte also carried another electronic component that said "Sperry Flight Systems." When an Associated Press reporter asked to inspect the item, Berte became nervous and ran away.

U.S. aviation expert Paul Czysz criticized the removal of the two parts, saying that they could have offered investigators important details about the accident.

"It could be the electronics. It could be some of the gyroscopic packages," he said, adding that it could have shown investigators the autopilot's last position when it crashed.

He said the insert panel was probably used to control the aircraft.

"A lot of the solid state electronics are very sensitive to electrostatics, because they're high voltage and they spark," he said.

Hernan Vargas, an aeronautical engineer, on Thursday likened removal of parts from the crash site to contaminating a police murder scene.

"There has been much manipulation of the disaster (site) since even yesterday and we have been able to see in the images that they are moving parts," he told Channel 5 television.

That may be the reason the "black box" had not been found yet, he said.

The leased Boeing 737-200 that crashed Tuesday was built in 1983, according to Belevan, who credited pilot Octavio Perez Palma, who was killed in the crash, for saving so many lives. The airline said wind shear Tuesday afternoon may have forced the emergency landing.

Perez Palma began his approach to the airport in torrential rains and strong winds, which passengers said began rocking the plane. About four miles from the airstrip he attempted to make an emergency landing, TANS said.

Perez Palma apparently aimed for the marsh to soften the impact, but the aircraft broke apart in the landing, strewing pieces of fuselage as it skidded over the boggy ground.

But Victor Girao, a former president of Peru's Association of Pilots, said the crash was caused by pilot error. Perez Palma's 20 years of experience were primarily spent as a fighter pilot, he said.

He said Perez Palma was flying too close to the ground while making the approach to the airport from four miles out, making it difficult to control the aircraft against wind shear.

This story has been posted in the following forums: : Headlines; COS - Bolivia; COS - Peru