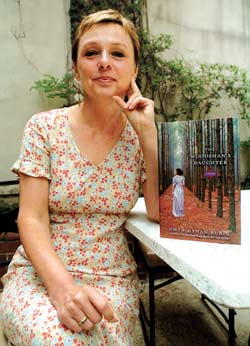 Author draws on past to write 'Woodsman's Daughter'

:The Woodsman’s Daughter" author Gwyn Hyman Rubio, who grew up in Cordele

Gwyn Hyman Rubio remembers sitting on her grandmother's porch and hearing family stories told while she drank tea so sweet it made her mouth feel like it was coated in sugar. Her grandmother and father were the primary storytellers, but every relative had something to say.

"I think all writers draw on what they know and what they've lived or they've heard - family myths," Rubio said.

The author, who grew up in the south Georgia town of Cordele, took some of those family stories and worked them into her novel "The Woodsman's Daughter" (Viking, $24.95).

"You never know where the truth is," Rubio said. "Everything has been embellished as it is passed down through the generations."

Though it was somewhat inspired by family tales, Rubio's novel is fiction. "The Woodsman's Daughter," which opens in 1894, follows Dalia Miller as she grows up in south Georgia and begins a family of her own.

Rubio, however, did not plan to become an author. In fact, she avoided writing because she saw how it affected her father, Mac Hyman. He wrote "No Time for Sergeants," which was published in 1954, when he was 31.

Millions of copies were sold. "No Time for Sergeants" was adapted into a Broadway play and a 1958 movie starring Andy Griffith.

But after the success of "No Time for Sergeants," Rubio's father developed writer's block and never wrote again.

"[He] died tragically at 39 of a massive coronary, and I blamed writing for his death. Because of my father and his experience, I ran from writing most of my life," Rubio said.

After attending college at Florida State University, she joined the Peace Corps and worked in Costa Rica and central America for three years.

When she completed her service in the Peace Corps, she and her husband toured Europe and Africa for several months. Then they came back to the United States and settled in Kentucky, where they still live.

When Rubio was 26, a publisher showed interest in her work, but the deal fell through. She didn't get serious about writing until her mid-30s, when she worked on a master's degree in creative writing at Warren Wilson College in North Carolina.

She wrote for a decade before her first novel, "Icy Sparks" was published in 1998. The book was well received by critics, but sales were modest - until Rubio received a very memorable phone call from Oprah Winfrey in 2001. "Icy Sparks" was selected for Oprah's Book Club and sales of the novel suddenly increased.

Rubio continued to write, discarding a second novel before beginning "The Woodsman's Daughter." Writing the novel took four years, in part because of what happened to her father.

"This has been particularly traumatic for me, trying to come out with a second book. I cannot begin to try to describe some of the agony of it," Rubio said.

Her editor provided needed encouragement, but ultimately, it was the process of writing that motivated Rubio.

"I would feel myself coming apart, but I knew no matter how tough this story [was] to tell, I found sanity in writing these pages," Rubio said. "It would bring me together and keep me glued. I find great solace in writing in that way."

Rubio began "The Woodsman's Daughter" as a 70-page draft and knew her story was set in Georgia. Still, she wasn't sure exactly what the background of the book would be. A family friend suggested including the turpentine industry.

"That became the answer for me. When I found the background, then the novel, the characters, everything seemed to fit," Rubio said.

Turpentine was produced on the coastal plains of Georgia, where longleaf pine trees grew. Though the industry was dying when Rubio was a girl, some turpentine was still produced near her home.

"I remember the loud smell of turpentine & You could smell the gum because you tap the longleaf pine for the gum the same way you tap a maple tree for syrup," Rubio said.

The process of making turpentine also produces pitch and tar, which were widely used in the shipbuilding industry.

"At one time, Savannah, Georgia was the largest exporter of turpentine products in the world," Rubio said.

In "The Woodsman's Daughter," Dalia's father is a turpentine farmer with an adventurous spirit and a secret that will soon be discovered. The first section tells his story.

The second focuses on Dalia and the last section is about her daughter, Clara Nell.

In the story, Dalia makes a lot of wrong choices. "She's not a bad woman, she's just misguided. And I'm always rooting for her. Even at her worst, I love Dalia," Rubio said.

Come to the next meeting of the Gwinnett Daily Post Book Club to talk about "The Woodsman's Daughter" by Gwyn Hyman Rubio. Set in south Georgia in the late 1800s, the story follows the life of Dalia Miller, who is the daughter of a turpentine farmer.

This story has been posted in the following forums: : Headlines; COS - Costa Rica; Writing - Costa Rica