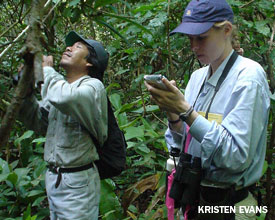 Bolivia is a laboratory for an ambitious project to transform uncontrolled and illegal logging in the Amazon forests into a regulated, sustainably operated industry. The objective is twofold: keep the forests and their biodiversity intact, and create a viable forestry industry that provides Bolivians with desperately needed jobs.


We stand with our necks doubled back and aching, focusing our binoculars on the figures moving about high in the branches of a fig tree: A mother spider monkey splits open a ripe fig and squeezes out the sweet meat, while her little son tosses another fruit around, playfully attempting to imitate his mom. Swedish scientist Annika Felton takes notes. Then she explains, “Fig trees are key species for spider monkeys. This fig tree and many others in their home range are slated to be logged. What will happen to the monkeys? We don’t know yet.”

Annika has studied orangutans in Borneo and titi monkeys in Madidi National Park in Bolivia. Now pursuing her doctorate from Australian National University, she is dedicating over a year of field research, funded by a grant from the Wildlife Conservation Society, to answer this question in the Guarayos forests of Bolivia’s Amazon Basin. Her study site is La Chonta, a private forestry concession that spans 250,000 acres of tropical wilderness about seven hours north by road from the nearest major city, Santa Cruz. Recently, Annika invited me to help her for a month as a volunteer. At times the experience was grueling—but always an adventure. Annika has had to ford flooded streams and brave raging forest fires along rough logging roads to follow the spider monkeys deep into the forest.

This morning we stumbled out of our tents at 4:00 A.M. for a hurried breakfast by candlelight. Then we hiked for an hour to reach the monkeys we had observed in the fig tree last night, before they would begin yawning and stretching to start their day. If we arrived late, the monkeys would already be gone, and it could take hours to find them again.

Annika’s spider monkey study community consists of an extended family with 50 members, who range over about two square miles of forest. She has mapped their territory and slashed paths through the thick vegetation in a grid pattern to allow her team to trail the monkeys on foot while they leap through the treetops. It has taken many months to identify and name her subjects and put together a family album with drawings of their faces and notes about their distinctive markings.

The monkeys had to become accustomed to having a constant voyeur, because Annika intended to do what other primatologists warned her could not be done: follow one monkey from dawn to dusk to compile a detailed activity profile. Because spider monkeys are dark-furred, fast, and hard to identify high in the canopy, other researchers have opted to track several animals at once or collect data only at set time intervals. But with the help of an experienced field assistant, José Chuvina, Annika hardly ever fails in her pursuit.

Spider monkeys form what is known as a fission-fusion society, which means that a family breaks into smaller subgroups to travel and forage. This adds to the challenge, particularly when subgroups meet, merge, and separate in a popular feeding tree. Every 15 minutes, Annika must scan the collective subgroup and jot down behavioral data to better understand this social dynamic.

For today’s work, I am loaded with all sorts of paraphernalia: GPS (Global Positioning System) device to map our movements, distance meter to measure the heights of trees, measuring tape to find their girth, tree tags, binoculars, hand-held computer, compass, waterproof notebook, walkie-talkie, feces sample bags, urine test sticks, and a machete. I look like a coat rack of instruments, each of which is decorated with bright pink flagging tape in case it falls onto the dark forest floor.

Once we find the monkeys, Annika decides who will be the “animal of the day.” Should we follow Billy, the big-boned dominant male with the scruffy tuft of hair jutting from the top of his head? Certainly we’d be better off not to choose one of the “hyperactive” juveniles executing flips from a great vine. Like trapeze artists silhouetted against the dawn sky, the pair create a two-tailed knot as they swing each other through the air.

Then Annika spots Kajsa, a mother with a daughter not yet a year old named Kalle. We’ll keep up with Kajsa, recording where and with whom she travels, what she eats, how long she naps, etc. An invasion of primate privacy? Perhaps. But Annika needs this information to understand the monkeys’ dependence on the trees to be logged.

Bolivia is a laboratory for an ambitious project to transform uncontrolled and illegal logging in the Amazon forests into a regulated, sustainably operated industry. The objective is twofold: keep the forests and their biodiversity intact, and create a viable forestry industry that provides Bolivians with desperately needed jobs.

As the sun warms the treetops, the monkeys leave their sleeping tree to forage farther afield. Their first stop is a nearby fig tree, another giant of the forest. Buttress roots anchor its tremendous trunk, which measures six feet in diameter and supports spreading branches that break out of the canopy 100 feet above our heads. The monkeys clamber over the limbs, the adults busy picking and eating figs while their youngsters play. Mothers keep close tabs on their little ones, never letting them wander more than a few feet away. They also have a clever way of helping them travel through the canopy: The mother grabs branches of adjoining trees to form a bridge with her body, letting her youngster scramble across.

We settle ourselves among the ferns below the fig to observe the action. All around us, fruits shaken loose by munching monkeys pelt the leaf-padded forest floor. We keep our eyes on Kajsa. Oops, something besides fruit falls from the tree onto Annika’s long blond hair. “Monkey poo,” she announces. “That’s good luck.” She picks it out of her hair and examines it for seeds.

It’s a great day for seeing other wildlife, too. Early on, we startle a tapir that bursts onto our path and swings its head to look at us before plunging back into the brush. It’s easily the size of a small cow. “That’s a young one,” Annika tells us. “It’s big, but we’ve seen much larger.”

Renna Short, another volunteer, picks up an eight-foot snakeskin and tucks it into a sample bag to take back to camp to identify. She points out a collared trogon perched on a branch. The feathers of this brilliantly plumed relative of the quetzal glow green and red, and black and white stripes decorate its tail.

We also bump into another family of monkeys—capuchins, smaller than spider monkeys, with gold, brown, and white fur. They are curious and vocal, chattering like excited children as they venture lower down the tree branches to get a good look at us.

When the spider monkeys finish feeding, the chase is on. Annika takes off after them, striding on her long legs while keeping her binoculars trained on the animals. I catch glimpses of her ponytail disappearing in the brush as I struggle to keep up. This is the rhythm of the day—quiet watching punctuated with frantic pursuit. Only when the sunlight fades do the monkeys settle down for the night in their bedtime tree. Then we trudge back to the camp for a candlelit dinner before collapsing in our sleeping bags.

Annika overcame many obstacles to make this research project a reality. She spent several years planning and writing grant proposals before she even started the fieldwork. Soon after arriving in Bolivia, she realized that having a base close to her study site was essential. With the help of more volunteers and her husband, Adam Felton, who is studying logging’s impact on birds for his PhD, a camp was built and a 30-foot-deep well dug to supply water during the dry season. And so we live in rustic luxury in the middle of the rain forest, with a lodge, kitchen, latrine, shower cabin, and tent sites. We take turns cooking huge, starchy meals to energize us for the long days.

The La Chonta study site has been certified by the Forest Stewardship Council (FSC), an international organization that recognizes companies that comply with certain standards to reduce the impacts of logging. The goal is to sustain healthy forests that benefit people while maintaining biodiversity and a sufficiently undisturbed habitat for wildlife. And that’s what Annika is trying to figure out: Are the FSC rules sufficient to preserve biodiversity, as they promise to do?

“When I was designing this project, I knew that I had to do research that would directly help policymakers,” Annika tells me. “How can people make good decisions about saving biodiversity if they don’t have good information?”

Kristen Evans was a Peace Corps volunteer for two years in Guarayos, next door to La Chonta, working with indigenous communities to help them manage their forests. Now she works with forest-dependent communities in the northern Bolivian Amazon with CIFOR, the Center for International Forestry Research.

This story has been posted in the following forums: : Headlines; COS - Bolivia; Wildlife; Conservation; Monkeys