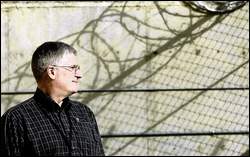 As a leader of "Home for Good in Oregon," Cayton works with a statewide network of nearly 50 community chaplains and coordinators who help released inmates fashion crime-free lives. Since the innovative faith-based program began three years ago, it has linked more than 300 offenders to jobs, housing, churches, mentoring and more.

Salem prison chaplain has faith that he can keep inmates outside

He finds success integrating high-risk felons back into society

Tim Cayton has hitchhiked across the Sahara Desert, studied in Paris, roamed cellblocks at San Quentin prison in California and served as the U.S. government's top specialist on French law.

So what's he doing in Salem?

Working with an army of prison and community chaplains to keep you safe.

Cayton, 59, the re-entry chaplain for the Oregon Department of Corrections, is building an award-winning program that helps high-risk felons integrate back into society after they finish their prison sentences.

He recently was honored as the agency's employee of the year.

As a leader of "Home for Good in Oregon," Cayton works with a statewide network of nearly 50 community chaplains and coordinators who help released inmates fashion crime-free lives.

Since the innovative faith-based program began three years ago, it has linked more than 300 offenders to jobs, housing, churches, mentoring and more.

"We'll have safer communities," he said.

His optimistic analysis has a familiar ring within the ranks of chaplains he recruited to make up the "Home for Good" coalition.

"This guy believes in what he's doing. If you sit down and talk to him for more than five minutes, you'll know he's absolutely sold on this," said Wayne Crowder of Salem, a regional chaplain.

Cayton persuaded Crowder to join "Home for Good" about two years ago. Now, he's sold on the program, too.

"We're finding a lot of success because people are getting some help as soon as they get out of prison," Crowder said. "They're not just left on their own. That's a big plus."

Whether the program cuts rates of repeat crime won't be known until extensive data are collected for several more years. But Crowder sees promising results in the six-county region he oversees: Marion, Polk, Yamhill, Linn, Benton and Lincoln counties.

"I have 35 (released offenders) right now that have been dispatched between the six counties that I'm working with," he said. "So far, I have not gotten any callback saying anyone has went back in."

"I can tell you from my personal experience, the offenders I have been involved with, most all of them are making it," he said.

Hinrichs described Cayton as a passionate catalyst for change.

Famed medical missionary Albert Schweitzer is his hero. "Christ and Culture" is his favorite book.

Fresh out of college, Cayton served from 1969-71 as a Peace Corps volunteer in Burkina, Faso, West Africa. He became fluent in French and a local African dialect.

The downside of his two-year stint in the Peace Corps: "Got hepatitis, nearly died out in the bush," he said.

When healthy, Cayton traveled extensively in Africa, including a hitchhiking trek across the Sahara Desert.

Academic pursuits came on the heels of his African odyssey. In France, Cayton studied international law at the University of Paris. Advanced studies followed at the International Court of Justice at The Hague, Netherlands, and in Brussels, Belgium, where he received instruction from former U.S. Secretary of State Dean Rusk.

In the mid-1970s, Cayton's overseas legal training led to a government position in Washington, D.C. He was hired by the Library of Congress' International Law Division to serve as the U.S. government's legal specialist on French and international law.

Cayton crafted legal opinions for the U.S. Supreme Court, government agencies and private attorneys. It was fascinating work yet emotionally unsatisfying, he said, and he resigned after less than two years.

"This isn't providing the meaning and satisfaction in life that I was really looking for," Cayton said, recounting his discontent. "It was fascinating kinds of cases, but it was very detached from people."

Cayton, the Minnesota-born son of a Presbyterian minister, returned to his roots. After leaving the nation's capital, he enrolled at a seminary in St. Paul, Minn.

"Walking through the doors of the seminary, I had the experience of feeling like I was coming home," he said. "It was like, this is where I'm supposed to be."

Cayton's next stop came at a seminary in San Francisco. He earned a Master of Divinity degree in 1980 and a doctorate degree in theology in 1987.

"Just going up and down the rows and talking to people through the bars," he said. "It was a gratifying experience."

During his years in San Francisco, Cayton became a leader in the emerging field of family mediation. Coining the term "pastoral mediation," he built a solo practice into one of the largest mediation firms in the Bay Area.

By his count, Cayton mediated 1,500 divorces. His experience prompted him to write a book titled "Divorcing with Dignity," promoting a conflict-reducing alternative to the traditional divorce system that often pits spouses against each other.

Asked how many of his clients kept their dignity while splitting up, Cayton laughed and said he didn't keep track. But he still thinks mediation served them well.

"I can very safely say every one of them left with some form of relationship," he said. "It may have been minimal in some cases, but at least they were communicating and working together."

Another twist in Cayton's life came in 1996, when he was sent by the Presbyterian Church to Nairobi, Kenya. From Kenya, he moved to the war-torn African country of Burundi, where he worked for a faith-based international relief and development agency.

Cayton returned to the U.S. in 2001. That's when the Oregon Department of Corrections hired him to become the agency's first full-time re-entry chaplain.

Cayton is based in Salem at the Corrections Department headquarters along Center Street NE. In his spare time, he is a hobby farmer, tending to a small collection of chickens, horses and assorted other animals.

Cayton has two grown children from a previous marriage. He now lives on a small farm with his pregnant wife, Nduta, a Kenyan national, and their 9-year-old son, Jordan, adopted from Kenya. Nduta is due to give birth in late October.

Cayton sometimes goes inside Oregon's 12,300-inmate prison system to teach a Swahili-language class, supervise a chapel service or have a heart-to-heart chat with an inmate.

But the bulk of his work occurs outside prison walls, building connections for "Home for Good."

Cayton's work is drawing attention and praise. The program garnered a 2005 award of excellence from the American Correctional Chaplains Association.

"While HGO is, in many ways still in its infancy, the program has demonstrated the ability to mobilize and inspire both community members and correctional professionals who are seeking to increase public safety in Oregon," he wrote.

Cayton said he regards program and personal recognition as a work-related bonus.

"It's working with a part of society that very few people have an opportunity to work with -- or want to," he said. "So it's a remarkable privilege to be able to do that."

This story has been posted in the following forums: : Headlines; COS - Burkina Faso; Religion; Prison; Crime