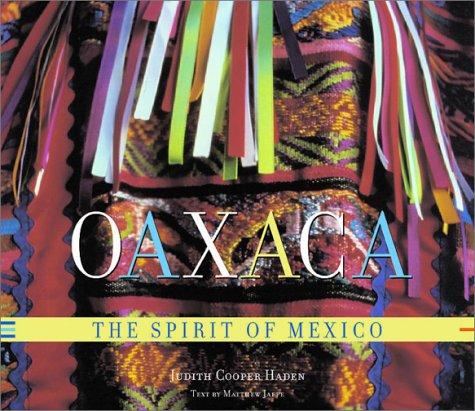 "My heart now really lies with maintenance of cultural traditions and giving these people honor and respect in print so that possibly the younger generation will see it as an enviable pursuit - especially if the fair-trade concept persists and people receive a good wage for their product."

IN TOUCH WITH THE INDIGENOUS
Sep 9, 2005 - The Santa Fe New Mexican

Guelaguetza, the annual dance festival in Oaxaca, Mexico, is rich in tradition and gorgeously colorful - a dream event for a photographer with a special interest in culture. "It's a huge festival held in July, and the best dancers from all regions of the state of Oaxaca come in the most remarkable finery and perform traditional dances," said photographer Judith Cooper Haden. "It goes on for a week, and probably hundreds of thousands of Mexicans attend. Their pride in cultural traditions is very strong."

A new exhibit at the historic Bond House in Espanola features Haden's vivid pictures of Guelaguetza and of other, less animated (though rarely less colorful) scenes from the southern Mexico state. The show includes series on a textile artist named Josefina and a basketweaver named Candelaria, both of whom have died since Haden photographed them between 1997 and 2001. "Because I had a folk-art store and a women's-apparel store, I traveled there to make purchases, and I met an American tour guide who said someone needs to document these older folk artists, who are in their 90s, and no one seems to be picking up the torch," she said, explaining that the young people of the region would rather pursue interests other than traditional crafts.

"My heart now really lies with maintenance of cultural traditions and giving these people honor and respect in print so that possibly the younger generation will see it as an enviable pursuit - especially if the fair-trade concept persists and people receive a good wage for their product."

Haden's interest in Central America dates back to the two years she spent working with the Peace Corps in El Salvador in the 1960s. The service followed her college career, during which she earned a bachelor's degree in Spanish and Latin American studies at the University of Washington in Seattle.

In repeat visits she has found that the people of Oaxaca are adept at myriad crafts, specific to each village and town and usually based on centuries-old traditions. They include pottery, appliqued work in clay, and carpets with woven designs based on friezes found in the area's pre-Columbian ruins.

"There are also several towns where people do wood carvings of little animals that are wildly phantasmagorical. It's a very high art form, but the thing that fascinates me particularly is the similarity to what the Spanish brought to northern New Mexico," she said. "They brought the same kind of sheep and the same looms, so at Ortega's in Chimay you'll see the same style of weaving and many of the same patterns as you'll see at Teotitlan del Valle in Oaxaca."

Another locale follows a black-pottery tradition started by Dona Rosa Real de Nieto, whose work was contemporaneous with and similar to the black-pottery innovation of San Ildefonso's Maria Martinez.

Her participation in a travel article in Sunset magazine was a professional breakthrough for Haden. It began with a casual conversation at the U.S.-Mexico border and resulted in a successful collaboration for a book. "Sunset did a story on Oaxaca; that's how I met my writer, Matt Jaffe," she recalled. "I was standing behind him in the immigration line going into Mexico. We were stuck there for a couple of hours, and we chatted, and I found out that he was doing a story on Oaxaca, but he didn't speak Spanish and he didn't have a photographer. He ended up using my pictures, and then I invited him to be the writer in my book."

Oaxaca: The Spirit of Mexico (Artisan Press, 2002) features more than 200 of Haden's color photographs of Oaxaca, including the ruins of Monte Albn - the ancient capital of the Zapotec people and a UNESCO World Heritage site. Among Haden's other publication credits are cover shots for the last two editions of Oaxaca in the Moon Travel Handbooks series.

For 20 years Haden ran Take 2, a women's consignment shop and photo gallery, and her folk-art shop, Casita, both in Seattle. She still has the latter, though it is no longer operated as a store. She also is involved in the Oaxaca-based organization El Crculo de Mujeres, which works in the areas of social justice, midwifery, and women's health.

Haden studied with Pat O'Hara, Lisl Dennis, Nevada Weir, Judy Dater, and Borges, among others, before she began exhibiting her travel photography in and around Seattle. Her awards include Mexico's Lente de Plata (Silver Lens) trophy.

Not too long ago the photographer switched from using a Canon EOS film camera to a Canon digital camera. "It's a nightmare," she said. "My camera gets dusty while I'm spending all my time at the computer processing, storing, and backing up my images. I used to get my slides, spent an hour on the light table editing, and that was it.

"I dropped my hard drive when I got back from Kenya and Ethiopia last year and lost 90 percent of my shots because there wasn't enough electricity in the villages to back up everything."

Haden recently bought a house in La Mesilla, where some old Peace Corps friends also live. "This is such a great home," she said. "I feel so comfortable here because of the importance of crafts and indigenous product in this area."

Later in 2005 Haden plans to return to Oaxaca, where she will concentrate on photographing local weaving and textile traditions for a new book.

Oaxaca: The Spirit of Mexico, photographs by Judith Cooper Haden

This story has been posted in the following forums: : Events; Headlines; COS - El Salvador; COS - Mexico; Photography; Dance