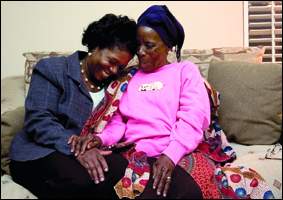 Jamel, 22, was born in Liberia. She is the daughter of a Peace Corps volunteer and a Liberian woman who married and moved to Colorado when she was 1 year old. For a long time, Jamel never knew the details of her family's experience in Liberia. She tried to get stories from her mother, Elizabeth Russell, who tried not to upset her daughter with gory details

Konwedi Sigah, 67, still hears the children's screams. She sees the soldiers marching and remembers stepping over the dead bodies.

Caption: Elizabeth Russell laughs with her mother, Konwedi Sigah, as they sit in their Aurora home. Russell fled her native Liberia when she was 23 years old and came to the United States with her husband and one daughter, Jamel Russell, now a senior at the University of Northern Colorado. Sigah’s home was burned down in the war, yet she is hoping the political climate will be more stable after the elections so she can return. Photo: HILLARY WHEAT / wheat@greeleytrib.com

In her dreams, she relives gathering her family and bolting into the bush where the forests are thick and easier to hide in.

She had heard rumors the rebels were coming and some people had gone missing, but that didn't prepare her for the reality. The rebels flooded River Cess, Liberia, looting, killing and burning along the way. The entire village ran away together.

Jamel Russell, a senior at the University of Northern Colorado, sat on the steps of her family's Aurora home last week, captivated by her grandmother's story. She has heard the words before, but they have a different effect on her now.

"I used to get really depressed at first and shut down," Jamel said. "Now when they tell their stories, it is empowering to me. It creates more of a drive."

Jamel, 22, was born in Liberia. She is the daughter of a Peace Corps volunteer and a Liberian woman who married and moved to Colorado when she was 1 year old. For a long time, Jamel never knew the details of her family's experience in Liberia. She tried to get stories from her mother, Elizabeth Russell, who tried not to upset her daughter with gory details.

Elizabeth opened up more as Jamel got older. And as Jamel's interest grew while attending UNC, she kept herself informed about events in Liberia.

This week, their family and the world will be watching the news out of Liberia. On Tuesday, the west African country will see its first elections since a 14-year civil war ended. The outcome will determine whether Jamel's grandmother will go back in December. Sigah makes it clear she wants to return in spite of horrific memories and nightmares of the Liberia she escaped.

Sigah tells about running into the bush and, when she looked back, seeing their home engulfed in flames by the rebels. Jamel's aunt, who was a nurse, was decapitated. Sigah said she was stubborn and wouldn't leave River Cess because people were suffering and had no one to care for them. She was killed for caring for someone not from a rebel tribe.

She was never even buried. Her body was left to decay like Sigah's spirit as they fled for their lives.

Where were they running to anyway? There was nowhere to hide. Monrovia, the capital city, was just as bad and crowded with people who fled from the villages. People camped around the U.S. Embassy looking for safety.

And it took days to get there. No one could use the main roads because they were controlled by rebels.

"People were drowning in the water," Sigah said in her native tongue. They stepped over dead bodies and brushed aside feces to drink from a river stream. One of her daughters nearly sank in quicksand.

When the civil war erupted, Elizabeth was living in Fort Collins and had no idea if her family had survived the siege of River Cess. She and her husband, Primus Russell, left Liberia in 1984 -- five years before the rebellion -- for fear the rebels would murder Primus, her African-American husband. Liberia was founded in the 1800s by freed slaves from the United States. But tension mounted between the indigenous Africans and the freed slaves who are called Americo-Liberians.

"The returnees became 'civilized' and those left behind 'barbarians,' " said Kelechi Kalu, political science professor and Africa expert at UNC. "Liberia was a time bomb waiting to explode as a direct consequence of slavery and returning Liberians."

Coup after coup left an estimated 200,000 Liberians dead. Elizabeth, 46, hadn't heard from her family in a year, creating in her uncontrollable fear and inner turmoil. She became overprotective and wouldn't let her children out of sight. One time, Elizabeth burst into Jamel's elementary school classroom, terrified that something had happened to her.

All she could do was scream when her brother finally called. Except for one sister, the family was safe.

"Get us out. Try to get us out," her brother kept repeating.

Life was never easy in Liberia, and Elizabeth's family has always been poor. In fifth grade, she began cleaning and cooking at a school run by missionaries in exchange for tuition.

But at least the country had rules and peace back then, Elizabeth said. There was electricity, infrastructure and hope. A different feeling than the desperation she heard in her brother's voice.

Haunted by her brother's words, Elizabeth tried to get her remaining eight siblings out of the country. But only her mother and brother were granted U.S. visas.

"God gave us life to see this day," Sigah said. But "since I left eight years ago, they are still fighting."

She is not convinced the two-year cease-fire has brought peace.

Five years ago, the Russells moved from Fort Collins to Aurora, where Elizabeth is a real estate agent and Primus is a teacher.

Elizabeth still translates for her mother, who goes on and on in her native tongue about the brutality. She tells about how they drank from water that ran over dead bodies, the constant gunfire and teenagers toting AK-47s.

"After all of that, would you ever want to go back to Liberia?"

Sigah's answer is understood without translation. She plans to return in December if Tuesday's elections go well.

Sigah was recently in Minnesota, which has a large population of Liberian refugees. There, with women she knew from back home, she fasted and prayed for a successful election.

But she wouldn't vote even if she were there.

"We elected Charles Taylor, and he killed my whole family. He killed one person, but it was like he killed the whole family," Sigah said.

She had another nightmare last night. All she can do is pray, she said, for God to put into power the person He chooses.

>> 464,000 people in Liberia have been displaced by persecution, armed conflict or widespread violence.

This story has been posted in the following forums: : Headlines; COS - Liberia