Peace Corps service is a family affair for Jack Rayman 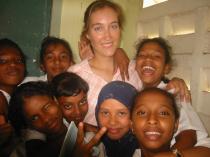 The Raymans both taught at Rajang Teachers College in Bintang, Sarawak, Malaysia, from 1967 to 1970. While Jack taught English and subsistence-level agriculture, Barbara taught educational psychology and ran the library. These experiences helped to solidify the Raymans' commitment to education, but for Jack, who had grown up on a farm "in the middle of nowhere" in Iowa, the Peace Corps offered an unprecedented opportunity to transcend his own background and culture.

Peace Corps service is a family affair for Jack Rayman

University Park, Pa. -- It's a long way from the rainforests of Sarawak, Malaysia, to the gentle mountains of State College, Pa., but Jack Rayman has traversed them both and many lands in between in his formative journey from a fresh-faced Peace Corps volunteer in the 1960s to his current role as administrator in charge of Penn State's Peace Corps recruiting office.

"My Peace Corps experience affected my life profoundly, as it has for so many others," said Rayman, who oversees the in-house branch of the government service agency under the aegis of his position as director of Penn State Career Services.

The Peace Corps was established in 1961 by President John F. Kennedy, who challenged college students to cultivate peaceful ties with the international community by living and working in developing countries. From that inspiration grew an agency of the federal government devoted to forging international relationships though education, agriculture, business, healthcare and other necessities that enhance the lives of struggling communities worldwide. Colleges and universities such as Penn State have partnered with the agency ever since to recruit volunteers who have brought Kennedy's dream to fruition.

A dedicated administrator and researcher in the fields of counseling psychology and education, Rayman believes his Peace Corps experience helped to delineate his path in life.

"I think I could have ended up in business, as the classic American pyramid-climber type, but when you see how most of the rest of the world lives, it alters your course and helps you realize what's important in your life," he said.

Rayman is one of the more-than 178,000 Peace Corps volunteers to serve in 138 countries since the program's inception. Penn State alone has seen almost 800 of its alumni serve in more than 100 countries.

Penn State ranked 12th among colleges and universities with the most alumni volunteers working overseas for the organization. With 61 alumni serving in 2004, the University became the only Pennsylvania institution to rank among the top 25 on this list.

In February, Rayman was invited to a recognition ceremony by Pennsylvania Gov. Edward G. Rendell to represent the 5,807 Pennsylvanians who have served in the Peace Corps throughout the agency's history.

Rayman was selected for this honor not only because of his connection to the substantial Penn State Peace Corps contingent, but also due to a connection that hits closer to home -- quite literally. All members of Rayman's immediate family -- his wife, Barbara, a senior pre-law adviser for Penn State's Division of Undergraduate Education, and his daughters, Jamie and Megan, both Penn State alumnae -- have served in the Peace Corps.

Three weeks after their marriage in 1967, Rayman and his wife set off on a decidedly unusual honeymoon when they started their Peace Corps adventure in Southeast Asia.

The Raymans both taught at Rajang Teachers College in Bintang, Sarawak, Malaysia, from 1967 to 1970. While Jack taught English and subsistence-level agriculture, Barbara taught educational psychology and ran the library. These experiences helped to solidify the Raymans' commitment to education, but for Jack, who had grown up on a farm "in the middle of nowhere" in Iowa, the Peace Corps offered an unprecedented opportunity to transcend his own background and culture.

"What the Peace Corps does is allow you to step outside of your own society for an extended period of time -- long enough to begin to look with some objectivity on your own experiences," he said.

"If you live in another country for a couple of years and you live with the people and work with the people and speak their language, it gives you perspective you can't find anywhere else. Ultimately, you learn more about yourself because you can transcend what you thought society was telling you to be."

Growing up with a Peace Corps sticker on her tricycle, Megan Rayman, a 2001 Penn State kinesiology graduate, knew overseas service would play an integral role in her life at some point. In June 2002, she began her own Peace Corps experience working in health education at a rural health center and hospital and serving as a secondary school teacher in the South American country of Guyana. For the past year, she has worked for the minister of health in Guyana's capital, Georgetown. Inspired by her Peace Corps experience, Megan is planning to earn an advanced degree in public health.

Similarly spurred by her own Peace Corps experience, Jamie Rayman, who graduated from Penn State in 1999 with a major in biology and minors in women's studies and international agriculture, is completing a master of public health degree while serving as international programming coordinator in the Office of International Services at the University of Pittsburgh. Jamie taught science at Nsein Secondary School in Ghana, Africa, from May 1999 to August 2001 as a Peace Corps volunteer.

"The Peace Corps has afforded my family and hundreds of Penn State alumni a truly unique opportunity for personal and professional growth while enriching our lives with the lessons and memories gifted to us by the individuals we met throughout our time abroad," said Jack Rayman. "These experiences are invaluable."

Penn State's Peace Corps Recruiting Office offers students or alumni interested in volunteering the opportunity to talk face-to-face with an experienced recruiter who can answer questions and provide guidance through the application process. In addition, the office coordinates a networking program to connect those interested in joining the Peace Corps with volunteers returned from their service.

"Penn State offers the Peace Corps a great pool of applicants who have had technical training in fields we need," said Jason Bedford, the University's on-campus recruiter. "The University sees volunteerism as a major aim for students to get pertinent world experience and to foster a trend toward altruism."

To learn more about Penn State's Peace Corps initiatives, offered through the University's Career Services, visit http://www.sa.psu.edu/career/peacecorps/ or contact Bedford at (814) 865-2377 or peacecorps@sa.psu.edu.

This story has been posted in the following forums: : Headlines; COS - Guyana; COS - Malaysia; Married Couples