Niger RPCV Bill Thomas to be Country director for Jordan 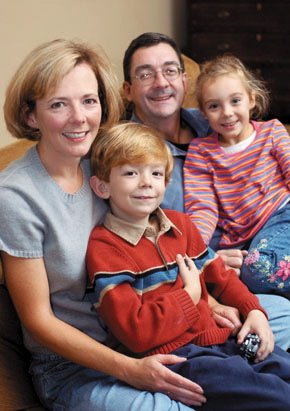 "I had a good experience in Niger. I was able to learn French, I learned a lot about the culture and it was just great. And when it was over I was ready to come back home and get more practical business training and experience."

Niger RPCV Bill Thomas to be Country director for Jordan

Do they sell their big, comfortable homes and start packing clothes and pictures and a few mementoes that will make them feel at home in a new furnished apartment halfway around the world and just go?

But some adventurous types ...

Well, at least one Salisbury family is about to do all that.

And as much as they don't like goodbyes, Bill and Leslie Thomas are excited about the new life in store for them and their son, Gray, who's 7, and daughter, Natalie, who's 6.

They're going to Amman, Jordan.

For how long? Who knows?

But they know they're going.

They've already sold their house on Colonial Drive to Steve and Robin Fisher, who now live five or six houses down the street.

The Fishers have already sold their house, Leslie says, "to another wonderful family ... "

And Bill will leave Saturday for two weeks of training in Washington — and then board a plane for Jordan.

Family adventure: Bill Thomas with his wife Leslie will be taking 6-year-old daughter Natalie and 7-year-old son Gray along on their Peace Corps adventure. Photo by Joey Benton, Salisbury Post

"I'll fly out the end of November," Leslie says, with the children and her 80-year-old mother, Frances McNair of Charlotte.

Not that Grandma is going to stay.

"The plan is for her to spend about three months and then come back — unless she decides she likes it."

After all, this will be Bill's second adventure with the Peace Corps.

His family, he explains, had foreign exchange students in their home when he was growing up — one from Sweden and another from Switzerland — and he spent his final college semester at Cambridge in England and traveled throughout Europe, so nobody was really surprised when he decided to join the Peace Corps right after he finished the University of Virginia with a degree in English literature.

"I wanted to have a chance to live abroad for a longer period of time, to learn a foreign language. I thought it was a good altruistic thing to do, a good life experience. I was looking for adventure, part of the adventure I think life should be."

And the Peace Corps sent him to Niger in western Africa.

"I went to work doing fisheries resource management, which translates to weighing and measuring a lot of fish.

"I had a good experience in Niger. I was able to learn French, I learned a lot about the culture and it was just great. And when it was over I was ready to come back home and get more practical business training and experience."

When he got back, he went to the University of Wisconsin for a master's degree in business and got a job with Ralston Purina, which sent him to St. Louis, where he met Leslie.

Her family had also had foreign exchange students through the Friendship Force program when she was growing up.

"We had a student from France and then a student and her mother from Amsterdam for a month," she says, "and I traveled abroad with my family a little bit, mostly during vacation, in Central and South America, but I never had the experience Bill had."

A graduate of the University of North Carolina at Chapel Hill with a degree in journalism, she worked in marketing for a credit union and then for Wachovia Bank in Winston-Salem and Charlotte, got a master's degree from UNC in business and was ultimately recruited by Boatmen's Bank in St. Louis.

"And I moved there," she says — and didn't know anybody. But within a couple of months she met Bill.

He was happy working as national director of marketing for Food Lion's 1,200-plus stores. Leslie was happy on the staff of Bank of America.

Life was good — and they had no idea it was going to change when they decided to take the children to Belize and Guatemala for Christmas last year.

"It was the first time we have not been with our families at Christmas," she says. "And it was a hard choice."

But they were both working and the children were in school, "and we just kind of wanted it. We wanted the children to realize it's not all about the gifts, though we took things to give to children who live there who don't have as much as we do.

"They each got a stocking on Christmas Day, and it was pretty simple, but it gave us a lot of time together, 10 or 11 days. And while we were there we took a lot of time to think about what we were doing with our lives. We wanted more time with our children. We wanted to do something more satisfying, more rewarding, more important than the work we do ....

"I'd worked for a bank most of my adult life, and at the end of the day, how meaningful is that? You get a nice pay check, but life is not how much stuff we have and how much money we have.

"A lot of people are shocked at our timing. They'll say, 'We want to do that, but we want to wait until the kids are grown.'

"That didn't seem like the right timing to us. We wanted to enjoy the kids now and wanted them to have the experience, but the older they'd get, they'd kill us if we were moving them around the world.

"We thought we were still young enough to enjoy it and have the energy for it. It's going to be a shock to us and to them because of how much we've had — so many friends and good jobs.

"But it makes sense to us to let go of those things because we think we'll be ultimately getting more."

"We're very much a team," Bill says. "We'd had a great experience in Belize, and we realized the international experience was important for us. We'd had good jobs for some time, so financially we'd be able to take care of our children and our future, so making more and more money wasn't the issue. We could take care of ourselves with what we have.

"So what means more to us? To climb up the corporate ladder? Travel more? Or we could take a pay cut and have a different experience that would be more rewarding, more important than pushing groceries and checking accounts ...."

But friends had questions.

Health could become an issue.

"It would be nice to think we're all going to be here together, but we're not. We don't want to risk waiting. Life is short," Leslie says. "You can't wait to know it's something important."

"In August '04," Bill says, "one of my best friends died of a brain tumor, and that pointed out that waiting until we retire ... "

Maybe they'd never get that far.

"I was fortunate," Bill says. "I'd had the experience with the Peace Corps, and I felt positive about their goals and aims and mission and professionalism.

"The Peace Corps has an altruistic goal. And I had a healthy, strong work experience from my work that would be beneficial to the Peace Corps."

A volunteer can't have children.

But Peace Corps administrators can.

He saw an opportunity on the Peace Corps' Web site and made haste — and he's going to be an assistant director for the Peace Corps operations for Jordan.

"My biggest concern was the safety issue," so he talked a lot with Frank DeLoache, a fellow church member at St. John's Lutheran Church, who had been there, "and his real life experience helped me get comfortable."

"I actually thought our chances were that we'd end up in Africa," Leslie says, "but that just didn't happen. The Jordan opportunity came up, and he got the offer.

"I feel like we're lucky. From a Peace Corps perspective we're going to a pretty plush spot. I'll probably volunteer where my children go to school."

At least the first year she expects to concentrate on volunteering in different groups "to help us and our children get integrated into the community.

"We're very lucky. The position Bill has will last for two and a half years.

"The furniture? We'll fly it there, ship it on a boat, or store it. Our apartment will be furnished, so we're just taking things that make us feel more at home — pictures, decorative items, books, just to make it real homey."

"When we knew we were going to go abroad the later part of July," she says, "I quit work."

And what a difference that made!

"My children have always been under the care of others," she says, because she was working. "For the first time in my life I haven't worked. I've been able to spend more time with them."

And she'll have time for company.

"We're expecting all our friends to come visit," she says. "We're right across the river from Egypt."

They've read the books and looked at the pictures.

"And Jordan," Leslie promises, even if she hasn't been there yet, "is beautiful."

And their welcome mat is waiting.

This story has been posted in the following forums: : Headlines; COS - Niger; COS - Jordan; Country directors - Jordan