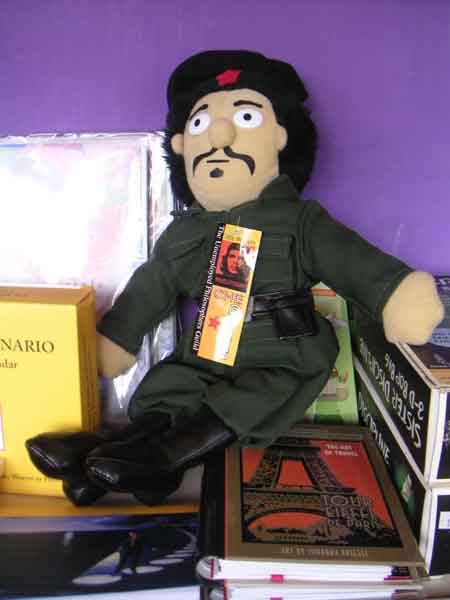 "Dear Mr. Nordlinger: I thought of you last week as I finished a tour of Cincinnati's new National Underground Railroad Freedom Center and stood in the gift shop staring at a plush Che doll ('What the . . .?!'). Having just come from the 'Un-Freedom' exhibit, highlighting present injustices around the world, I found the cuddly, Muppet-like toy particularly ghastly and absurd. I will show you a picture of what I saw: here. Was this inclusion the result of ignorance? Probably. Did I leave the museum with less respect for its keepers and content? Yep."

I'd like to publish some letters concerning Che Guevara, prompted by my piece in the current issue of NR, entitled "Che Chic." I found these letters — and more, that I am unable to publish — extraordinary, for various reasons.

Thank you to all who wrote, and who do write. I wish I had time to read and answer everyone as I should.

"Dear Jay: Che Guevara was also the architect of La Violencia in rural Colombia in 1962-64. La Violencia's most infamous activities included stopping busloads of Colombian peasants and slitting the throats of women and children and then kidnapping young boys to train in their guerrilla army. I know this because I was a Peace Corps Volunteer in Colombia from 1962 to 1964."

"Dear Mr. Nordlinger: I thought of you last week as I finished a tour of Cincinnati's new National Underground Railroad Freedom Center and stood in the gift shop staring at a plush Che doll ('What the . . .?!'). Having just come from the 'Un-Freedom' exhibit, highlighting present injustices around the world, I found the cuddly, Muppet-like toy particularly ghastly and absurd. I will show you a picture of what I saw: here. Was this inclusion the result of ignorance? Probably. Did I leave the museum with less respect for its keepers and content? Yep.

"The museum workers were all so sweet and kind, I didn't want to confront them there, so I wrote a letter."

"Hey, Jay: My dad graduated from Georgia Tech here in Atlanta so I grew up a Tech fan and frequent their website. I was on the site today, and one of the pictures on their home page showed students standing around a statue of Guevara in Cuba. If you hold your mouse on the picture, the caption reads, 'Studying abroad in Cuba.' There are smiles all around, and Guevara is holding a small child. I was quite disheartened and showed my wife the picture, at which she quipped, 'I wonder if, after holding the child, he killed it.'"

"Dear Mr. Nordlinger: I read your article after returning from a week in Cuba with a group sponsored by my synagogue. The purpose of our mission was to support the remnants of Jewish communities in Havana and elsewhere.

"I fell in Havana on the first day of our trip, and I suffered a head wound and lots of bruises. This enabled me to see firsthand the vaunted Cuban medical system. Imagine having a swollen hand but no ice at the hospital to treat it. (But there is ice at the tourist hotels!) I was placed in a hallway, suffered through a 20-minute power blackout, and was sutured while lying on a metal gurney with only my head protected by a sheet of brown paper. The man on the next gurney was having his stomach stitched after a knife fight. There were no 'privacy' curtains. There were also no blankets, and the hospital had no medicine. We had to go to an 'all night' pharmacy — which was behind someone's apartment door — to get the only antibiotic available: tetracycline.

"There were pictures of Che all over Cuba — on billboards, postcards, and calendars. Our tour-bus driver had Che's picture attached to his inside window. Santa Clara has a huge monument to Che, and the Museum of the Revolution is filled with 'romantic' images of this butcher. All of the billboards in Cuba spouted Castro's propaganda. [Here follows a long, sad description of the country, and the dangers its people constantly face.]

"Needless to say, I was glad to return to the United States. In fact, when I got off the plane in Miami, I literally kissed the ground. We are very lucky."

"Jay, the Left admires anyone who kills and tortures on a sufficiently grand scale in furtherance of the great utopian dream, but the tedious day-to-day routine of actually running a Communist state dims the luster somewhat. That's why you can always find Trotskyite factions, but will almost never find a self-described Stalinist among Western leftists. To the Left, Castro is Marlon Brando, revered for his total body of work; but Guevara is James Dean, who never compromised his hipness by getting old and fat."

I wish I had written that.

"Jay, so few Americans take the time to put learning a little history before what may be fashionable. Thirteen years ago, I made this mistake, as a rebellious teenager in love with all things 'anti-establishment.' It took the words of my father to stop my purchase of a Rage Against the Machine T-shirt with Guevara's likeness emblazoned upon it. 'I won't have my son wearing a shirt that glorifies a Communist thug who murdered and oppressed thousands of innocent people whose only crime was to seek the freedom you have to buy this piece of s*** at the mall.'

"As I get older I can only look back and thank those who have tried to put the substance of the world, instead of the style, in front of me. I'm also thankful that my Old Man doesn't rub it in — too much."

"Dear Mr. Nordlinger: I currently attend a local liberal arts college where I am double major in international studies and history. As part of my international studies major I was required to take a modern Latin America class last spring. During the class we studied Guevara as if he had been an idealistic, revolutionary hero fighting for the disenfranchised, U.S.-oppressed people of Cuba. Admittedly I knew very little of Guevara but searched out additional information beyond class due to my ever-increasing distrust of the professor. You can imagine my feelings after discovering who Guevara really was in contrast to the opinions of my very liberal professor and the political propaganda that we received in class."

What a wonderful student. But how many are like her? And why should they have to fight and scramble so to learn — or rather, to unlearn what they are paying to learn?

Finally, readers wonder where to go to get that "Mickey Guevara" T-shirt, the shirt with the Mouse's ears on that "iconic" face of Che: You go to www.thedissidentfrogman.com!

This story has been posted in the following forums: : Headlines; COS - Colombia; Cuba; Latin American Issues; Cult