Cindy Tews used her Peace Corps experience in Botswana to compose a decor that's a little bit African, a tad British West Indies, a shade shabby chic and a lot relaxing and inviting 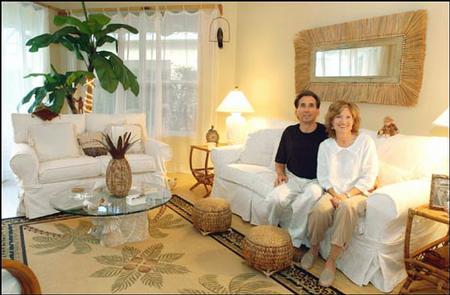 The African spirit thrives in the family room with a carved giraffe on the floor and an elephant artwork on the wall. An heirloom carved mask occupies another wall.

Cindy Tews used her Peace Corps experience in Botswana to compose a decor that's a little bit African, a tad British West Indies, a shade shabby chic and a lot relaxing and inviting

Cindy Tews used her Peace Corps experience in Botswana to compose a decor that's a little bit African, a tad British West Indies, a shade shabby chic and a lot relaxing and inviting.

"I have no style," quipped her husband, Paul Tews. "Cindy has lots of it. So I was okay with her plans for our new home."

The former St. Paul, Minn. residents said they bought their villa in Wilshire Lakes because of a blizzard.

"We were readying an investment condo in the front of the community for rental when we heard from friends that it was snowing hard in St. Paul," Cindy Tews recalled.

"The sun was shining here and Paul was in the pool. I have family here. We love the pines in the community and the handy location. I just didn't want to go back."

Instead, the couple, who admit they can be impulsive, bought a villa model they'd been eyeing in the back of the community and decided to make Collier County their permanent home.

Paul Tews rightly expected no difficulty in getting a job as a business and marketing teacher. His wife decided to leave her job in job placement for disabled people and become a certified teacher. The duo now works at Palmetto Ridge High School, he in his specialty and she as an exceptional student job placement and volunteer coordinator and career advisor.

When school's out, the pair retreat to the home they customized from top to bottom.

"First we painted all the white walls, mostly in shades of gold, " said Cindy Tews. "Then we painted them again, in slightly deeper tones." They confess they're smitten with a gold shade of paint called Rhino Tusk that decorates the master suite.

Professionals transformed the sprayed concrete driveway and pool deck from boring to becoming with a terra cotta, etched-stone effect.

"At first, we had white carpet throughout the house," Cindy Tews noted, "but we both disliked it. "Even the cats, Harry and Christopher, didn't like it," she said with a laugh.

But the felines gave purrs of approval to the bamboo laminate that replaced the carpet in almost every room, and they like to hang out on the metal bistro table and chairs the couple put in their recently screened front entry. 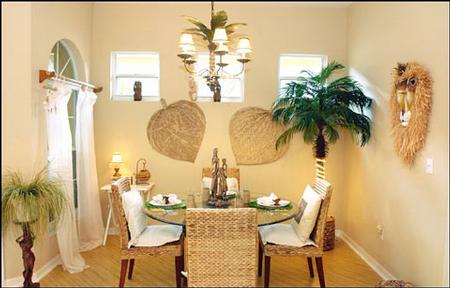 "The screening was one way to create another little living space and add some character to our home," Paul Tews explained.

Another personality enhancer was a generous dollop of whimsy, starting with the carved monkeys in the dining room.

Although that formal space is distinguished by high-back sea grass chairs and a metal leaf chandelier, a trio of carved simians perch on the window sills, and a single chimp dangles from the iron leaf chandelier.

A twinkle-lighted palm tree and a lion artwork purchased at a local art show heighten the lighthearted spirit. The lion's grassy mane is reprised in the grass-framed mirror hanging above the living room sofa.

"We got the slipcovered sofa and loveseat at Pottery Barn," Cindy Tews reported. "We already had the elephant-base coffee table and we bought the palm-print sisal area rug to go with our tropical theme."

A multi-drawered wicker chest made of tea-stain wicker accompanies a rattan chair and dark rattan end tables to convey the British West Indies influence i the formal living room.

"The government was offering money to villages that improved their facilities," she explained. "I hired people to do the work and bought materials. The villagers did get the government money for their accomplishments."

She got to do some traveling and bring back mementoes. Botswana baskets and a photo of the Kalahari Game Reserve embellish the master bath, where jungle cats roam on the wallpaper.

Other African baskets and Botswana carvings stand on the kitchen plant ledge, accompanied by a St. Paul-purchased alligator and complimented by a center island embellished with matchstick bamboo.

"We put the matchstick — bought at Home Depot — on the island and under the breakfast bar to combat so much whiteness and to increase our African ambience," Paul Tews stated. "We also had our family room floor tiled when we did away with the carpet."

The family room is home to a huge white wicker armoire the couple purchased at a local consignment shop.

"My mom, who lives in Naples, found it and we bought it over the phone," said Cindy Tews. "She's a great shopping scout. We bought our wicker patio set the same way when she called us from the White Elephant. I painted it ivory and got the palm-print cushions at Target."

Palm prints figure largely in this home's accents. They're on the rattan barstools next to the breakfast bar in the kitchen. They're on the iron bed's quilt in the master bedroom, where distressed painted furniture, a Tommy Bahama armoire and mosquito netting deliver the tropical mood.

They're also on the quilts on the guest room's beds, which are separated by a wicker chest and topped by mosquito netting canopies.

To intensify the tropical theme, plantation shutters cover some windows and white, puddled sheers on large bamboo poles cover others. A brightly-painted, metal palm tree decorates the wall across from the L-shaped pool.

The African spirit thrives in the family room with a carved giraffe on the floor and an elephant artwork on the wall. An heirloom carved mask occupies another wall.

A vintage hat rack Cindy Tews painted white gives British West Indies cachet to the foyer, and the shabby chic motif is served by the ivory slipcovers on the sleeper sofa in the office where Paul Tews likes to work.

"That's my special place to be creative in designing my lesson plans," he confided. "Cindy came up with all the creative ideas that make our home what it is. I'm happy to sign off on all her great ideas and use what ingenuity I have for my students."

But do the teachers whip up African dishes or cook Caribbean cuisine?

They share a conspirational look and reply that they're both very fond of school lunches.

This story has been posted in the following forums: : Headlines; COS - Botswana; Decoration